So Melissa, my former boss who urban-evacuated herself to the side of some mountain up near Ball Ground, and I were walking around the Marietta Square with the baby, figuring that one of the many restaurants there would tempt us. I had mentioned that there was an alleged Australian bakery there, and no sooner did her eyebrows raise did I realize that I had no idea what the heck that meant, either. Was this a place we could go to try one of those vegemite sandwiches that Men at Work sang about, or just a place that sells cookies shaped like koala bears?

It turns out it’s really more of the former, but while I didn’t see any koalas in the display case, you can get cookies shaped like the continent of Australia. Well, of course.

This isn’t entirely a silly affectation. The bakery is run by Mark Allen and Neville Steel, two childhood friends from the town of Boort, who met again in the late seventies studying at William Angliss Food College in Melbourne. Various explorations in the food business followed, with Allen moving to the US in 1991. Here (apparently on the west coast), he introduced Americans to the Australian meat pie, a sensibly-portioned single serving of various meats and fillings baked in a wonderful crust. Allen and Steel reunited in Marietta in 2001 to bring these meat pies to the east coast, and provide a stopping point for homesick ex-pats. It’s their contention that many Australians and New Zealanders swing by on visits through Georgia for a taste of home, and to pick up some Australian groceries, including, of course, jars of vegemite. 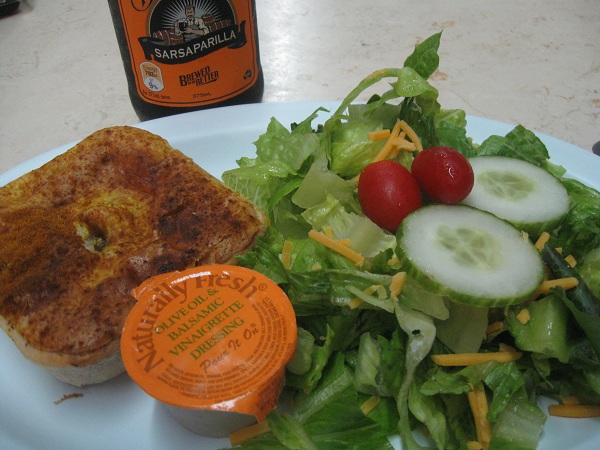 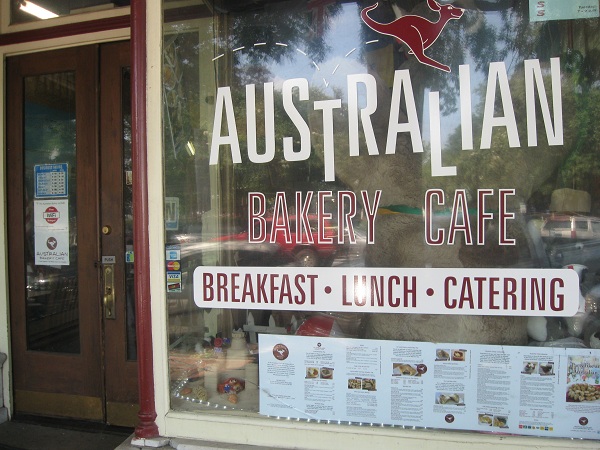 Melissa and I stopped by on a Thursday and there was a pretty good lunch crowd. The shop is decorated with as much over-the-top Australian memorabilia as is possible, including flags of each of that country’s states hanging from the ceiling. The staff is incredibly friendly and nice, and did an appropriate job admiring my baby.

I had the lamb curry pie with a side salad and thought it was just splendid. It really wasn’t at all spicy, which my tongue was craving, but it was seasoned just right and satisfied me all the same. The crust was just super flaky and it tasted so fresh. It left me very curious what their dessert pies are like. I washed this down with a terrific Bundeberg brand sarsaparilla, which Melissa grabbed by mistake when reaching for the ginger beer. It was lighter than I expected, but I bet it goes great over ice cream.

I probably should have taken some home. A glance over the grocery shelves turns up all sorts of unusual goodies, from sodas to the yeast spreads to fun-looking candies with silly names (Tim Tams?). I may have to stop in again sometime and do a little shopping.