So Community Q opened better than two years ago, and it’s taken me this long to check it out. The praise has not quite been unanimous – among others, Foodie Buddha was underwhelmed by it in December of ’09 – but enough of my fellow hobbyists have been clear in their praise that I figured it warranted a try, especially since my most recent barbecue trip had been pretty unsatisfying.

Enthusiasts who write blogs probably already know the restaurant’s story. Owner David Roberts had worked at the old Sam & Dave’s in Cobb County. When that duo split up and Sam went one way and Dave Poe went the other, Roberts found himself some new partners and an intown location just a short walk from Wuxtry Records in Decatur. They’re smoking up some very, very good pulled pork here, but the sides might be the star attraction. 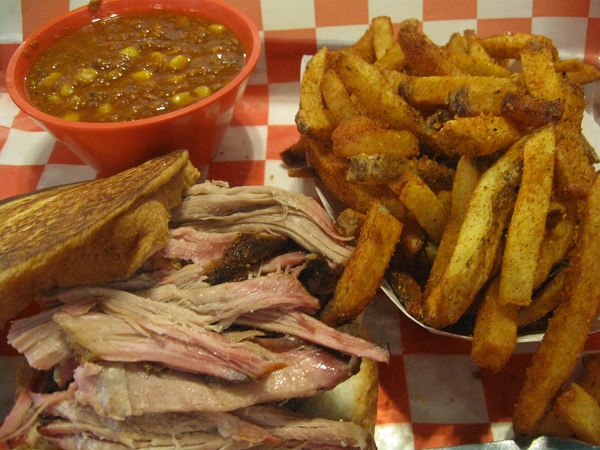 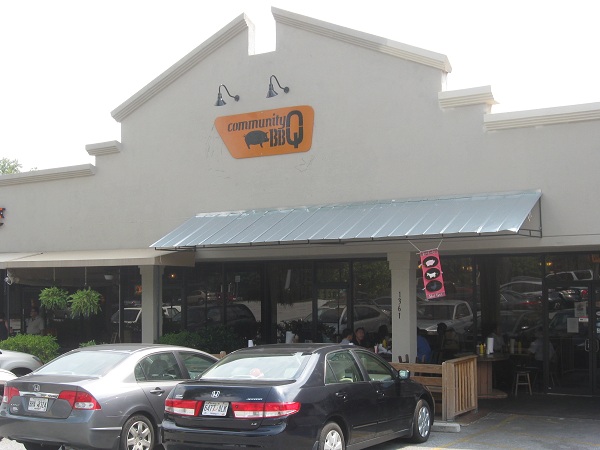 The restaurant’s been on my wishlist for a little while, but I guess it took a disappointment to get me kickstarted. I had a short morning at work a couple of Thursdays back, so I took the Dorothy L. Sayers that I was finishing over for an early lunch. I arrived just as they opened and enjoyed a very good meal.

I ordered the pulled pork plate with Brunswick stew and fries. Reading what others have said, and looking at the wonderful pictures online, it looked, after that first visit, like I really missed out by not trying the mac and cheese or the slaw, both of which appeared completely wonderful to me. Happily, the stew was really good. It was meaty, rich and, truly, the best I’d enjoyed in several weeks. The fries were fresh cut and liberally dusted with rib rub. Killer. These are every bit as good as the fries we had a couple of weeks previously at Southern Soul Barbeque on Saint Simons, and those were terrific. All they needed was a nice mustard sauce for a dip.

Speaking of sauces, they have two on the table. Neither completely thrilled me, but they were both perfectly good. I felt the vinegar sauce was just a bit milder than I prefer, but the sweet brown sauce was very nicely balanced and complemented the meat very well. This was very good pulled pork, nicely smoked and moist. Yet I read that the brisket is even better. Obviously, another trip was needed. So a week later, I returned. 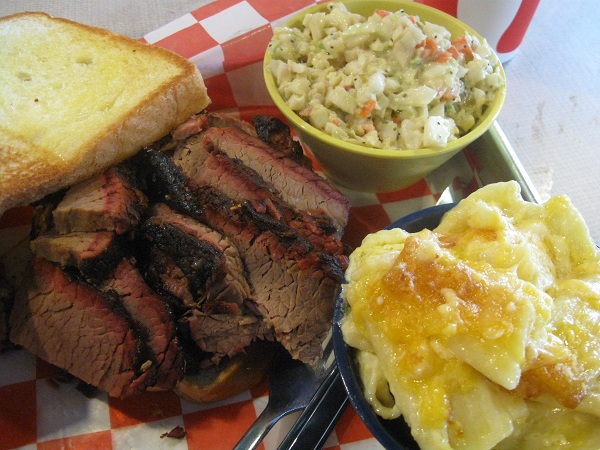 The second visit was not quite as good as the first, sad to say, although that really is some terrific beef brisket. I think that I just prefer the pork a little bit more, although either would be a fine choice. The slaw is a real surprise for this region, as it is considerably more vinegary than most in the city. The mac and cheese, on the other hand, I did not like at all. It was really heavy and oily and not at all pleasant. I’d have done better to stick with the fries!

My service at both visits was very attentive and friendly. This is clearly a place where the staff is enjoying their job and passing their enthusiasm around the store. Plus, there’s one other thing that I liked about this place a lot: the prices on the menu board include tax. Why the heck doesn’t everybody do this?

Other blog posts about Community Q: