I feel that we need to ramp up the barbecue reviews here over the next few weeks if we’re going to hit my goal of one hundred barbecue restaurants before the end of the year. We’re about twenty shy with three months to go, and I think it’s doable. Of course, we also have to get back on a reasonable schedule without these increasingly ridiculous month-long lags between eating and posting a blog chapter.

I also feel that, doing that, we’re going to run into some more restaurants where I’m going to leave unsatisfied. Now, negative reviews run counter to this blog’s theme, I think, and we have certainly scrapped several planned chapters to our story when a restaurant failed to meet our expectations, but every once in a while, we run into a place that does some things quite well, but the overall experience is really lacking, to the point that I find it more frustrating than disappointing. So both this week, and next, I feel that I should share a story of why a restaurant let me down.

With that in mind, it was indeed a month ago that Samantha joined us for a drive over to Roswell to revisit Swallow at the Hollow, a place I have not been in a really long time. I recall thinking that it was not bad, but this was a long time back. I was reminded of it when a new blogger, The Georgia Barbecue Hunt, stopped by Swallow at the Hollow at the beginning of August. A couple of days later, the indefatigable Food Near Snellville, whom you all really should be reading, left a cautionary note on his own blog that the Swallow’s many fans have a tendency to defend their favorite restaurant with some vigor, especially when the subject of that restaurant’s ribs, and whether they are smoked or broiled, comes up.

Just as well none of our group had any ribs, then. I sure would hate to say anything controversial. On a related note, this restaurant serves the single worst barbecue sauce of any I have ever tried, anywhere, in thirteen years of yammering about barbecue restaurants on the internet. 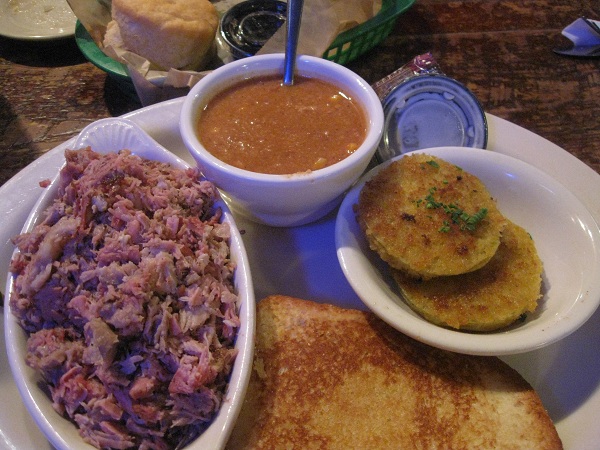 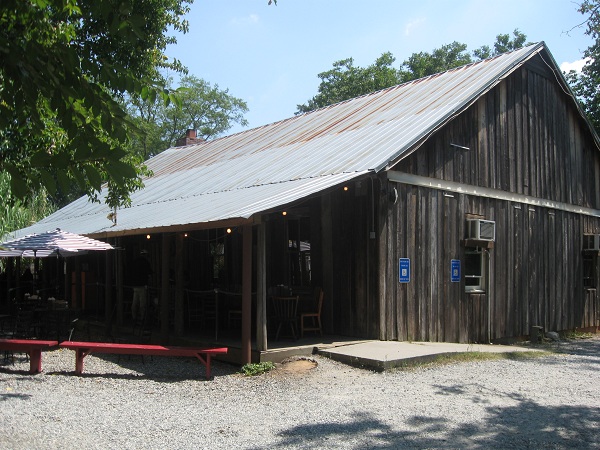 I’ll get the good stuff out of the way, because some facets of our meal were really quite good. The sides were all completely delicious. Best of all were the collard greens, which might well put anybody else’s in the city to shame, but the baked three beans were really tasty, and I was quite taken with the Brunswick stew, which was thick and orange and tasted equally of corn and tomato. I’ve been told that some of their specials are cooked up in conjunction with Greenwood’s, the restaurant across the street, or that perhaps they share some recipes? They boast that almost everything here is fresh and homemade, the exception being the fries, which are frozen. I’ve taken to asking about that before I order these days. I figure that I’ve had enough Sysco fries – I said the S word! – in my life; I love fries, but I’d rather try what the restaurant can make themselves. Here, the fried green tomatoes are better than most, if perhaps a little thicker and softer than I’ve usually had them. As far as vegetables and stew, this place is a winner.

The first disappointment, and it was a medium-sized one, came with the music. Most evenings, this place features live sets from up-and-coming country music stars, apparently in collaboration with Nashville’s popular Bluebird Cafe. It’s a terrific venue for them; the building is a lovably unphotogenic big shack with a tin roof and wooden walls lined with autographed glossies. As we came for lunch, I knew that we’d miss the live music, but I was still expecting country to be played above us, and not “threefer” sets by disagreeable dinosaurs like Journey and Aerosmith from some Sirius classic rawk radio station. On the other hand, we learned that my daughter, thanks to Glee, knows all of these songs despite never actually listening to classic rawk radio.

The chopped pork was, at best, decent. I have had worse. It was not at all smoky, but it was moist and not offensive. The problem, if I may be bold, is that when pork lacks a good, smoky punch, then a good sauce that complements it well can bring it back to life and make an average meal memorable. I don’t know that I would enjoy the chopped pork at Speedi-Pig in Fayetteville dry at all; it’s the addition of that good brown sauce that gives it life.

All of the sauces at the Swallow disappointed me. There are three, and the vinegar, which splashes red all over the pink meat, was the best of them, but please don’t consider that a compliment. The mustard might not have been bad on other meat, but it didn’t go well with this. The thick brown sweet sauce would go well over ice cream. It is criminally unsuited for this, or indeed any meat. The best thing that I can say about it is that it seems to have permanently cured my daughter of her infernal habit of drowning her Brunswick stew with sauce. Like the bull-in-a-China-shop twelve year-old she is, she just stampeded into squeezing about an ounce into her bowl without sampling either, not realizing that this stuff has more business in a milkshake than in stew, and retched and choked down her bowl in order to get some dessert. 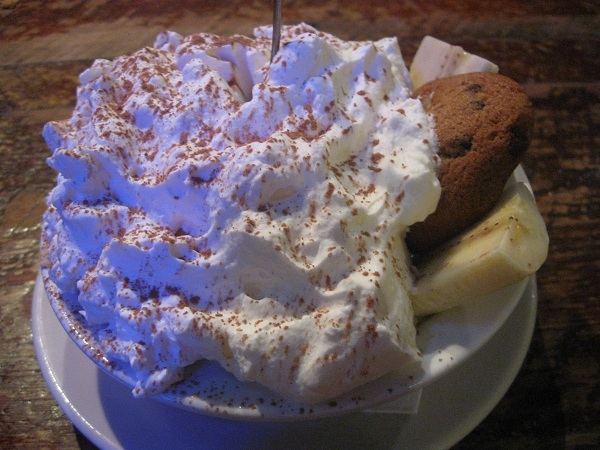 Whatever their failings with the meat and sauce, the Swallow is notable for their sides, and also their desserts. My daughter and Samantha each had this decadent chocolate banana pudding, and Marie enjoyed a slice of blackberry pie. I tasted each and can confirm that they were amazing.

This brings us to the final disappointment: the check. The pie was more expensive than the slices we had the previous night at Buckhead’s Pie Shop. A chopped pork plate here costs a shocking $13.50 before tax and tip, an amazingly high price for such mediocre meat. I understand that Roswell might be thought a little pricier of a place to eat than Summerville, but that is, literally, more than twice the price for the same amount of better food at a superior barbecue restaurant, Armstrong’s, in that city. A few weeks later, I also had a massively superior plate of barbecue at Big Al’s BBQ Pit in Statham for, again, less than half the cost of this. Put another way, even factoring in the Buckhead pay lot, we spent less money ITP the previous night going to both Smashburger and Pie Shop than we did with a single lunchtime trip to Roswell, where less food was ordered.

I was genuinely pleased with the sides and the dessert. Collards this good should be tracked down, and we could be here all day listing places with poorer fried green tomatoes. As a destination for southern vegetables, meals at the Swallow at the Hollow should be encouraged. I could happily return and try a three-veggie plate here one evening listening to live country if the opportunity arises.

But this barbecue, I certainly won’t order again. Marie took a good portion of hers home to reheat for lunch. She intended to try it with some of the Dreamland sauce that we keep in the fridge for just such an occasion. It was still mediocre and overpriced, as Samantha judged it, but Dreamland sauce at least made it tolerable.

Other blog posts about Swallow at the Hollow: