(Honeymoon flashback: In July 2009, Marie and I took a road trip up to Montreal and back, enjoying some really terrific meals over our ten-day expedition. I’ve selected some of those great restaurants, and, on the first day of the month, we have been telling you about them.)

A couple of weeks ago, when I wrote about Old Clinton Bar-B-Q, I had cause to mention a wonderful book by John T. Edge called Southern Belly. If you enjoy the hobby of road tripping and eating and loving our culture, then you definitely need to buy this book! Our friends CB and Elizabeth gave it to us along with some other great books as a wedding present, and when I was mapping out our trip, I consulted both the first print edition of Diners, Drive-Ins and Dives and Southern Belly for inspiration about where we should stop. I found Southern Kitchen in New Market within its pages, and realized that the best way to get from Baltimore to Asheville would take us right by it.

We left Baltimore in the late morning, having no idea what would befall us on the northern “beltway” around Washington, D.C. As everybody who has ever fought around this monster trying to get to I-66 on the west side of town knows, it is a complete logjam whenever the sun is up. We grumbled and scowled through what felt like hours of gridlock before we finally got a move on. I-66 runs through very pretty country before reaching I-81. Of course, looking at Google Maps with hindsight, we probably should have cut off a mammoth corner by taking US-231 straight to New Market. I bet there’s plenty of lovely country that way, too.

The restaurant is not far at all from the interstate, in a small, lovably old town called New Market. The sign is unmissable, a gorgeous, gigantic neon contraption erected shortly after the current owner’s parents opened the place in 1957. It’s a classic southern diner, with funny old formica tabletops and a menu full of meat-and-three staples, done right and done well. 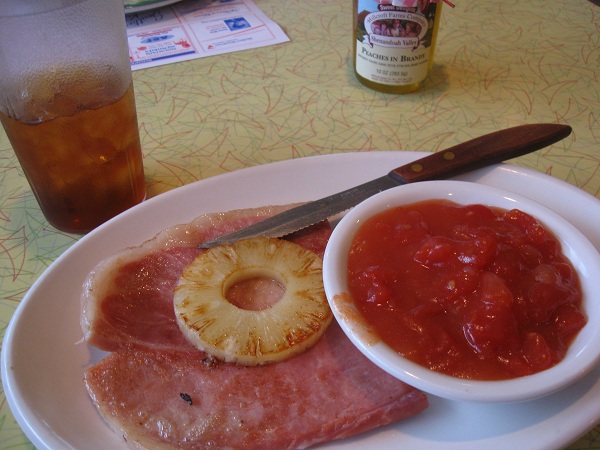 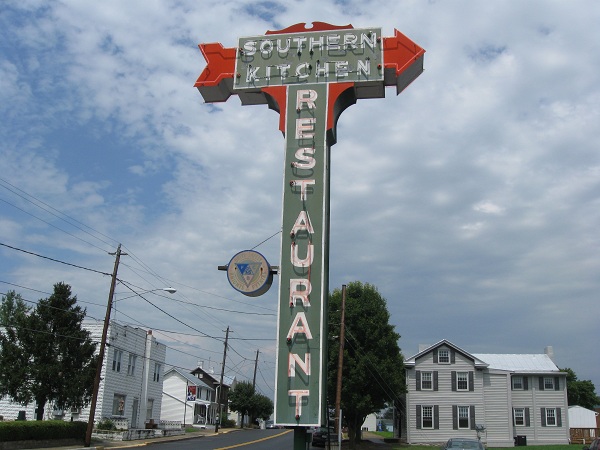 I had country ham, served with a slice of pineapple, and stewed tomatoes, and really liked them both a lot. Marie had fried chicken that was simply out of this world, although she was less taken by the side of corn, which didn’t taste to either of us like it was all that fresh. Still, the chicken more than made up for it. But the real winner here was the bowl of peanut soup that I had before my ham arrived. I had never had this before, and I don’t know that I’ve seen it on a menu since, as it apparently is a specialty local to Virginia. It was thick and creamy and completely wonderful. I would love to have this again one day, and hope that wherever I do find it, it is as good as this was.

Now, while I did remember to order peanut soup from this place based on Edge’s recommendation, I unwittingly let my poor memory bring out the grouchy in our server. I recalled that, as the book was laid out, the page opposite the entry for New Market’s Southern Kitchen talked about the difference between Virginia Brunswick stew and Georgia Brunswick stew, with a local dismissing our take as being more like chili, and at least people in Kentucky have the decency to call their similar concoction burgoo instead of pilfering the name of their thick brew.

Misremembering, I took this to mean that I could try the Virginia style here at Southern Kitchen. I mentioned to our server that I had thought that they served stew, but did not see it on the menu. She told me that they did not. I apologized, and thought that I read somewhere that they did. “Well, you read wrong,” she said, curtly. Turns out she was correct, but I found the sassiness disagreeable. We made sure to compliment all the rest of the food and thank her for an excellent meal.

I would like very much to spend some time in Virginia getting to the bottom of the differences between our supposed styles. I have mentioned before that the thick, gooey stew at Sprayberry’s Barbecue in Newnan is said to be more akin to the Virginia standard, but there are so many other varieties of stew at so many other restaurants that I really would not agree that there’s a consistent Georgia (or Glynn County) style. Whether you’re talking about the chicken and tomato-heavy mix at Harold’s in Atlanta, Speedi-Pig in Fayetteville and Turn Around in Tallapoosa, or the vegetable soup proxy at Vandy’s in Statesboro or the creamed corn base of Zeb’s near Danielsville or any of the dozens in between, there’s a whole book to be written on the many ways that Georgians do it. I wish that I had read a little more closely, and planned to stop somewhere else off I-81 and find the real Virginia thayng.

This wraps up our Honeymoon Flashback series a little earlier than planned! I had intended to tell you next month about the snack that we enjoyed a few hours further down the road at a Tastee-Freez in Chilhowie, Virginia, but it has since closed, as has the place where we had dinner that evening, Fiddlin Pig in Asheville. The following day, we had a light lunch at Asheville’s Soda Fountain at Woolworth Walk, and an early supper at Knoxville’s Pizza Palace, both of which later got chapters of their own when we revisited them.

At any rate, it was certainly fun to look back at the great places that we enjoyed on our honeymoon. It really was a remarkably good road trip, and perhaps one day we’ll get to undertake something similarly huge. For the time being, we are sticking to the southeast, and there’s plenty more good eating to tell you about.