A couple of weeks ago, Marie and I finally got to put some faces to some names and meet a few of our fellow hobbyists. We were invited to join a little gang called the Atlanta Food Bloggers Society – you’ve probably seen the little “plate” icon on the sidebar to your right by now – and the launch party for the group was held at the venerable Buckhead Diner, in conjunction with some new menu items that they have rolled out. Well, there is one face that we knew ahead of time; we’ve known Rebecca Mendelsohn of Atlanta Foodies, who organized this group, for a few months in our “civilian” identities before we realized that we were each bloggers. Also present that afternoon: Amy on Food, Atlanta Restaurant Blog, The Blissful Glutton, Fiddlehead Foraging and The Food and Me. All we needed was for me to pretend to be dead and everybody else could have played an awesome game of How To Host a Murder.

We met at the Diner, which I recall opening with great hoopla in 1987, because its owners, the Buckhead Life Group, wanted a chance to show off some of its new menu offerings from the new executive chef, Charles Schwab. I confess that I felt a moment’s pause about offering a “review” of the goodies that we tried, as just about every chapter that we’ve written here has been written from the perspective of us, anonymously, enjoying, and paying for, a good meal at someplace that we would like to share with our readers. I trust that our readers will understand that on this occasion, we were invited under the purview of a small social media event to greet the chef and representatives of Buckhead Life Group for a complementary presentation of the new concoctions on their menu, specifically to get the word out to our readers. I can’t, therefore, “review” the restaurant, whose sterling reputation has been speaking for itself since I was in high school anyway, as the experience was not at all like what regular diners will experience.

With that in mind, they started us off with some white truffle deviled eggs before giving us some pimento cheese-filled hush puppies that they termed “fritters.” I really lucked out here, as Marie’s nursing-mandated avoidance of dairy meant that I got her fritters. They then brought out “day boats” of ceviche, made from rotating recipes, served with plantain and sweet potato chips. The ceviche that we enjoyed included shrimp, calamari and small scallops. It was followed by a plate of spicy tempura shrimp, and that was followed by a pizza, made with a very thin crust and pesto sauce, then a Cobb salad, pecan-encrusted Maine cod, an entree of turkey jardiniere, and finally a renowned and decadent – I am definitely using that word far too frequently to describe desserts, but I mean it here – white chocolate banana cream pie. 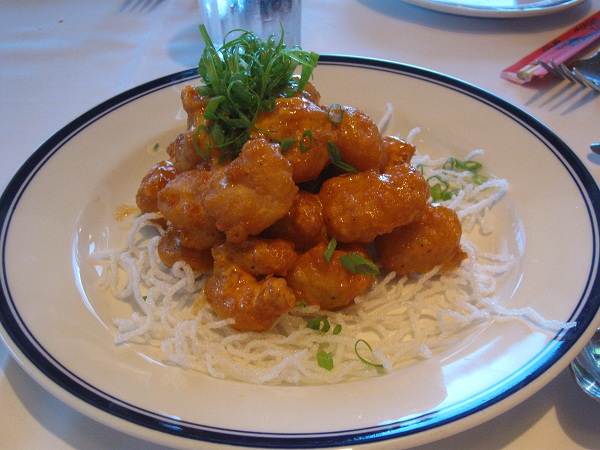 The tempura rock shrimp was my personal favorite of the selections. 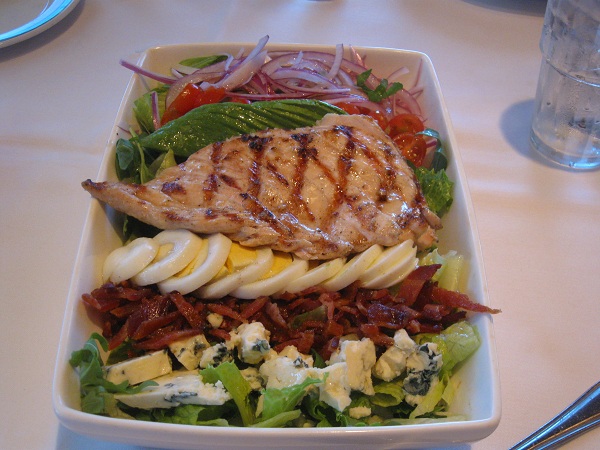 The Cobb salad, however, was possibly the consensus favorite of the group. 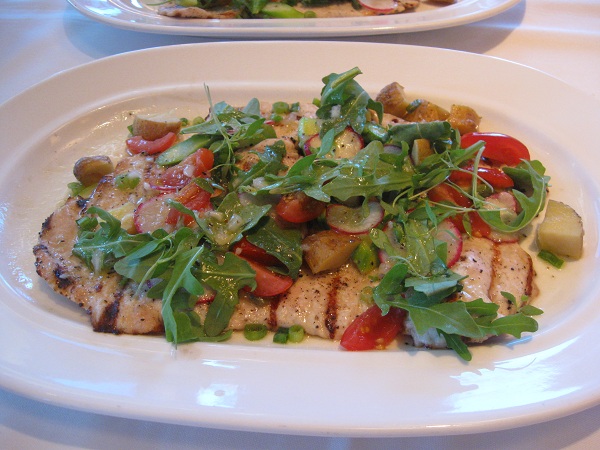 The turkey jardiniere is served underneath a salad of its own, with tomatoes, arugula, radishes and potatoes, with a lemon vinaigrette drizzle.

I’ll tell you honestly, there was not one thing that I disliked. They have put together a splendid menu – it is a pricey one, mind – of some incredibly tasty things, and if they did so knowing that any misstep could be magnified and communicated to readers who might (in my experience) blow things further out of proportion, then so be it. They didn’t make any missteps. Possibly the least interesting thing among the treats they provided was the pizza, but it was still exponentially superior to plenty of other pizzas in town.

I enjoyed the tempura shrimp best, followed by the turkey dish, and then probably the pimento cheese fritters. They really balanced the spice of the shrimp quite perfectly. It had a kick without lingering, but was the most pleasant possible kick. The turkey was utterly unlike the dry meat that I typically dislike. It was moist and juicy and exciting, and served with a splendid complement of veggies that I would never have guessed would go so well with it. These little paper-thin radishes, of all things, just went perfectly with it.

The Cobb salad seemed to be the overall favorite of the table, and I wouldn’t say that anybody was wrong for loving it. This has to have been one of the freshest salads that I’ve ever had; every vegetable tasted like it was picked that morning, with the avocado in particular just electrifyingly vibrant. The blue cheese – apparently Point Reyes blue rather than the Diner’s popular and famous Maytag blue – was probably my favorite thing in it, though. I could have had a heaping spoonful of that cheese.

We thanked our hosts at the Diner for showing off their treats and enjoyed sharing a little shop talk with each other. The Blissful Glutton, whose blog has sadly been a little dormant while she has been working as the editor of Eater Atlanta, has probably been doing this longer than anybody else in town, but she still has a lot of passion for good meals. That’s reassuring; we have all seen some good food blogs dry up and blow away as their writers lose interest. This was a very positive afternoon. We all have blogs that we enjoy reading, and restaurants that we love to visit, and everybody wanted to talk about engaging writers and good places to eat, without dwelling on the bad. I suppose, when a hobby remains as, sensibly, unorganized as ours, there’s really no opportunity for drama unless you just want to be a diva and call other people out for daring to disagree with you about a restaurant. Life’s just better, though, when you’re pleasant.

We touched on the curious alchemy of Urbanspoon rankings, a subject near and dear to my heart, what with so many restaurants that I’ve visited proving so colossally unpopular, unhip and uncool that I’d have to post about two thousand trips to Frankie & Johnny’s to have the same statistical impact as a single visit to Fogo de Chao. On that note, I have tried, without much success, to invite some other writers whose blogs that I enjoy to join Urbanspoon and start enjoying the benefits of the spoonback linking. It brings a good deal more traffic to our blog, and I enjoy seeing how my chief peers and I move up and down the rankings. Of course, many of these sites that I enjoy most – Buster’s BBQ Blog, Chopped Onion, Where’s the Best BBQ? – detail older roadfood and rural places, and not on the more intown trendy joints – like Buckhead Diner – that get you higher up the big city rankings, but it sure would be easier to follow good blogs like them were they in my Urbanspoon news feed.

Leslie, of The Food and Me, hoped that the rest of us might offer suggestions about prompting more comments from her readers. Short of going negative, we were all stumped, noting that pretty much the only time that any of us can reliably expect comments of any sort is when we tick off a restaurant’s owner. Or his sockpuppets. I think that we would all like more interaction with our readers, though. Sometimes, I wonder how Marie and I managed to pick up so darn many of you. Drop us a line once in a while; let us know how we’re doing. All of us!

Other blog posts about Buckhead Diner: