When a restaurant called Fat Boy in Smyrna shuttered at the end of 2006, the city had an outpouring of grief and nostalgia like it had never, ever seen before. A friend of my parents phoned them to say not to bother going down for a farewell milkshake on their last day of business; the line was two hours long.

This was unusual. I grew up in Smyrna. Nobody shed a tear when they knocked down Jonquil Plaza or Belmont Hills. That lunatic shoe store in the former downtown with the windows packed to the ceiling with mismatched shoes like something out of one of Carson McCullers’ bad dreams, nobody lined up for one final chance to go there. But Fat Boy? Oh, that took the wind out of everybody’s sails. Generations ate there. It was in the Campbell district – we’re going back a bit, I’m talking about the district as mapped when I went to school there – but it brought in Wills and Osborne families in equal measure.

For decades, it lay claim to the title of Smyrna’s Oldest Restaurant. (I believe Old South Bar-B-Q has it now.) I never ate there that much; it was a place that locals told you about and steered you right when you suggested getting some chain fast food somewhere. It was about like a pre-conglomerate Dairy Queen, but with superior fast food. It was a brother-in-arms to the dairy bar restaurants that readers may read more about by selecting the category from the sidebar, and, consequently, exactly the sort of restaurant that I loved. When my children were either cheerleading or on the field playing Upward flag football at a nearby church in 2004-05, I liked to get a bite to eat with them here. They served perfectly reliable fast food burgers and dogs, with milkshakes in about two dozen different flavors. I wish that I had been blogging back then, or that the awesome Chopped Onion had made it by, so that more of a record of the business would have been kept.

I mention Fat Boy because some members of the Kipreos family, who ran Fat Boy, opened this second generation place, Come N Get It, about three years later. It is located on Marietta’s Church Street Extension, home to two really notable joints that we have featured here before, Brandi’s World Famous Hot Dogs and The Red-Eyed Mule. This street is only about a mile long and home to three reliable and fun little restaurants. Is it any wonder that, on a day where we don’t feel like trying something new, it’s possible that one of us might be found on this street?

In fact, for lunch two Fridays ago, I just felt like a couple of Brandi’s amazing dogs and chili, and that evening, Marie came home with a sore throat and suggested we get some of the chicken soup at Come N Get It. I recalled that we’d never actually taken the camera that way before, and were doing our readers a disservice by not telling you all about this place. 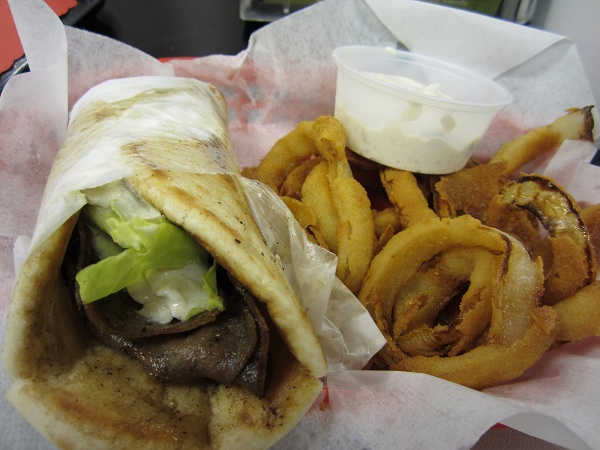 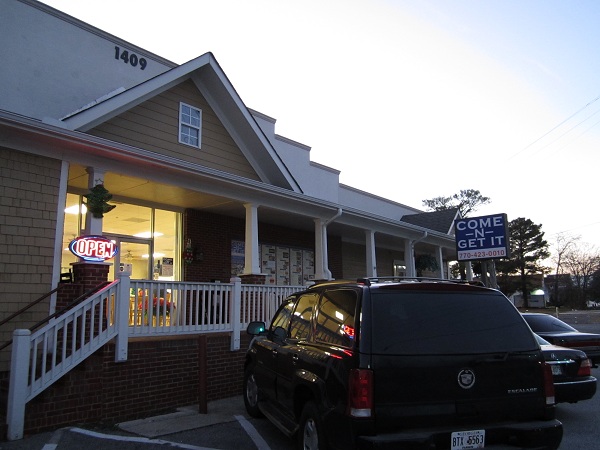 Guests can still enjoy the same sort of burgers and hot dogs on toasted buns that Fat Boy once offered, but the focus here is more like a classic meat-and-two diner with, as seen in many of today’s southern diners, Greek-American influences. In Cobb County, the Marietta Diner gets all of the press, and all of the attention from Food Network’s Guy Fieri, but I’d suggest that the meals are just as good at Come N Get It, and the prices are a lot lower and we’ve never once had to wait for a table.

I’ve eaten a few things here and never found a disappointment. It’s just solid, reliable comfort food. Among their Greek dishes, the gyro is a simple classic, remarkably tasty and I don’t object at all to the heaping, generous ladle of tzatziki sauce. Too many places, you wind up napkining out the excess, but here, it’s quite welcome. The sauce is also a key ingredient in a distinctly non-traditional side called Zorba Fries. One day, some enterprising soul in the Marietta Welcome Center will assemble one of those popular “local dishes that you must try” and must include these. They’re fries, sprinkled with some of the same seasoning used for the Greek potatoes, drowned in tzatziki sauce and feta cheese.

It’s the Thia’s chicken soup that has become Marie’s immediate go-to when her throat hurts, though. It’s a deep, lemony, thick and yellow brew with rice. A great big bowl of that is only four bucks and makes her feel twice as good as she did when she stepped into the place. You can’t say no to that. It’s a good place, with good people, and even if that song of the same name by Badfinger gets running through my head whenever I think of it, I’m glad we have comfort food like this so close.