Meredith Ford’s name is still on the front window of Nuevo Laredo, still barred from entering. Four years ago, the former AJC critic penned a quite mild criticism of the restaurant for the newspaper and war was declared. At the time, only a handful of blogs were active, and this was an early-to-our-hobby example of something that all food writers, bloggers and amateur critics have since come to know: conveying the gentlest of disappointments can be, in the eyes of the faithful (or the owners), a blight upon God’s eye.

Nuevo Laredo opened in 1992 as the sister restaurant of U.S. Bar y Grill. This was, absolutely, my favorite El-This-Los-That place in Atlanta. It was on Howell Mill Road just a little east of I-75, it was always packed and it was always delicious. I did not eat there nearly often enough, although I was there that Saturday in October 1995 when the Braves won the World Series. That was one amazingly happy restaurant. U.S. Bar y Grill closed some time shortly after that, and I honestly had no idea, until Ms. Ford started her controversy, that there was a complementary restaurant that served much of the same food.

Fortunately for my slowing metabolism and generally subpar health, I’ve since lost my taste for El-This-Los-That Tex-Mex restaurants, and rarely feel the desire to gorge on this stuff. But every three or four months, I feel a little peckish for the sticky sauces and melted cheeses, and limitless refills of chips and salsa. Actually, the only thing about Nuevo Laredo that I don’t like is that they do enforce a limit, and charge for the third cup of salsa. This can prove obnoxious if you’re like the couple at the table next to me on the afternoon before Christmas. I nosily observed that they started with two cups of salsa for their chips, as the fellow liked to pour about half a bottle of Cholula sauce in with his red stuff and mix it up. When the young lady finished her cup, the server informed her that another would cost two dollars. The customer was so aggravated that I’m certain that the restaurant lost her repeat business. 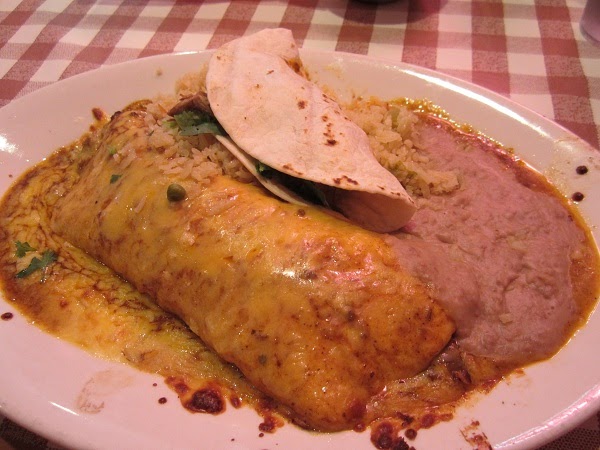 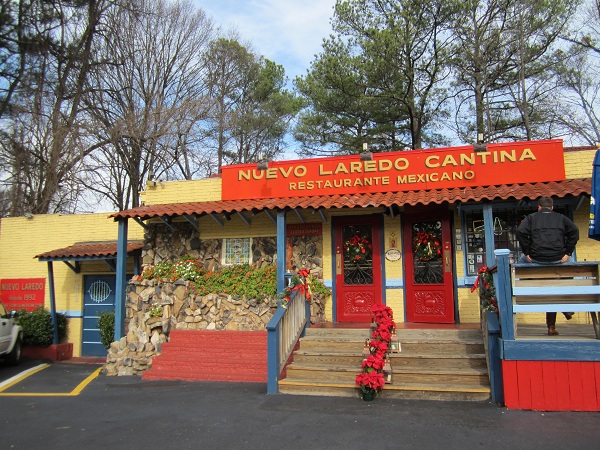 This was only my third trip to the restaurant, and I confess that it was a somewhat down-the-list choice after the other places I was considering were closed for Christmas. I was covering a co-worker’s shift on this Saturday, and since it was only a half-day, I could grab a bite to eat before going home. That is, if I could find a place I wished to try that was open.

As ever, Nuevo Laredo was completely packed and I got one of the last parking places in their overflow lot across the street. The restaurant is located on the trailer park side of Chattahoochee Avenue, in a garish and tacky building that looks like something out of Six Flags. When this place says “traditional,” it means “the traditions of southeastern US takes on Tex-Mex food, as established in the early 1970s by the Monterrey chain.” It is, in point of fact, just another El-This-Los-That place, albeit one that sparks just enough of a notable difference in flavor to bring in giant crowds and cover the walls in “Best of Atlanta” awards. The AJC, Creative Loafing and Atlanta Magazine have all given this joint credit as either readers’ or critics’ favorite many, many times over the last twenty years.

I had an order of cebollitas, which are grilled green onions, heavily salted and served with lime, and one of the lunch combos of a burrito and taco, served with rice and refried beans on a giant, hot plate. I’m rarely in the mood for it, but when I am, I’d like it done right. The prices are a little high here, but the food, for what it is, is just fine, the service is pretty good and, on those occasions that a fellow forgets to bring a book, the discreet people-watching is entertaining. As traditional Mexican dishes are, after all these years, finally becoming a little more common in Atlanta, this place is something of a throwback, but as throwbacks go, it’s the king.

Heck, just writing this has got me thinking about a plate of nachos with dry ground beef, refried beans and gooey white cheese. It has not been three or four months!

Other blog posts about Nuevo Laredo: