As I drove north on US-41, I realized how long it had been since I was on this stretch of road. Honestly, the last time I was anywhere north of McCollum Air Field on Cobb Parkway was a good ten years back, when I was in the insurance industry and I went to see a broker in Cartersville and decided to take the long way home. Since then, apart from once going to a karaoke bar right in front of that air strip in 2005, I had not been this way, and so I did not know what to expect. It turns out that this long stretch of road decided to roll over and make way for the Wal-Mart. It’s just a long, hideous, pedestrian-unfriendly sprawl with every national retailer and restaurant represented in one awful, identical strip mall after another for miles and miles.

At the intersection of 41 and Mars Hill Road, there’s a strip mall with an Auto Zone and a Porter’s Paints, and that’s where Zeigler’s BBQ chose to open. They’ve been quietly doing business here in this small space without much, or indeed any, fuss among the local foodie literati*. I had not heard of it until I finally got to the end of the alphabet on my first pass through cleaning up Urbanspoon Atlanta’s barbecue listings, and, not seeing any press, hoopla or blog posts about them anywhere, I decided to head that direction. Even Barbecue Street, which I wrote about in yesterday’s chapter, has one other blogger mention. This place is completely top secret. 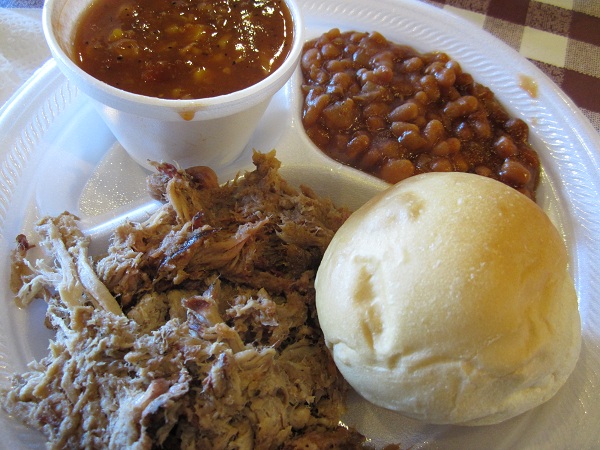 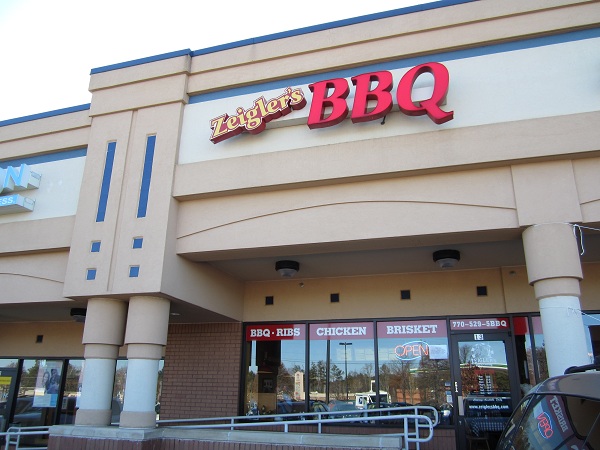 Al and Mary Ann Zeigler set up shop here in 2007 after winning in several barbecue cookoffs and competitions. A couple of years later, aggressively, an outpost of the Tennnessee-based Bar-B-Cutie chain set up shop across the street. The Zeiglers have not seen the upstart off quite yet, but they have a loyal crowd and, based on my experiences with the chain, a better product at a better price.

The pulled pork was pretty good. It was moist, but did not taste very smoky to me. I had it with beans and stew and I was disheartened just a little to pay extra for stew, as I object to that, but it’s hard to object too loudly when they only charge $6.99 for a pulled pork plate in the first place. Even with the upcharge, that price is a good deal lower than quite a few of their suburban competitors. Plus, the stew is very, very good indeed, really nice and peppery, and I enjoyed it more than the pulled pork. It is thin and soupy, with much more tomato character than onion, and just packed with spice and zest.

They have a pair of thick, brown sauces for each table. The house sauce is an apple bourbon, and while I personally didn’t enjoy the taste very much, I have to applaud the Zeiglers for coming up with something quite unique. I don’t recall another sauce like this anywhere in the region, and I really like the way that they stand by this as their basic sauce. Part of me enjoys having lots of variety and choices, but I also feel very strongly that the best restaurants are the ones that do it their way. Particularly with barbecue restaurants, we see many places that try to please everybody by offering a Texas-style sauce, and a couple of North Carolina-style sauces, and a Kansas City, and so on. This can be great if you enjoy sampling, for instance, but it takes pride in your product to just say, boom, this is the sauce. If Atlanta’s ever to develop a nationally-known identity for its barbecue, it’ll take more definitive statements like this from chefs, competitors and restaurants. I like the moxie, but I liked the hot sauce better.

(*Postscript: I don’t know how the heck he’s managed to do it again, but in between my visit to this restaurant and writing it up, and this blog post going up about two weeks later, The Georgia Barbecue Hunt has claimed first dibs on yet another previously-unblogged restaurant. For what it’s worth, he reports that the brisket is amazing.)