Two Saturdays ago, Marie and I enjoyed a Date Day. The teenage girl was off one direction and the baby boy was with my mom, and so we drove up to the Athens area to enjoy some time without the company of younguns. Our first stop was Oglethorpe County, where we went to Shaking Rock Park, one of our favorite places, and enjoyed a nice walk in the woods. I always enjoy the sight of beautiful creatures sunning themselves on the rocks, like these fantastic lizards that I snapped: 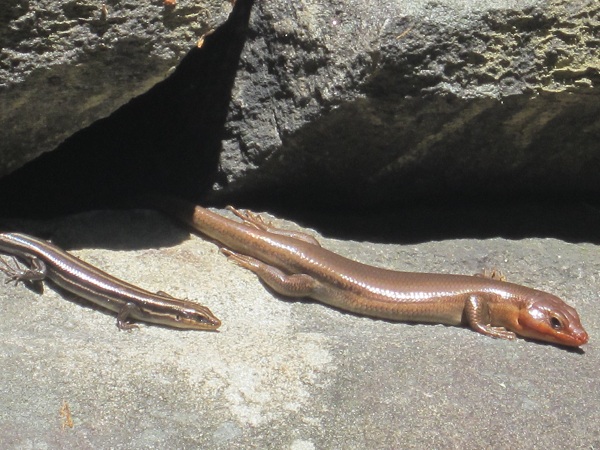 On the way to Lexington, we drove past the always-pleasing sight of a big barbecue trailer, seeing the logo for Pig O’s, from the community of Vanna, on the side. Vanna is a good fifty miles up the road, near Royston. That’s the site of their “home base,” as it were, the food truck ordinances requiring trailers to have one somewhere. This trailer is pretty much established in its own home in Crawford, on the side of US-78 in front of a former house that, for the last several years had been a typical northeast Georgia junk store but, for a time in the mid-1990s, had been a barbecue place called Bunk House. I had stopped here once, having driven past the place dozens of times when eating at Paul’s in Lexington, and quickly determined that I would have been better off just going on to Paul’s instead.

We had some neat serendipity on this trip. Circling Athens, there are three extraordinary barbecue restaurants that I rank among my ten favorites: Paul’s, Hot Thomas, and Zeb’s. Even though we were going to Shaking Rock Park, which is practically across the street from Paul’s, I had decided that I wanted to revisit one of the other two places, tossed a coin and selected Hot Thomas. Well, it turns out that Pig O’s is run by Zeb Dean’s granddaughter Pam Osley and her husband Phil, and they use the Dean family recipe for the chopped pork and that legendary, amazing, pepper-packed hot vinegar sauce. It was almost like getting both in one trip. Marie and I each had a sandwich and she also had a side of stew. Now, this was their own concoction, and not at all like Zeb’s creamed corn base. I thought it was not bad, and Marie enjoyed it more than I did, 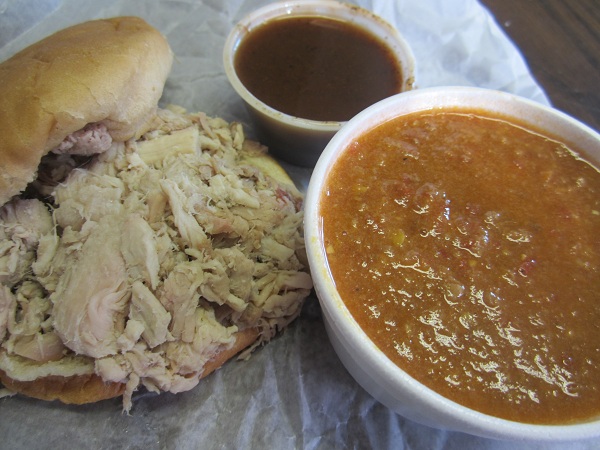 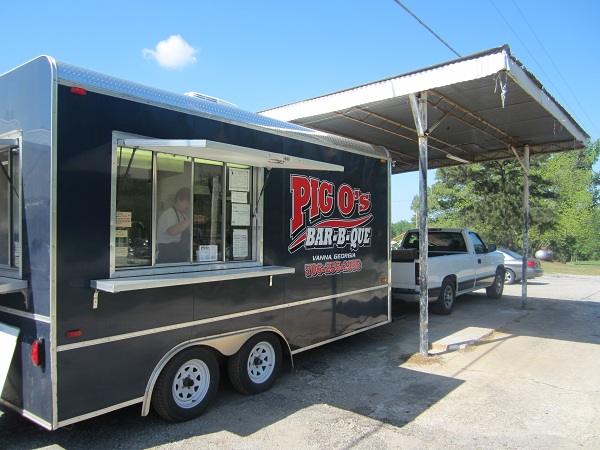 Actually, revisiting our two year-old chapter about Zeb’s, I’m struck by the remarkable comment, toward the end, about how I rarely had barbecue twice in a day. Oh, that’s what life was like before we started blogging.

Anyway, Pig O’s certainly offers a very reasonable facsimile of the Zeb’s taste, but they also offer a very curious sweet sauce. Marie got some on the side for her sandwich, earning a priggish raised eyebrow from me, because, really, what other sauce could possibly be necessary when tasting Zeb’s pork? Expecting a brown, Memphis-styled sweet sauce, we were both surprised by something a little more orange, and a little bit like American-Chinese sweet and sour sauce. It was not bad, but neither was it a patch on the vinegar sauce, honestly.

Pig O’s does their business as carry-out orders, but the old home does have a rickety table and chairs for travelers to use. It was very, very relaxing, but I can’t help but hope that as this business grows, they might consider some site with a nice outdoor patio.

I enjoyed the sandwich, but considered it just an appetizer for the main lunch. We drove back toward Athens, but turned left on a road called Wolfskin, which connects the area to GA-15 south of Watkinsville. Many years back, there had been a barbecue place called David’s on this road. The building is still there, the restaurant long closed. I remember being surprised to have found a restaurant on this road in the first place, miles from anywhere but farms. The road is remarkable for a long stretch where one lane is in Clarke County and the other is in Oconee. I’ve never seen signs like those anywhere else.

The road put us out a little south of Hot Thomas, which, as noted above, is one of my favorite places. Hot sadly passed away last year, but the restaurant is defying my worry that it may not continue without him. With some younger family members and restaurant-logo T-shirted teenagers pitching in, the old place is doing good Saturday afternoon business. The food is as great as ever, and the great collection of old soda cans and bottles, which includes the long-missed, locally-bottled Budwine, still glows in the sunlight. 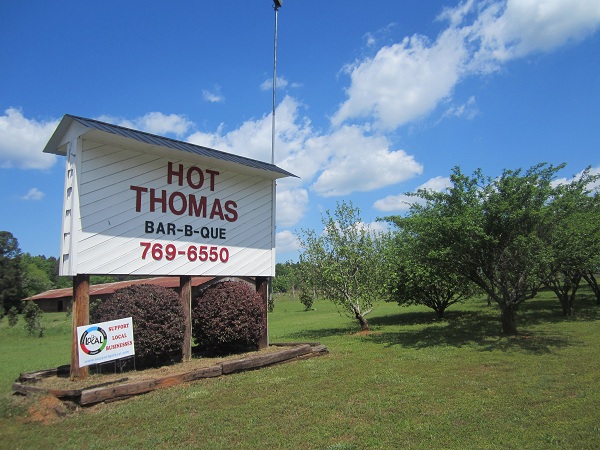 Hot Thomas will always be special with us because, last May, it became the first place where our baby tasted anything other than milk when I gave him a drop of stew on my finger. It was not quite steak on a sword, but it was special to us. Well, once Marie stopped hyperventilating about the baby’s safety, anyway.

I had my usual plate with amazingly good chopped pork, stew and slaw and their extra-hot vinegar sauce. Interestingly, they tell me now that they have a “super hot” sauce available, and that recently, it made a big, boastful fellow tear up and cry, it was so hot. I’ll have to stop by again in a few months and try that, won’t I?

Other blog posts about Hot Thomas: