One should acknowledge compliments, even the backhanded ones. Even the good-natured teasing, really. So it was that, a couple of months ago, our little blog ended up on Tom Maicon’s radar. Now, I freely admit that I do not know the first thing about sushi. I have never objected to it, and I have often enjoyed it a great deal, but I just don’t know what makes it good, or what I have done wrong by admitting that I like Ru San’s, which, in the circles of sushi snobs, is acting like the hillbilly at the fancy table jittering and wobbling before impatiently bellowing “Would ye please pass th’ jelly?” after waiting too long for the Polaner All-Fruit. Well, I don’t know what the issue is, because I used to date this girl who watched more Japanese cartoons than every single one of you, combined, and she liked Ru San’s just fine. Because, as everybody knows, liking Japanese cartoons a lot instantly makes you an expert on every facet of that nation’s culture, and gives you leave to do things like end your questions by saying “ja ne,” of course.

Which is a long, silly way of saying, to Maicon and any other sushi snobs in the city, “mea culpa,” and that you’re absolutely correct, I had no idea whatever what is meant to constitute good sushi. I’d like to know more, and I concede that I know nothing, but there are easily hundreds of bowls of Brunswick stew that I have not eaten in this state, and I prioritize. That said, I resolved that, sooner or later, I would get around to this deficiency and learn a little more about the food that I like, but don’t know why.

Happily, a couple of weeks after I Googled our blog and read Maicon’s teasing, I was invited to come to Sandy Springs and try the new menu at R Rice Wok Grill Sushi, a restaurant that opened in 2010 to no instant success and was revamping with a new chef, Danny Chen. The new menu has been in place for just over a month now, and they asked some local media to check them out. I always enjoy meeting some of my fellow hobbyists, and catching up with acquaintances like Angela from Fiddlehead Foraging, and I really enjoy learning new things. The owner, Gary Lin, was happy to answer some of my admittedly nebulous questions, and I think that I left with a better understanding of what I should be looking for if ever I’m to join the illustrious ranks of the sushi snobs.

This strategy, I think you’ll agree, is probably more sensible than taking a seat at Ru San’s and asking them why everybody hates them so much. Also, I had a terrific lunch. 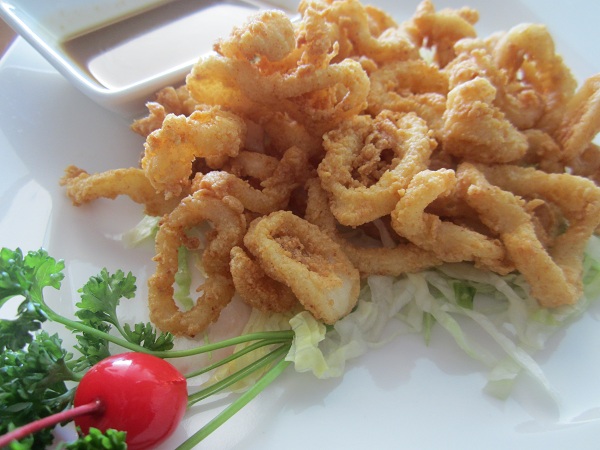 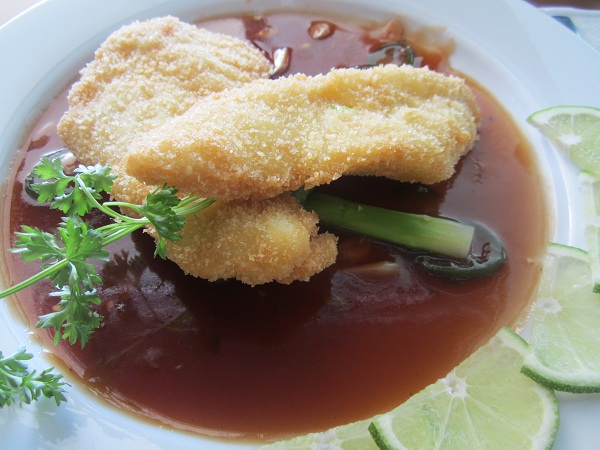 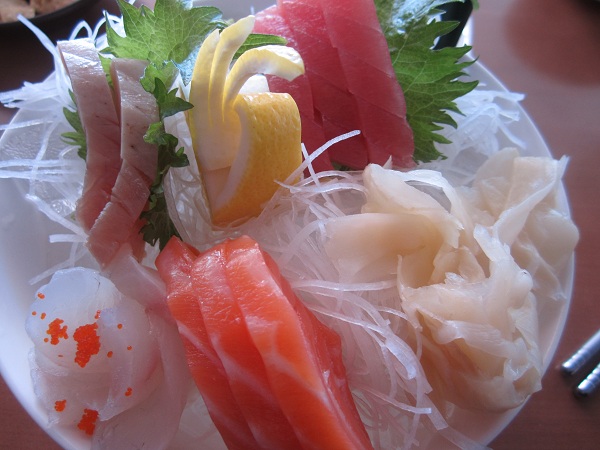 Mr. Lin informed me that the main problem with dollar-menu sushi is that the fish simply isn’t as fresh as it should be, but it’s compounded by the amount of rice in the roll. That’s how high-volume places keep costs down, by hiding inferior quality meat inside far more rice than a good roll should contain. This was illustrated by one of the rolls ordered by Emily of Ultra Epicure. The lava roll features shrimp tempura and mango wrapped delicately, topped with salmon and then given a drizzle of strawberry sauce. I was not prepared for just how well these fruits complemented the taste of the fish. Astonishingly, this excellent treat isn’t even the best seller on the restaurant’s long menu. That would be the volcano roll, which is a California roll topped with crab, scallops and spicy mayo. With the new menu rollout has come a raft of locally-themed specials, including rolls named for the Braves, Hawks and Falcons, and the popular Sandy Springs roll.

But, remembering what Maicon had written about his favorites, I wanted to try sashimi, and so I ordered the lunch plate. Priced at $11.75, it comes with nine pieces in a bowl of ice, along with a ginger salad and rice. The sashimi is typically chef’s choice, although they will accommodate guest’s requests. Since I’m allergic to most shellfish, for instance, much of the menu is kind of dangerous to me. Lin told me that properly-prepared sashimi should melt in your mouth. That was certainly the case with my meal. All of the meat was incredibly tender, and also very flavorful. Understanding that my experiences have been very limited, this was assuredly the best sushi that I have yet enjoyed.

Lin isn’t surprised by my curiosity and enthusiasm. He sees that Atlanta is far behind the curve in what we might term “nouvelle sushi.” Well, if I’m ever to join the ranks of the Sushi Snob Society, I may as well learn to talk like one. Lin says that most of the Japanese restaurants in town with legs and popularity have older Japanese chefs who’ve been insulated from new developments in the cuisine that diners in New York and Boston have been playing with. Lin casually mentioned bizarre phrases like “chicken sushi” and “pizza sushi,” leaving us to imagine what the heck those are, before continuing. Here, our Southern suburban lifestyle, where most sushi is consumed buffet-style, doesn’t leave much room for chefs to experiment, or, really, much interest from diners, who perceive sushi as either “California rolls” or “that other stuff.” 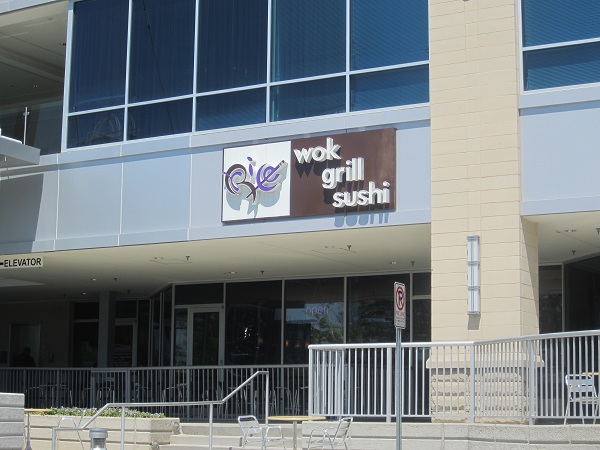 There is more to this restaurant than just sushi and sashimi, however. I admit that none of us in our group were truly taken with the avocado tempura appetizer, finding it soft and lacking the satisfying crunch that we expect with tempura, but the salt and pepper calamari was just a fantastic little dish. This was cooked absolutely perfectly, with the meat not at all tough or too chewy, and seasoned just right. Various salads were also praised, including a neat seaweed salad, and a really interesting sashimi avocado salad, made with diced tuna, salmon and yellowtail. As for my simple house salad with ginger dressing – heck, I probably violated some snob code by having lettuce, didn’t I? – I found it pretty good, and was pleased that the dressing was house-made, and not that standard orange goop that too many places in town get from the food service catalog, but it was also thinner than I was expecting, and ended up tasting more watery than anybody wants with a salad.

R Rice Wok Grill Sushi is located across Peachtree-Dunwoody from the Publix, in the same building as Piedmont Hospital’s Heart Center, and a Rising Roll, a Gigi’s Cupcakes and a Figo. Parking can be a huge headache during the lunch rush, when all the workers from the Hammond Drive office parks fill the large lot. I certainly recommend you visit, but either for an early or a later lunch. I think that you’ll find that the staffers are all prepared to answer questions and get even the least informed of us on the right track.

Goodness, many more meals like this and I’ll end up reacting to a suggestion of Ru San’s like a notion we should have barbecue at a Sonny’s or something.

Other blog posts about R Rice: