Well, there’s no getting around this: Marie and I tend to eat inexpensively. We don’t set out to, but I figured out a long time ago that the meals that I genuinely enjoy the most can be had for under $9 or so. These would be the out-of-the-way barbecue joints and roadfood places that don’t have master chefs competing on, or judging, game shows on The Food Network. This is one place where Marie and I don’t completely agree, though we’re mostly in sync 99% of the time. A couple of weeks ago, she was remembering a very good meal that we enjoyed several months previously at The Sound Table in Atlanta, and suggested that we visit some place with that kind of experience. Since we’d spent the late morning enjoying barbecue miles and miles out of town, and the afternoon snacking at simple college favorites in downtown Athens, I had to agree that getting something a little different would be in order.

So, after a short stop at Tyche’s Games on Lumpkin for Marie to see whether they had any new Munchkin expansions that she needed, or dice in some color she has not previously seen, we stopped into Top Chef judge Hugh Acheson’s first restaurant, Five & Ten, to see whether we could get a table. We couldn’t – Saturday evenings here really do require a reservation – but they could seat us at the bar. Astonishingly, we sat with a fellow who went to high school with our State Farm insurance agent. He told us a tale about playing a piano concert at the old state mental hospital in Milledgeville forty-some years ago, and did some warming up in an anteroom with one of the patients, a man who was wearing a fetching black cocktail dress and imitation pearls. I’d ask what are the odds, but it’s Athens, and always odd.

Marie ordered one of the evening’s specials, cod served in a kohlrabi puree with their greens, fingerling potato chips with – get this – homemade molasses vinegar and a light, white butter sauce. This was remarkably good, although the portion was quite a good deal smaller than either of us, lulled into a false sense of security by the mammoth servings at places like Marietta Fish Market, were expecting. 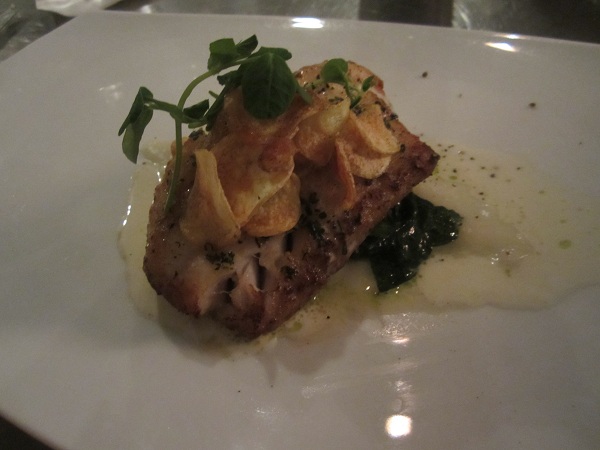 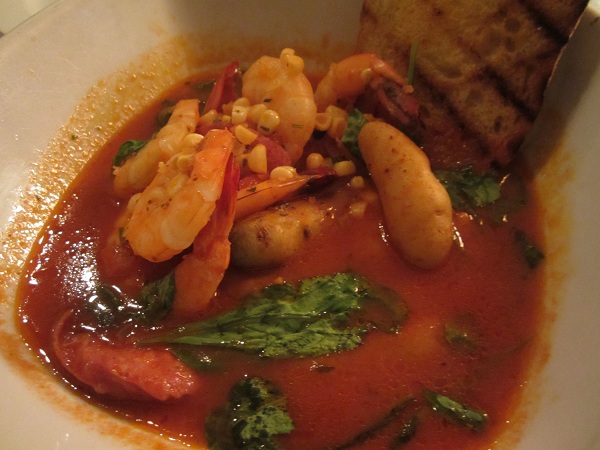 While Marie went with a special, I tried one of Five & Ten’s signature dishes – it’s even on a T-shirt – the low-country Frogmore stew. You can read the recipe for this little treat of shrimp, andouille sausage, potatoes and corn and perhaps you’ll do the same little air-punching that I did when I read it. I just knew that I tasted Old Bay seasoning in this, and I was right. It is very good, although I bet it is even better on a cold day in January or February. 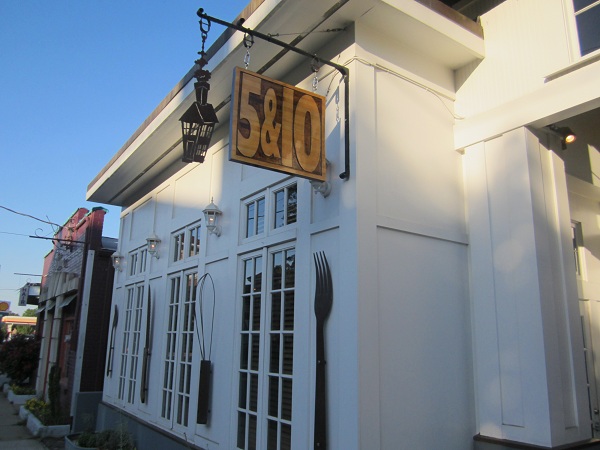 A recent article in Food & Wine, which appeared as part of the promotion of Acheson’s cookbook A Turn in the New South, describes Acheson’s take on Southern cooking as “neo-retro.” The uncredited piece notes, “Though Acheson is very much rooted in Georgia now, he is not a native Southerner. Born and raised in Ottawa, he did most of his training at old-guard French restaurants north of the border and at Mecca and Gary Danko in San Francisco. He followed his wife to Athens and became a convert to every element of the Southern lifestyle… A voracious reader of old Southern cookbooks, he works deeply researched dishes into the menus of all of his restaurants… ‘I have virtually no interest in molecular gastronomy,’ he says. ‘But I do have an interest in showing the difference between how people fried chicken 20 years ago and how they do it now.’ ” Acheson has turned this interest into something very memorable. The restaurant, which occupied the building that I remember best as the home of The Lighthouse, has been thriving for twelve years now, drawing huge crowds and very justifiable praise. It’s definitely worth a visit to see what Acheson is neo-retroing up in the kitchen.

Yes, this was a more expensive meal than Marie and I typically enjoy. In point of fact, we spent more here than we did at every other place that we visited that day, combined. But the novelty of the experience, combined with the fun atmosphere, great bartender, and the incredibly flavorful food all added up to a memorable evening. I would definitely enjoy returning to Five & Ten sometime and trying out other things on their menu. We may even try one of Acheson’s other places as well.

Other blog posts about Five & Ten:

One thought on “Five and Ten, Athens GA”