I had bigger plans for this trip to Athens than would see the light of day. I was going to spend all darn afternoon in town, and take a really nice springtime walk at the Botanical Gardens, and visit four places for the blog, and have a couple of beers at Trappeze. Then I had that first meal, recounted in the previous chapter, and, my stomach laden with more grease than I can remember having anywhere, ever, I began scaling back plans massively. There wasn’t going to be any beer, for starters. The thought of drinking anything other than water made my stomach hurt more. I made the decision to be a little more explicit about the effect it had on my system in this separate chapter, because it wasn’t that first restaurant’s fault that I put more food in my gut sixty minutes later.

I drove down 441 and took a right at Newton Bridge, and followed that into Athens. This puts you out on Prince, not far from Pulaski Street. Take a left down this old residential street, narrow enough before the locals took over a lane with street parking, and you’ll come to the old Leathers Building. This was once a factory, now repurposed as shops and a restaurant or two. Chuck Ramsey, the former executive chef at Athens’ Five & Ten, opened Pulaski Heights BBQ late last year. It has been getting rave reviews, but I’ll tell you, friends, that first greasepit meal left me in no state to enjoy the work here. 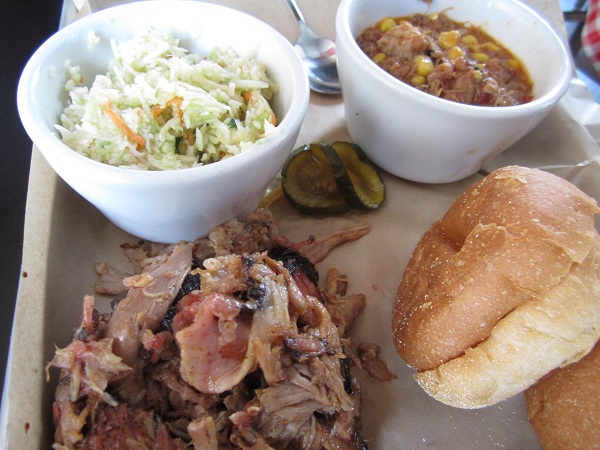 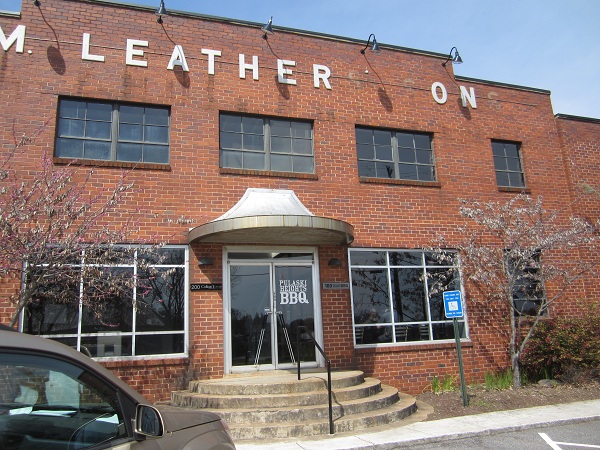 Over the years that we have been blogging and sampling more meals in a day, I think that I’ve become quite good at juggling portion sizes, spacing out small meals, getting some exercise, and doing enough things to ensure that I’m not going overboard on calories or overeating in a day. This strategy does not prepare me, however, for disasters like the morning’s, where just half a sandwich’s worth of meat contained as much grease as it had. Seriously, a small bowl of stew and half the meat from a sandwich and I wanted to sleep for a day. An hour later, when the poor girl at Pulaski Heights put that $11 tray of food in front of me, and I saw even more grease and juice streaming away from the pulled pork, I wanted to cry. If I’d gone to Bill’s, or Fresh Air, or Hot Thomas, each of whom serve the more traditionally dry chopped pork seen in this region’s barbecue, this would not have happened.

Now that I’ve frightened you, let me walk that back. Had I not ruined the day with that first meal, this probably would have been perfectly acceptable. Perhaps fortune wasn’t on my side, and the barbecue that Pulaski Heights served me was a little fattier than it usually is, but it was really not excessive, just unpleasantly surprising under the circumstances. Unlike the previous meal, this meat had a very nice and smoky flavor, and had been given an interesting bath of rubs and spices. It was juicy enough that, especially considering the situation, the spicy vinegar sauce was completely unnecessary. The sweet tomato sauce was really wonderful, and, since I typically prefer vinegar sauces to tomato sauces, I was curiously pleased to find that I enjoyed the sample of that a little more, but, again, my meal simply didn’t need any more juices or sauces or anything like that.

For all that Cabin Creek had previously done wrong with their greasy pork, their stew had been completely amazing. Pulaski Heights’ version did not compare, did not come close. There was too much corn in it, and it simply didn’t have the lasting flavor of the Cabin Creek’s stew. On the other hand, the vinegar lime slaw was really good. Given another opportunity to visit, I would be totally willing to come here on an empty stomach to give Ramsey another chance and try the pulled pork and slaw again, and sample a different additional side. It would be worth another trip just to have some of those wonderful house-made pickles.

But after the earlier meal, just the small amounts of fat and grease of this trip was like a heavyweight punch to my gut. I already knew going in that there would be no beer this day. Nor would there be any crepes, milkshakes, or long walks, either. At this point, all I wanted to do was go somewhere and sit for a while and let my system recover for a few hours, have a last snack and limp home. Uggh.

Other blog posts about Pulaski Heights: