A couple of months ago, Marie and the children and I went to the Atlanta Food Truck Park for a lunch experience that everybody else enjoyed more than I did. For those of you who missed that earlier chapter, my main objection is that I don’t like the unpredictable nature of food trucks. Either you go to the set place where they’re known to congregate, roll the dice and hope that the one you wants shows up, or you decide what you want and track down the truck, following it to where it’s parked. The reliability of “brick and mortar” storefronts – that’s so twentieth century! – seems lost on fans of the mobile food movement.

Having said that, I’m not disputing the quality of the really good food that can be served up from some of them, nor the fantastic independent spirit of their owners and operators, nor the reality that the lower overhead might lead to more experimentation in recipes and examples of really great meals that might not find a home in a larger store space. There are, in fact, several food trucks I’ve heard about that I would like to try, and, with a Friday afternoon free a couple of weeks ago, I decided to look at the Atlanta Food Truck Park’s website to see whether any of them – Mighty Meatball, the Blaxican, the Fry Guy, Banged Up and Mashed – would be parked there. Since Banged Up was listed on the schedule, I made my way over there in the awful, blistering heat to give the park another try.

Before I forget, it was a much, much nicer experience coming to this place on a Friday than on a Saturday, mainly because the trucks are not jostling for space amid a “farmer’s market” full of people hawking doggie biscuits and organic shampoo. It seemed like there were many more choices and far more hungry guests happily chowing down than on the Saturday that we visited. 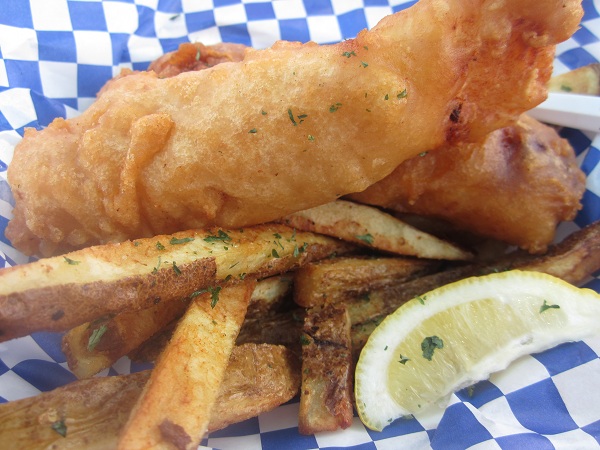 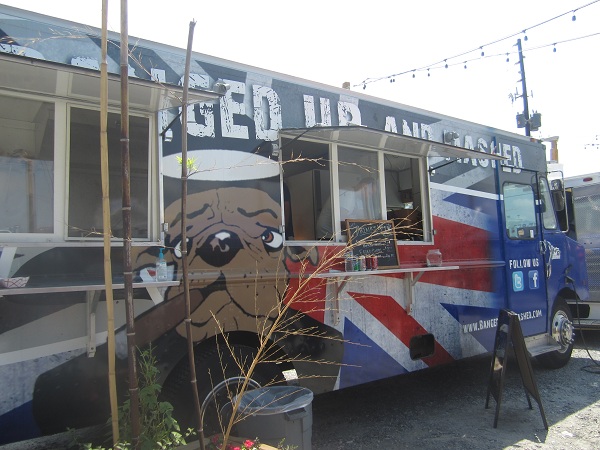 So the Banged Up and Mashed truck started rolling in January of this year and is frequently seen in the evenings outside of Churchill’s Pub off Johnson Ferry in East Cobb. This is apparently meant to replicate the English city experience of leaving a pub late in the evening and sobering up a little by clogging your arteries with fry grease before taking the last bus home. That image was doing fine until I made the laughable suggestion that anybody in vehicle-mad suburban East Cobb would willingly take a bus anywhere, wasn’t it? Well, anyway, the truck, which is out to do something about the “grossly underappreciated” views we have of British cuisine, has a good and growing reputation for providing really wonderful and greasy English late night staples like fish and chips and chicken tikka masala and I was looking forward to trying it out.

I just had the fish and chips and thought it was a really good lunch, but probably would be even better either indoors somewhere, with air conditioning, or after the sun went down. The cod – and it is cod, and not some ugly thing from the Mekong Delta, meaning this truck is instantly preferable to certain seafood restaurants of our recent acquaintance – is fried just right, in a flavorful, seasoned batter. The fries are hand-cut daily, and while the meal is about as unhealthy as a lunch can be, good heavens, does it ever taste good.

I don’t know why the city of Atlanta hasn’t rolled out the red carpet to have food trucks lining Centennial Olympic Park, where it would be more convenient for me to find them without driving somewhere, and take lunch back someplace comfortable, with air conditioning! Until then, the awful summer heat of the park on Howell Mill will have to do, but it’s unlikely that I’ll be going back out there until it cools off. When it does, apart from the three other trucks mentioned above that I’d like to try, I’ve found a fourth! Last week, I was talking about the tamales in Chattanooga that I missed out on. Turns out there’s a tamale truck in town as well. Darned if I wasn’t totally satisfied and full of greasy cod and fries when that other truck actually registered with me. I hope to see that again in the fall!