Once upon a time, I ate at California Pizza Kitchen quite frequently. I used to meet a friend for lunch at the Dunwoody location every month or so, and really enjoyed their bruschetta and their barbecue chicken pizza. The chain claims the credit for this particular concoction, which many other pizza places have adapted over the course of the last couple of decades.

The story goes that in 1985, a pair of attorneys, Larry Flax and Rick Rosenfield, started the restaurant, and carefully designed a big, open kitchen around the central wood-burning stove, only to have their original chef up and quit on them after a month. They hired a man named Ed LaDou, a former student of Wolfgang Puck, to replace him, and he rolled out a new menu almost immediately, the barbecue chicken creation something he just threw together on the spot, furiously assembling various mix-and-match ideas and sending them to the oven to see what would develop.

CPK has grown into a reliable chain with stores in 33 states and ten other countries, about 300 locations in all, and has a successful line of surprisingly quite decent frozen pies for home baking. When we were invited to come to their Atlantic Station store on 19th Street, I was anticipating sharing some pizzas with our fellow bloggers, but they threw us a curve ball. Their “New Adventures” menu doesn’t have any pizza on it. In fact, they quietly removed some of the slower-selling pies to make room for their new entrees.

I was glad to see that they picked Atlanta for a launch party, because people in this town just do not talk about CPK. I did my little research, such as it is, to find some credible, readable mentions about the restaurant for that little list at the bottom of the chapter, and as far as I can make out, the only person in the region to type anything worth reading whatever about them prior to last month is Marilyn of Atlanta Etc. I was also glad to see that they picked the Atlantic Station store for the party, because while I like the idea of Atlantic Station, and really love the open and breezy feel of it, Marie and I never really have a reason to come down to this mixed-use development. 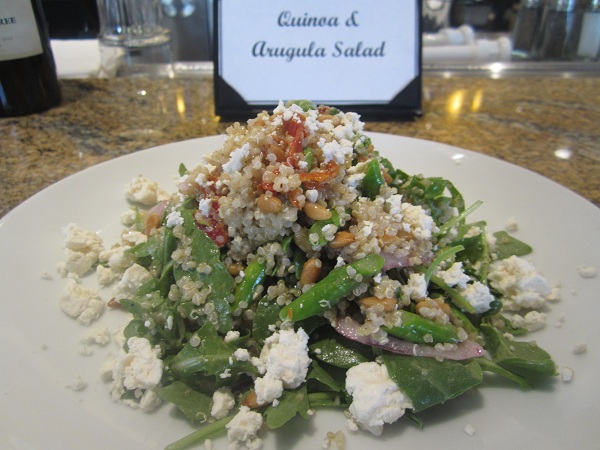 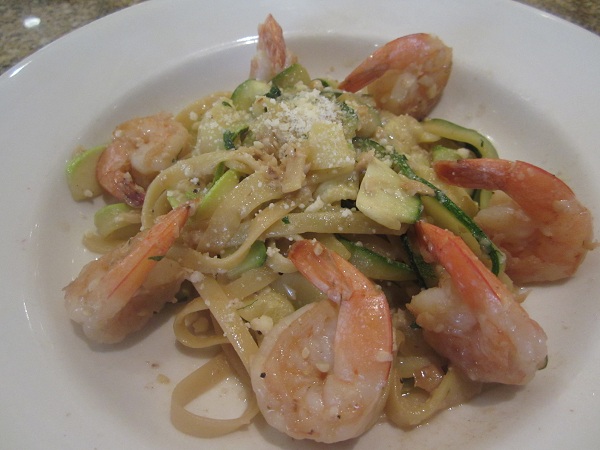 Marie wasn’t able to join me, so I popped up after work, and joined the small group, including Malika from Atlanta Restaurant Blog and Tami Reed, who is, impressively, everywhere. I enjoyed meeting Tara from Saucy Mouth and Rhoda from Southern Hospitality Blog, and encourage you all to visit them.

And you should also visit CPK, because the least of these dishes was still quite good, and the best were sublime. This “New Adventures” menu offers a half-dozen entrees under 750 calories, and I am seriously impressed with how flavorful and effective these are. There’s a quinoa salad made with arugula, red onion, sun-dried tomatoes, asparagus, and toasted pine nuts, and a 600-calorie salmon dish that’s quite curious. It’s roasted in the pizza oven on a little plank of cedar wood, soaking up some of that taste, and served with a tasty corn succotash. I was also pleased with a shrimp scampi entree that, while properly buttery, was also quite pleasantly light.

They all went well with a glass of Dreaming Tree Crush (North Coast, 2010). I had never heard of this wine before, but it’s co-owned by musician Dave Matthews and Sonoma wine veteran Steve Reeder. I’m willing to forgive a lot for a good glass of wine, but this really tested me. Was it good enough to forgive every commercial radio station in America playing “Crash Into Me” twice every dang hour throughout 1997? Well, maybe. 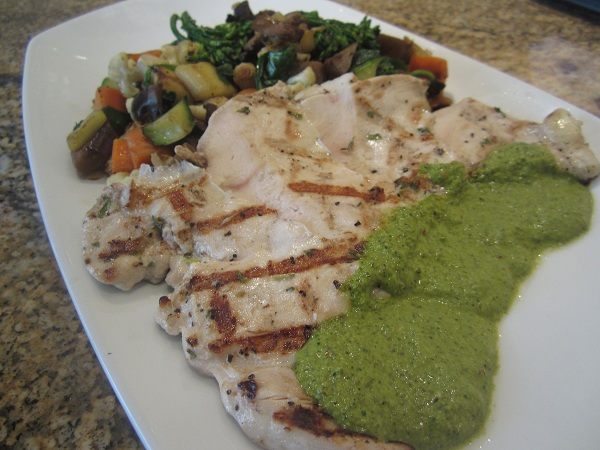 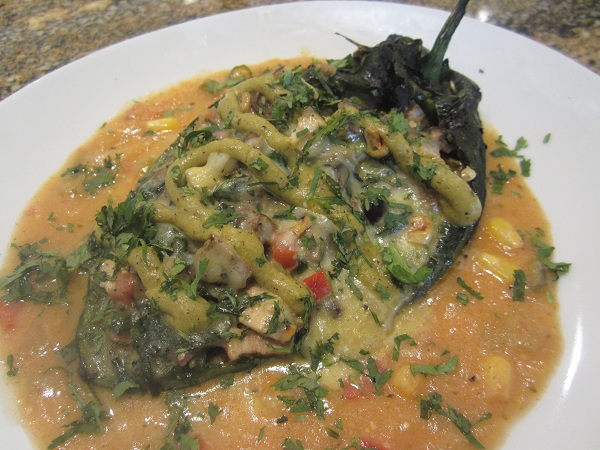 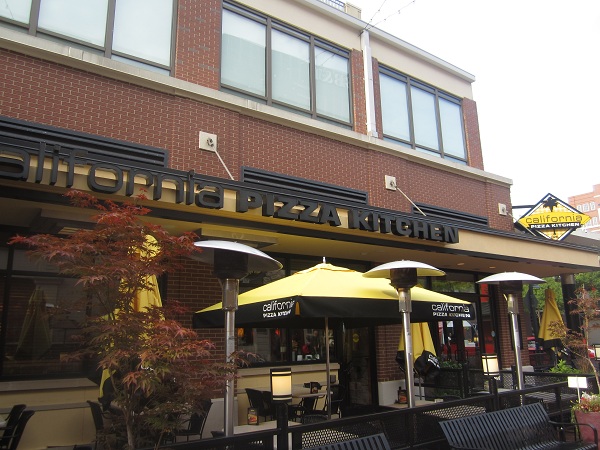 But, anyway, my favorite two dishes were the chile relleno and the grilled chicken chimichurri. Both of these were just flat-out exceptional. As the photo above demonstrates, the chile relleno was not at all like your common deep-fried version as found on the menu of so many El-This-Los-That joints, but a big and wonderful poblano served in a thick orange sauce that really complemented the flavor so much. And the chicken was served with a stunning, spicy green sauce made with cilantro, parsley, red wine vinegar, and a lot of garlic. I loved them both completely.

I’m curious whether this new lineup will be very successful, since the chain has such a solid reputation for its pizza. I think that they will have to work hard to persuade guests who have come in for a pizza to give some of these a try. I mean, I’ve never once gone out for a pizza and put down the menu deciding that I’d rather have salmon instead. It seems like a risky strategy, but guests who are willing to chance it will certainly leave impressed. CPK has six stores in the Atlanta area; I’d recommend you give ’em a try!

Update, 11/15/12: Desiring to taste one of those chile rellenos again, I visited the CPK in Marietta, which is on Johnson Ferry near 120. So there, I suppose that it is possible to go to one of these stores with something other than pizza in mind. It was, again, very good. 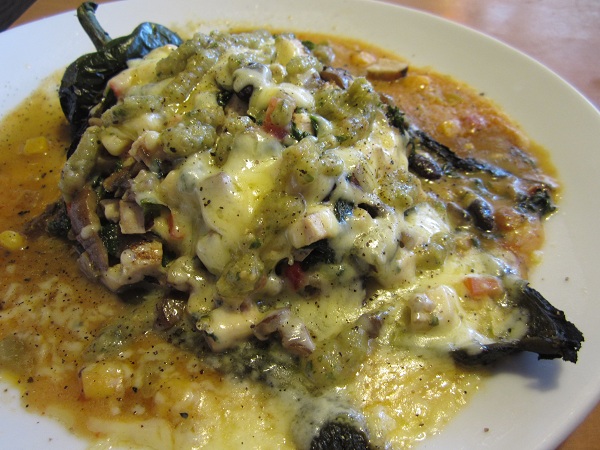 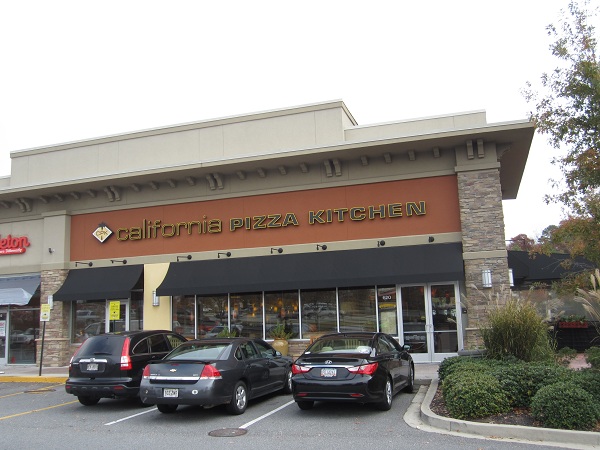