Among the disadvantages faced by being a suburbanite with kids and a day job is that certain events are often a real pain in the rear to manage. Monday evening sports events downtown, Monday evening concerts downtown, even Monday evening barbecue suppers downtown are just very difficult to schedule when you’re always on a clock of some kind and live so far away. Maybe it wouldn’t have been such a burden to make it down to P’cheen in the Old Fourth Ward if I didn’t work just about seven minutes away anyhow, but there’s only so many times in one day that I want to deal with I-75, you know?

And so P’cheen stayed out of arm’s reach despite the praise awarded to its Monday evening menu. On Monday nights, Mike LaSage got to take over and serve up Bone Lick BBQ to some considerable acclaim. For years, people have been saying that Bone Lick should be its own joint, and the place finally opened last month. I made it over for a Friday lunch the first week they were open. They found a nice space on Huff Road underneath a quite new condo development, and they are smoking some excellent meat here. 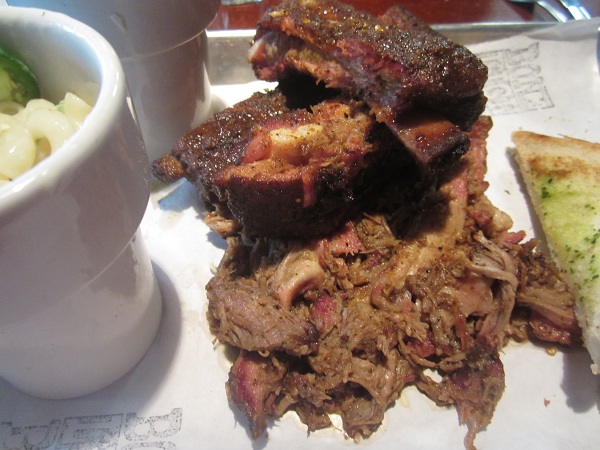 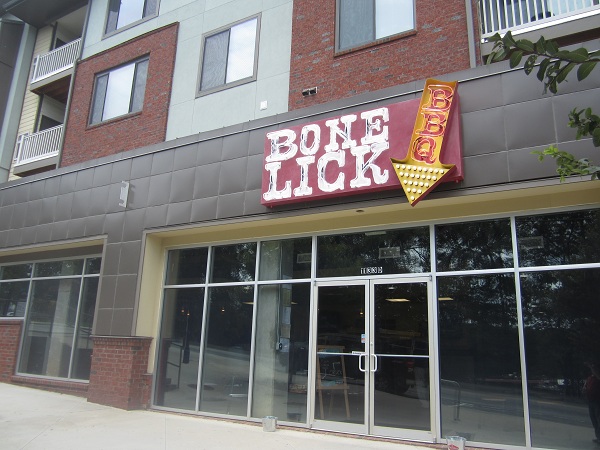 Perhaps even more than being a barbecue snob, I have become, since starting this blog, something of a design snob. I’m not being judgmental when I suggest this – I hope – but I think that when you design a place to look as deliberately eccentric and silly as this, you’d better have some high quality food to back it up. The author M.C. Beaton once described a place as “one of those restaurants where all energy and effort had gone into the writing of the menu and little into the cooking,” and nobody wants that. At Bone Lick, they have a skee ball machine, and a big, portable roadside sign, and dancing pigs in the jukebox, and they have a big, ice-filled bathtub behind the counter for their beer. Basically, if you get that silly, and your food is no good, then it’s going to look like you’re drawing attention away from the food, in a desperate bid to at least give people something fun to talk about. It’s very subtle, but there is a psychology to interior design. Do you complement, or do you distract?

Fortunately, this food is very, very good, allowing the affectations to complement the food and make the entire experience pleasant, relaxing and fun. This is just a super place to come with friends, although I bet that it gets really noisy. The late lunchtime crowd was pretty big – there has, after all, been a lot of noise about its opening among the restaurant / retail news blogs – and I joined a line that stretched to the door.

The prices are certainly on the high end here, as is perhaps to be expected for its location and pedigree. My two meat combo plate – pork and ribs with two sides – came to about $15, but they give you a heaping pile of food and I certainly left completely stuffed. (I must apologize again for my very poor photography, and certainly should have adjusted the ribs and placed a fork in the frame to give readers a better perspective on how much food that is in the shot above. It’s three ribs over a very healthy pile of pulled pork.) I was not wild about the jalapeno mac and cheese. I certainly didn’t object to it, but the two sliced peppers didn’t really give the cup of noodles much of a kick. The Brunswick stew – for our out-of-town readers, this is yet another Atlanta place that charges extra for the privilege – is completely delicious and rich.

The pulled pork and the ribs were simply divine, and while the servers wouldn’t be drawn into telling me what was in the spice mix, there’s definitely something neat going on to make this as spicy as it was. The pork is smoky and has a memorable kick even before guests sauce it up. They had four sauces, all served in identical red “ketchup” squeeze bottles with a two-letter code scrawled in sharpie. There’s a typical Georgia-style red tomato-vinegar blend, a little thicker than what you find in the northeastern corner of the state, a North Carolina-style with more vinegar and red peppers, a South Carolina mustard, and a brown Kansas City sweet sauce. I could not settle on a favorite. None blew me away, but all were pretty good.