Fritti, a very good pizza place in Inman Park, was the first place that Marie or I ever tried a Neopolitan-style pizza. We’ve had better since – Vingenzo’s, Varasano’s – and we’ve had some exceptionally good pies that I don’t enjoy quite as much as these – Double Zero, Antico – but I will always have a soft spot for this place, since that initial experience with this style was so good.

This was the first restaurant in Georgia to pass muster with, and earn accreditation from, the Associazione Verace Pizza Napoletana, a society of well-meaning snobs who try and make sure that anybody passing their pies off as Neopolitan does it on their terms, with a proper wood-burning oven, the right flour and tomatoes, acceptable toppings and the like. The cheek of such a thing tickles me, really. I am having trouble envisioning any other type of food that would generate such an organization, or how such a thing qualifies as a selling point. Well, there was that one guy who once told me that Roy’s Cheesesteaks are not proper Philly cheesesteaks, as Roy is from Cherry Hill, which is merely a suburb of Philadelphia. I imagine that sort of bean counter would find equivalent brethren among the ranks of the AVPN.

The restaurant is one of several in town owned by Riccardo Ullio, who brought Enrico Liberato from Italy to do the baking back in 2000. Liberato later moved on to Antico, and then, last year, to Fuoco di Napoli, and then, this spring, there was some legal unpleasantness and while I’m not certain whether Liberato is residing in the United States currently, to say much more would be to invite certain parties to start commenting about kidnapped children, pot, and knife fights. I love restaurant gossip more than just about anybody, but more along the lines of weird old fast food mascots and vegetarians who own barbecue restaurants, and not so much of the felonies and the libel side of things. Basically, Fritti was the launching site for what would become a very colorful story in Atlanta cuisine. 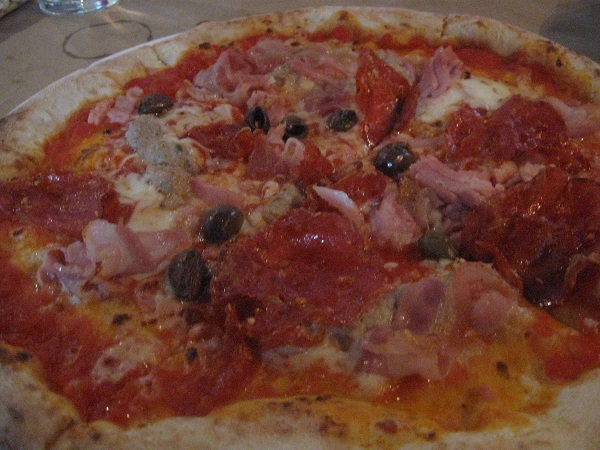 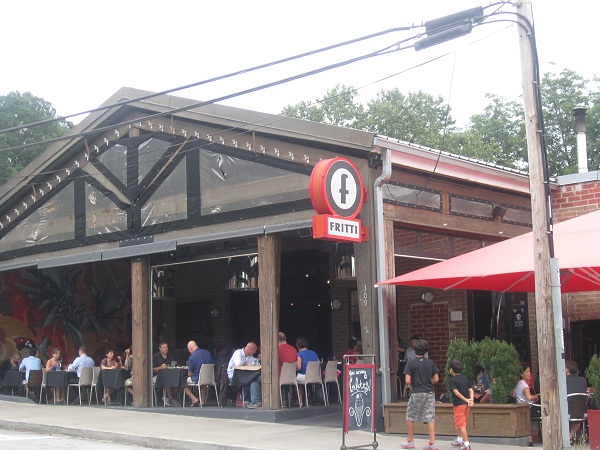 Typically, Marie and I will at least try to make it to a couple of new places on a Saturday, most of which will be mentioned in chapters here, but three weeks ago – yes, we’re behind again – we ended up enjoying Barkers Red Hots for lunch, and then she took our teenager to Lakewood to see the Jason Mraz concert, so I stayed in and listened to very loud music. We didn’t want it to be a weekend completely spoiled of new-to-the-blog food experiences, so on Sunday, the family picked me up downtown at work and we went over to Fritti instead of enjoying our usual big Sunday meal at home that Marie prepares.

We shared two pizzas between us, the Quattro Formaggi, which was really more like five, since a gentleman comes to your table to shave some mozzerella freshly onto your pie, and I kept him going until he about sliced his thumb off, and something that my daughter ordered and which was piled high with various meats. Perhaps it was the Maialona? They were completely wonderful, not at all greasy and the crust had just the right crispiness. The cheeses had just a hint of saltiness, not overpowering, and everything was so flavorful and delicious.

We passed on getting dessert here, as we often do, because I had my fingers crossed that we might find the Orleagian Snowballs truck open, and we did. Parked in a gas station lot at the corner of Ponce and Moreland, this has been here for about six years, but I did not notice it until I read the short writeup at My Little Foodies earlier in the week. Snowballs are chiseled ice topped with sweeteners and flavored syrups, and taste even better when they’re shaved over a scoop of Blue Bell vanilla. 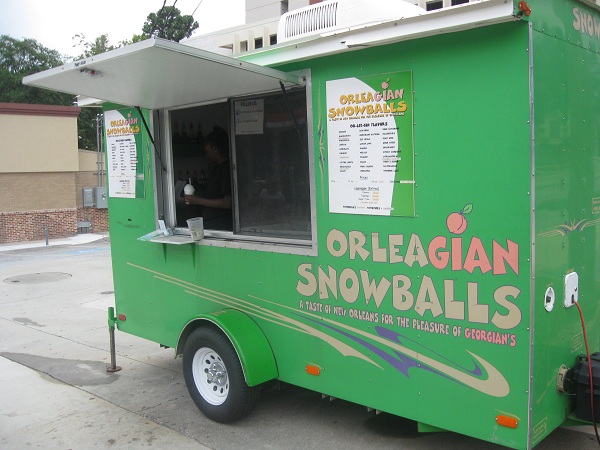 Kenneth Woodfin started the little business six years ago, after he’d relocated to Atlanta in the wake of Hurricane Katrina. Marie had an orange snowball and our daughter had a Wedding Cake – vanilla and almond – but I had a dreamsicle flavor over vanilla and, in a stunning reversal of our standing fortune, it was Marie who conceded a case of menu envy, that ours were tastier than hers. She was not wrong; mine was really quite remarkably delicious, but I was tempted to go back and try banana syrup over ice cream the next time. This came about a week later, on the way home from lunch in Little Five Points, and knock me over with a feather, but that banana snowball was completely delicious. I’m going to have to conspire to try more lunches in that area, and eat my weight in these.

Other blog posts about Fritti: