This is Marie, doing a follow-up article about Sweet Tomatoes. If you recall Grant’s article from a while back praising their tomato soup, he alluded to how sad it was that a restaurant with Tomato in the name, who in fact have a tomato soup recipe that is better than most of their other soups, only has it once or twice a year – March is the month it appears regularly, but we’ve noticed that there is also an occasional week when it will show up outside that schedule.

I have wondered whether it’s a supply issue related to the tomato supply, except that March isn’t known for fresh tomatoes. They need to be using either produce from the other hemisphere or canned tomatoes, and they do put all over their marketing that only fresh ingredients are used. There is tomato paste in the recipe, though, so it seems pretty silly to restrict this one when other popular soups are available year-round. Of course, there was some grumbling in the comments about things like calling a soup with cream in it vegetarian, and someone hated the tomato paste, but overall there are enough Google results on the Sweet Tomatoes soup that I know we’re not alone in wishing it was on the menu more often. I went to the extent of calling their customer service number and got a very polite agent who was unable to comment on menu choices for any restaurant, but promptly offered to take my information for management to reply. We received a form letter thanking us for the comment, and reminding us what we already know, that the creamy tomato soup is available every March. 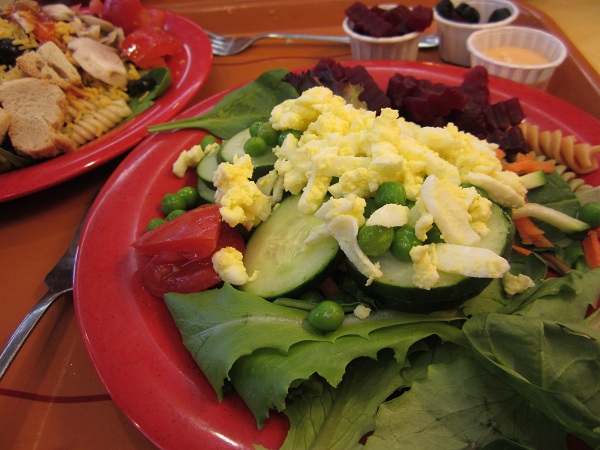 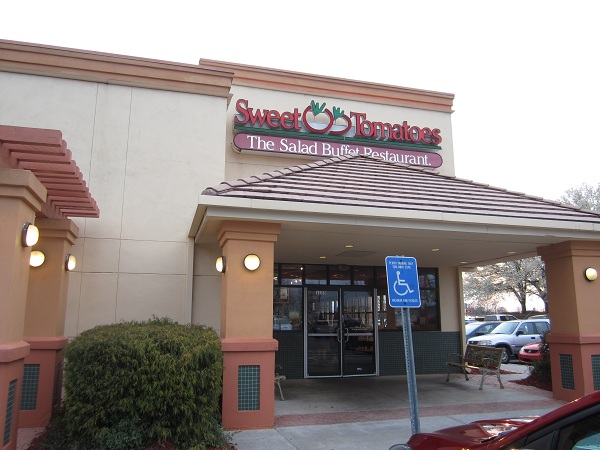 We have gone to Sweet Tomatoes for years, although lately only in March, and it seems there is a child-specific reason for every visit to be a memorable one. On one occasion, the older boy made eating 3 tiny pieces of beet into a half-hour ordeal that included gagging on a particle of vegetable the size of a grain of rice. On the most recent, the baby decided that the Easter party at his daycare had just been just too much for his poor tummy to take…but he waited until we had all sat down and taken our first bite before making this announcement. I should have known there was something wrong when the baby rejected an offered beet, because unlike his brother he loves them. Ah, well…at least I still got to eat four muffins this trip.

On a prior visit this year, there was a woman there who kept apologizing to us for a cough she had that was really quite loud. She needn’t have worried. After all, if kids make noise other people have to put up with at restaurants who are we to complain about equally involuntary noises? Anyway, we’d chosen the table near her because the place was a bit full and we wanted a table rather than a booth, because the high chair just works better with a table. Not her fault; wish she hadn’t felt the need to apologize to our table whenever she passed.

Anyway, aside from the creamy tomato soup there are a couple of other things I could eat by the bucketful – the blueberry muffins (of course, they are other people’s favorite too) and the cheese bread, when they are hot and fresh. I admit to noting the progress on the displays and timing my soup refill forays for when I think they’ll be reloading the trays.

Other blog posts about Sweet Tomatoes: