From the outside, Pier 213 looks exactly like the same suburban fried fish joints that we all learned long ago to drive right past. That’s exactly what I did last month when I first saw the place, and then I got home and realized that I was wrong to judge it.

See, it was a Tuesday morning last month, and I fulfilled a promise that I had made to Marie many months previously. We had been interviewed for Seth Riesler’s Find Dining podcast, and our host asked Marie where she wanted me to take her for her birthday. She said Douceur de France, where we had not been in ages. In fact, I hadn’t been at all since they moved to their present location on South Marietta Parkway; Marie has been known to leave for work early every once in a while and swing by for pastries. So, that morning, we took a few hours’ personal time from our jobs and stopped by for a quiet breakfast. I saw Pier 213 as we passed. This road is not quite as choked with big, identical chains as it once was, but it still looks like ugly, suburban sprawl, and, frankly, the last place I’d expect to find fresh Gulf seafood anywhere.

Later that evening, I finally had a chance to get caught up on all the food hobby blogs that I read, and saw that just a couple of days previously, Bella Vivere had been out this way for what turned out to be a terrific meal with a promising background. I mean, lots of places advertise that they serve fresh seafood, but Pier 213’s owners, Kevin and Kammie Sakprasit, actually own a company called Irvington Seafood in Mobile, and can back that claim. 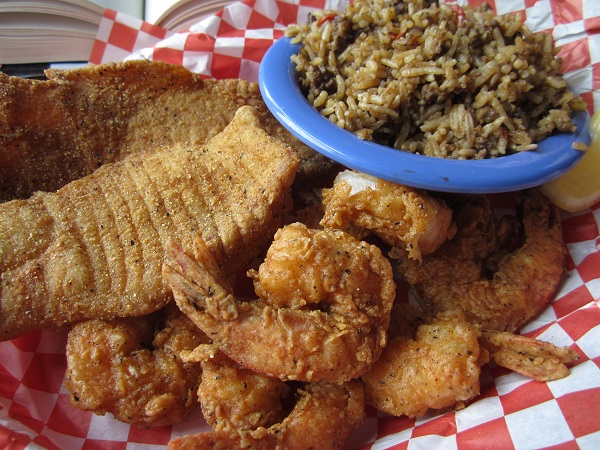 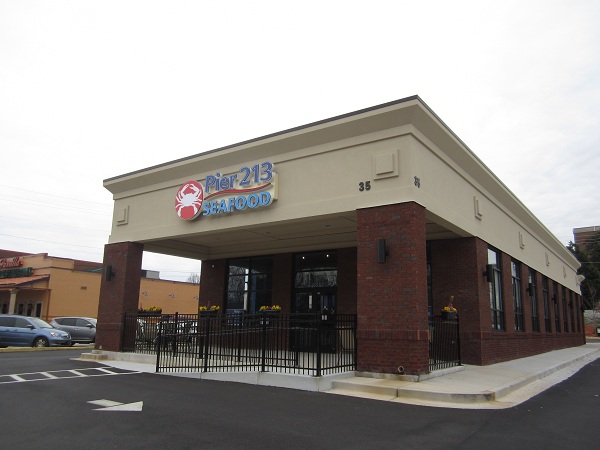 I am very glad that Sandy visited this place and wrote up a report that corrected my misconceptions, because I came back over here for lunch a few days later and enjoyed the best seafood meal that I have had in months. I had the combo plate with tilapia and shrimp with some hushpuppies and dirty rice. Everything was very flavorful and was cooked just perfectly. I loved the seasoning and the mild, spicy tang to the dirty rice, and loved the falling-apart breading to the shrimp. I don’t want to pack this too full of hyperbole, but if there’s better, fresher-tasting shrimp available in the Atlanta area, somebody needs to tell me about it. This was delicious, and, dare I say it, I enjoyed the food here even more than at the vaunted Crawfish Shack.

I was also very pleased with the service. This is a counter operation like the fast food place that may have inhabited the building before it – actually, now that I think about it, mightn’t it have been that Golden-This-Happy-That place? Maple Garden? – and since this restaurant is still so new – it opened in February – the servers at the registers are assisting a lot of people who are unfamiliar with the menu and the daily specials. They haven’t had time to really get “regulars” yet, which can be a big problem come the lunch rush. When I first arrived, not many other people were here yet, but as noon approached, the lobby filled with people, their curiosity possibly sparked by the AJC’s recent review, and the staff did a great job managing the chaos.

This place is a terrific destination for a quick and casual lunch. It is a few steps further away than the restaurants that are actually on the square, and there are indeed some good ones using that convenient real estate, but if you’re in Marietta on business, this is certainly worth considering. The only bum note at all to my meal was that I decided to learn the hard way that Sriracha sauce goes well with lots of things, but not hush puppies. No. Can’t blame anybody but myself for that, though.