One thing’s certain about us food blog hobbyists: we’re an insular crowd. Oh, we don’t intend to be, but I think that, hobby-wide, there’s a sense of checking out what everybody else is doing and where everybody else is eating, and when somebody comes up from under the radar, it’s a big surprise. Westside Pizzeria is just about the most pleasant surprise that anybody’s stumbled across.

Now, I don’t agree with this assessment, but Antico is probably the consensus choice among blog writers for Atlanta’s best pizza. I think that it’s very good, but not transcendent. And while everybody and her brother who maintains a blog was looking for a new angle on how to write about Antico, the AJC’s Bo Emerson wrote up a little human interest piece about two friends who have been eating at every pizza joint in the metro area. Their pick for Atlanta’s very best pie was a place near the water works on a scary stretch of Marietta Street called Westside, which, as near as I can determine, not one of us high-falutin’ bloggers had ever visited. Friday Date Night beat a hasty trail to see what the fuss was about and enjoyed their visit. Can’t say as many other people have followed. After all, these two guys didn’t even put Antico in their top five, so what do they know? Why, these guys don’t even keep up a blog so the rest of us showboats can see what they’re talking about!

I hope that the sarcasm there is evident. They know every bit as much as me. Heck, I’ve not eaten at 99 pizza places in Atlanta, so they probably know more than I do. And Antico’s not in my top five, either. Now that I think about it, these guys might be onto something.

They were right. Almost. I prefer one or two other places, but Westside really is dadgummed fabulous. 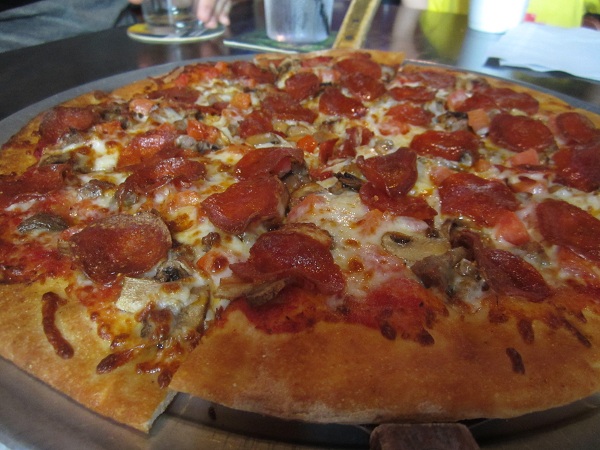 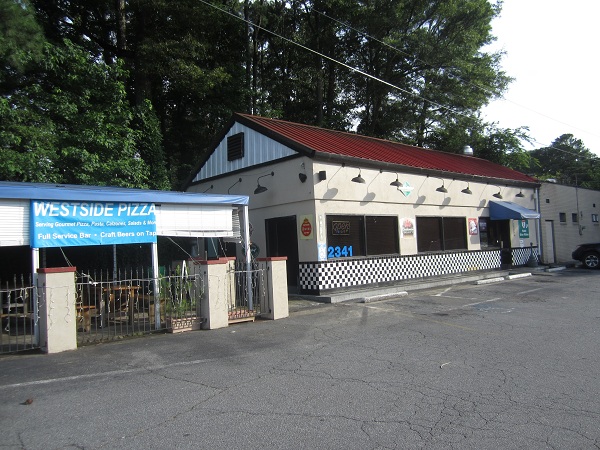 The intersections of Marietta, Bolton, and Moores Mill Road have looked like the end of the world for more than fifteen years. There is a developer who wants to flatten the dead strip mall called Moores Mill Center, home today to only a single Family Dollar, and turn it into a bright and shiny plaza anchored by a Publix grocery store, but it has not happened yet. Despite all of the really nice residential neighborhoods along Moores Mill, and the improvements along Bolton, where Hottie Hawg’s is located, everything has been on hold while the councils and the courts hammer out an agreeable tax increment / allocation “TAD” that everybody can live with. Until then, the place looks not unlike Smyrna’s Belmont Hills did in the last months before it was bulldozed.

Across the street, Westside Pizzeria is quietly doing great business. Ryan Ferrara opened the place in 2004, and the sign at the street calls it “Westside Bar-Café Italiano,” as though Ferrara doesn’t want to be found. Earlier in the week, I’d been exchanging emails with Emily from Spatialdrift and we settled on this place for a Friday night meetup. She and Adam got here a little before us. Marie and I crossed fingers that the baby would be wonderful this evening, and he was, just as polite and well-mannered as a baby can be. (This time!) Getting a small order of fries for him probably helped.

To be honest, we were enjoying such fun conversation about geek stuff that it didn’t even occur to me until the pizzas were nearly finished to pause and ask whether anybody else was loving this pizza as much as I was. We ordered a pair of 14-inch pizzas, a Sicilian (pepperoni, Italian sausage, garlic, mushrooms and Roma tomatoes) and their Chicken Pesto, and they were both completely terrific. These are simple thin-crust pies, but the dough and the sauce are just, in a no-frills and unassuming way, incredibly satisfying. This is just a truly perfect neighborhood spot for pizza and beer and excellent service. They don’t do anything fancy or weird and the experience doesn’t require any extra research or explanation; they just do what they set out to do very well, with fresh, perfectly seasoned ingredients. We left incredibly pleased with the visit. (You can also read Spatialdrift’s report of the meal as well.)

Speaking of beer, we talked about my long-delayed notion that one of these days, I need to do a better job on this blog of discussing beer. I don’t drink very often, of course, but all, ummm, four times this calendar year that I’ve had a beer with lunch or dinner, it has been a Bell’s. This time, I had their IPA, which is called Two-Hearted Ale, and it was very smooth and mild and just a little fruity. Part of me thinks that Bell’s deserves a proper chapter and lengthier discussion sometime. But then again, so do Terrapin, and Monday Night, and Red Hare. Hmmm, decisions, decisions.