This is Marie, with an article about a French restaurant where we enjoyed a spontaneous meal a few weeks ago. The four of us went out on Saturday evening intending to hang out with some buddies, but as they were unavoidably detained and the place selected would have been the second pizza joint in two days, we looked around at the places close to where we were when plans changed. Thank goodness for Urbanspoon’s mobile ap. We allowed the baby to keep one of the six golf balls he had found in the grass at a park in Chamblee (nothing delights a toddler as much as a ball of any kind), and went to Au Rendez-vous Cafe Bistro instead. One recommendation – if you have two cars, take the smaller one. Parking is not spacious.

Naturally we knew absolutely nothing of the place before our visit. I was tempted to get rabbit, as that is something I haven’t had before, but decided on cassoulet based on the number of times the dish had been mentioned in old novels set in France I’d read. Grant chose Coq saute aux champignons. The girlchild chose a crepe, which disappeared so fast I will have to rely on faith that it existed at all. She also attempted to feed her leftover mushrooms to the baby, but he was atypically wiggly and wasn’t having any of that. He’d been magnificent the night before, in a noisy, overstimulating pizza / pub joint, but in this quiet restaurant all he wanted to do was comment very loudly on the neighborhood cat that he’d seen outside while we were coming in (it would graciously allow him to pat it later) and make repeated attempts to pour his drink onto himself. Uncovered cups are still a challenge to him. We got there a little early, so the noisy baby was, thankfully, not a hindrance to very many other people’s dining experience. The tables did fill up as we were finishing.

I saw fried ravioli on the children’s menu and had to pick that for him – anything that is not hot dogs or chicken fingers simply must be encouraged! Sadly they were served piping hot and by the time they cooled off, the baby had filled up on his side of broccoli and bites off other plates and did little more than nibble at them. I didn’t mind and ate most of them myself, so part of the cassoulet needed to be taken home as leftovers. The portions are reasonable here, so you are unlikely to need a take-home plate unless you spoil your appetite on someone else’s food as I did. 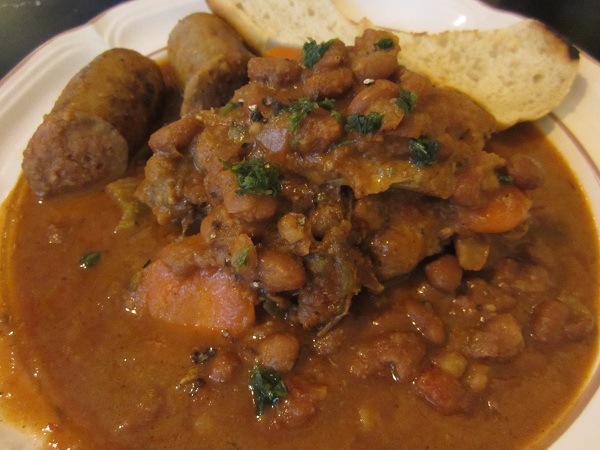 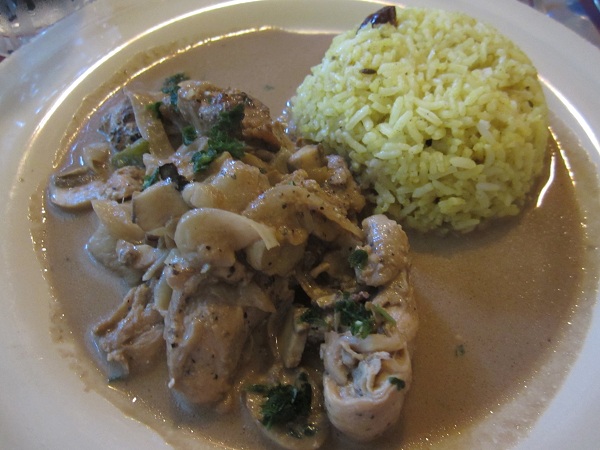 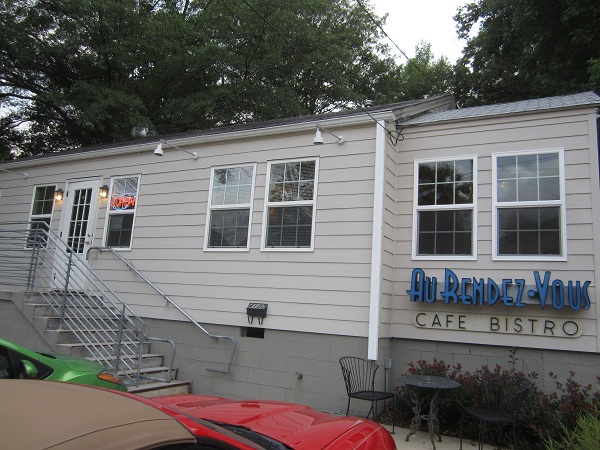 My meal was excellent and very meaty. I could actually have used a few more beans to balance the richness of the meat – duck confit, pork, and sausage. The pork was as tender as chicken, the duck could have almost been eaten with a spoon, and the sausage was just peppery enough to stand up to its company. Grant was similarly pleased with his chicken, and did not have menu envy this time. We were both best pleased by our own selections. This is not a fancy French restaurant. I could very easily see this food on a wooden plank table in chipped china, and it would have tasted just as good. Service was not quick, as has been mentioned on some other reviews, but we were not in a hurry.

This appears to be a second location for this restaurant, with the last place mentioned by a few people who transitioned to the new one. This one is placed in a repurposed house in an older neighborhood. There is a patio outside which last year would have been delightful, but this year is considerably more humid than last, so squadrons of mosquitoes are prohibiting any outside dining anywhere in the city.

Note: some previous online reviews noted that they don’t accept plastic. That is no longer true.