While I’m not certain quite how many barbecue restaurants in the Atlanta region are left to try, we’ve been to 53 of them since we started, and only have another five or six on the radar. Most of those that remain have already been visited by Andy of Burgers, Barbecue and Everything Else, a very good blog that covers out-of-the-way and small places like we do, although his travel radius is much larger. So I dropped Andy a line and asked whether he’d like to meet up at some place that neither of us had yet visited. We batted some ideas back and forth, and I remembered that Dustin, who writes the (sadly) mostly dormant Georgia Barbecue Hunt, had found a new place in Marietta called Righteous ‘Que at the end of July.

Marie and the baby and I met up with Andy and his wife on Righteous ‘Que’s 21st day in business. Patrick Verzone has been operating a catering business for some time, and, now in partnership with Toby Sellers, they have opened in a small storefront in the Publix shopping center at Piedmont and GA-120. I’m pretty sure that over the last nine years, the only four businesses to remain in operation all this time are in fact just Publix, the Wild Birds garden shop, the salon, and Great Escape Comics & Games. Since I’ve been here many, many times to either buy comics or play Heroclix – boy, I’m glad I got outta that money sink, but I had lots of fun – I have watched innumerable enterprises fumble in this strip mall. Then again, I’ve never once seen a line out the door at any of them quite like what we saw on this Friday evening. That’s a great sign.

Most of Righteous ‘Que’s business is carry-out at this stage. Their storefront is a little too small for groups, with seating for maybe fourteen people, but the restaurant is perfectly located for Friday Night Lights tailgating at Sprayberry, Wheeler, or Walton High Schools. In fact, we had dropped the girlchild at Sprayberry for their season opener, hosting Wheeler, who whipped us 41 to 14. At the table next to us, a fellow named Bryant Wright who runs a ministry called “Right from the Heart,” was grabbing a quick meal with several friends in Wildcats garb.

This is our first season being really aware of high school sports. Have to say, I kind of like it. The girlchild’s not got the most spirit in the world, but heck, neither did I at her age. She’ll do fine. 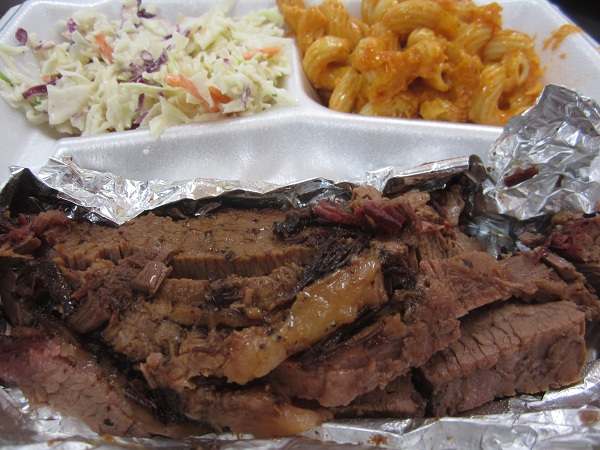 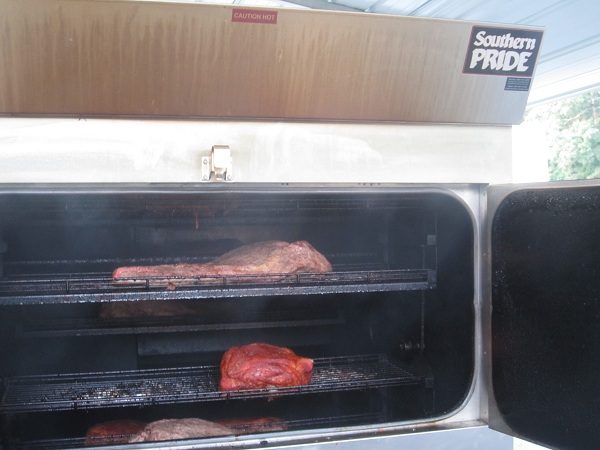 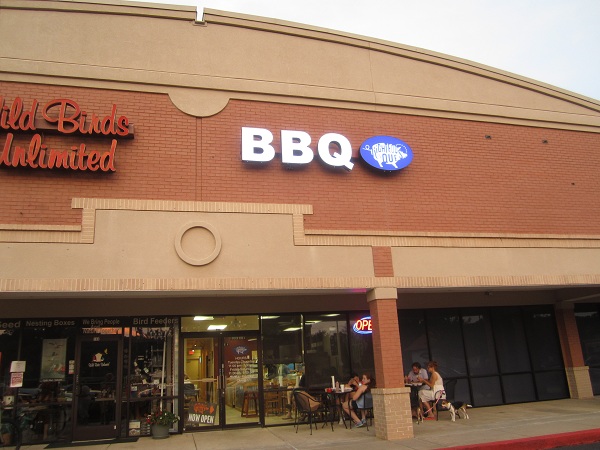 Righteous ‘Que is set up Texas meat-market style, with several different meats, including (to my mind) some pretty good ribs, very good pulled pork, and downright excellent brisket prepared to order and weighed. Standing in line, it was impossible not to start licking my lips in anticipation as I watched these guys’ preparation style. After one order of brisket is sliced and put into a guest’s tray, the leftover meat and juice is all wrapped tight again, with nothing at all discarded until the very end.

I mentioned Dustin above for two reasons: first to note that he brought the existence of a new barbecue place in Marietta to my attention, and secondly because he asked a perfectly reasonable question on Twitter last month: why don’t more places pull their pork to order? Now, sure, if your style, like many in middle Georgia, is to cook the pork in the sauce, you’ve got to pull in advance and keep it in a tight steam tray and hope for the best, but there’s a lot to be said for this style as well. Patrick and Toby are doing it right. They smoke over oak and cherry in a Southern Pride smoker behind the shopping center under a car port and keep their vegetables in steam trays, not the meat. They also have just one sauce, a thin and red tomato-vinegar mix that has a little zing, and it’s not bad at all.

Sides range from some pretty ordinary green beans to some really terrific mac and cheese, and while the price of a meat and two sides is on the higher end for the area, they provide an enormous amount of food, and the price includes a drink. We all left thoroughly stuffed.

It’s always good to talk shop and make friends with our fellow hobbyists. If you’ve not been following Burgers, Barbecue and Everything Else, why not start with his post about the visit and go from there? And then let me know about any other barbecue joints in town that we’ve missed, before Andy scoops us again!

Like barbecue? You can see all the barbecue restaurants that we have visited for our blog (more than 225!) on this map, with links back to the original blog posts. It’s terrific for anybody planning a barbecue road trip through the southeast!