Backstory: A few months ago, I got a whim to visit the small city of Carrollton in west Georgia, to see what barbecue and books could be found. Matt and his wife Kelley came along, and we had a good day, and I came home with an astonishing list of nine previously unknown-to-me barbecue joints along the way that warranted a return trip to document. Nine! A little research when I returned revealed that only one of them, Merle’s, had been written up by another hobbyist blogger, but let this be a lesson to any of us, blogger or writer of books published by university presses, who thinks to make a claim that they know the be-all and end-all of a region’s barbecue. Nine!

Now, I’ve become pretty good at managing several small “sample” meals across several restaurants and several hours, but nine was simply more than I could manage in an afternoon. I decided that I could do six for sure, and maybe even seven, and that I would focus my attention on the GA-61 corridor between Dallas and Carrollton. If I could hit four of the five along that road, and two of the four in Carrollton that I knew, then a return trip a few months later would finish the job.

I also believed that investigating this corridor was my best chance at finding more examples of Hudson’s-style sauce and its accompanying lava-hot mustard. I was right! If you’re not familiar with this blog’s investigations into this Georgia specialty, please click the link above for more stories tagged Hudson’s-style sauce, because you have a lot of wonderful learning ahead of you.

GA-61 runs from Carrollton north through Villa Rica and Dallas before continuing past Cartersville and joining with US-411 to go up through Fairmount and Chatsworth. It enters Tennessee on the way to Ocoee and becomes TN-33. Over the next two chapters, quick little introductions to the five barbecue joints between Carrollton and Dallas, running from south to north.

The first of these is right where the highway begins, at the junction with GA-166. J & W Bar-B-Q opened in the early 1980s as Jordan’s BBQ, across the street from a Royal Waffle King. (The skeletons of that chain are still visible in at least ten towns in Georgia. This former Waffle King is now home to Wing’s Citi Cafe.) J & W is named for its owners, Jim and Wanda Broderick. Wanda started working here more than twenty years ago, as a waitress, when Mr. Jordan ran the place, and now runs it with her husband. 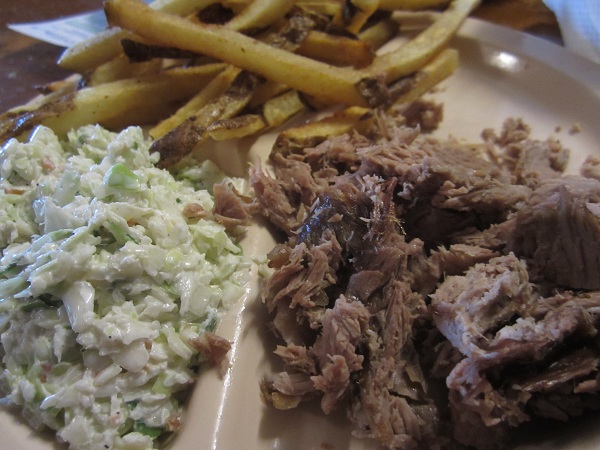 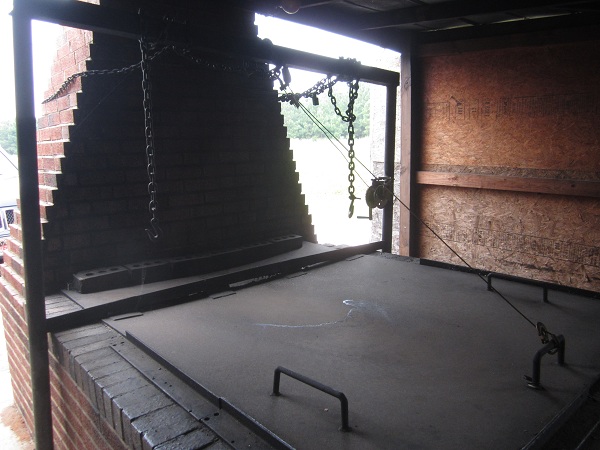 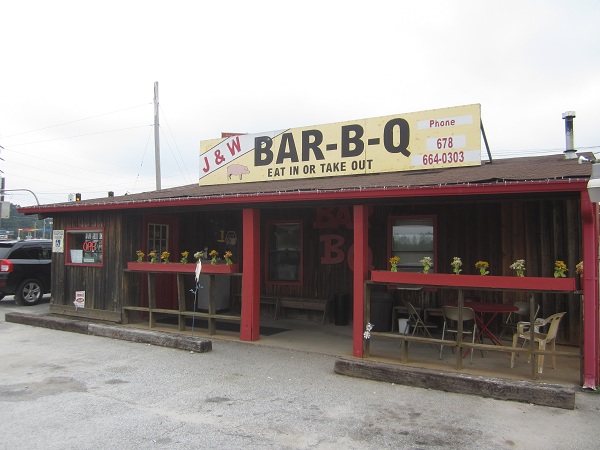 Wanda confirmed that this is another in the chain of Hudson’s-style establishments in the area, explaining that Mr. Jordan had learned to cook barbecue from Buford Hudson and Gerald Wallace. Everything about the place continues that fifty year-old tradition, from the hand-cut fries to the thin, deep red vinegar-and-Worcestershire sauce to the mouth-on-fire mustard sauce to the menu wording of “thrift plates” with smaller portions of meat, slaw, and fries.

My server was a teenager with a Suicide Girls hairdo and color, and she didn’t know much about the place’s history or how to describe the sauces. When I spoke to Wanda for a couple of minutes, I could tell that she really cares for her food and seeing that everything’s done right. “That girl” gave me a side dish of the thicker, sweet, dark brown rib sauce along with my chopped pork, she noted with a sigh. I said that was fine, that I liked to try them all, and Wanda laughed, saying “But the rib sauce doesn’t go well with the pork.” And, honestly, she was right, but the Hudson’s-style sauce went with it just fine.

Going north, the next stop is ten miles away, on the other side of I-20 just before you reach the really terrific downtown strips of Villa Rica. As much as I enjoy Hudson’s sauce, the pork, sauces, and service at Evan’s Barbeque Company were even better. This was my favorite of the seven places that I visited on this jaunt. 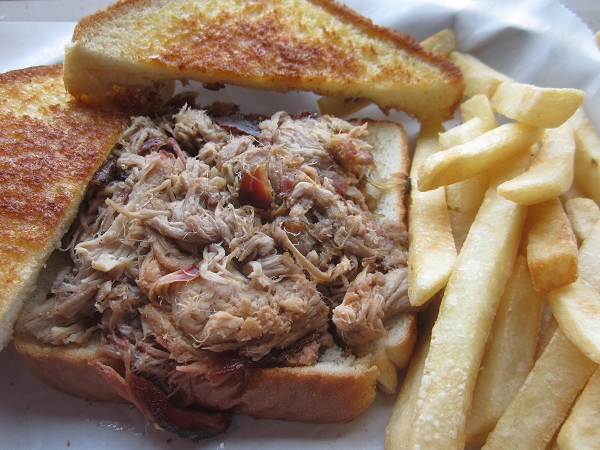 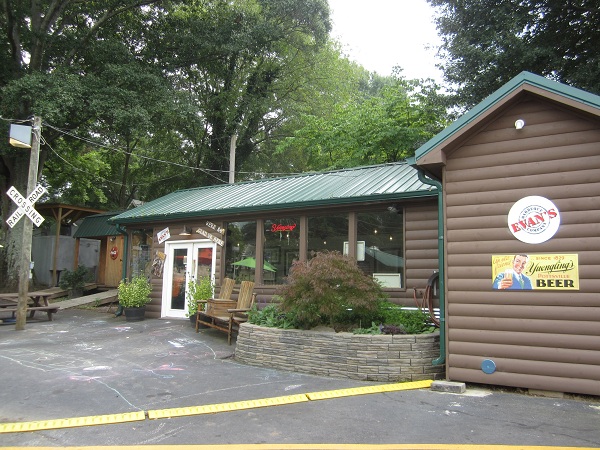 Evan’s is a fairly new place by “barbecue history” standards – it opened in late 2010 – but its owners, Michael and Alicia White, claim more than forty combined years in the restaurant business, mostly in New York City. After their son, Evan, was born, they decided to move to Georgia and enjoy a better quality of life in the south. They found a small building with a drive-through window and dining room, home for a time to Gilley’s Barbecue. There’s a second building with a dining room behind the first. Neither are particularly large; together they can hold maybe fifty people in a pinch.

Evan’s was stop number five on my trip, and I was just about full and willing to skip a side this time out. However, the sandwiches, served on Texas toast, come with fries, which is nice. They’re standard Sysco fries, and nothing special, but it would be churlish to complain since they’re provided at no cost.

But the pork! This is fabulous meat, smoky and just a little bit moist, and there are two sauces available. One was good, I noted, but I used so little of it that I’ve already forgotten it. The other is a thick, black-brown, peppery hot sauce and it is amazing. It’s not as hot as the lava mustard of the Hudson’s-style joints – nothing is – but it has a wonderful, mean kick all the same and complements it perfectly.

The last time that I set out on one of my Circumnavigations, I explained that the hit-n-run nature of them doesn’t leave me much of an opportunity to linger and sample more than just the basics. More than any other stop on this trip, Evan’s calls out for a repeat visit. It was a very, very pleasant surprise and a place where I want to return soon.

Since I’ve arranged this and the next two chapters geographically rather than in order of eatin’, this is just a bit confused, but I was wound down pretty far after stopping at Evan’s, and in the next chapter, I’ll tell you about the first meal of the day along with the last two.