Update: In what has got to be the most ridiculously quick shutdown of any we’ve ever experienced, and hopefully a record we’ll never beat, this restaurant has closed, three days after this post. Best wishes to Russ and James in the future!

I’ve mentioned previously that there are some barbecue places along I-985 / US-23 that I have been saving for a rainy day. Some of these are in the Urbanspoon Gainesville metro listing, but there are a few between exits 4 and 8 that are in the upper north extreme of the Urbanspoon Atlanta conglomerate. I’m aware of three, including one that I’ve been saving for the rainiest day (if you will) and two which are along Buford Highway. Yes, this is the same road that we’ve been discussing at length down in the city and Chamblee and Doraville, thirty miles away. Bella Vivere visited Bastie Boys BBQ back in February and liked it, and so when Matt phoned and asked if I wanted to meet up for some lunch here, I figured we’d have a pretty good meal.

Russ Wages and James Knight, who opened the restaurant a year ago, are huge fans of the Beastie Boys, and not only named their restaurant in tribute, but also several of the dishes and sauces. I’m not especially familiar with these musicians, but I assume that the scratchy-scratch noise that plays when you visit the restaurant’s web site has something to do with them. The vibe of the place is a fairly basic sports bar, with several TVs around to watch the games. They offer special discounts whenever the Falcons or the Bulldogs are playing, and a quite lengthy and cluttered menu that almost buries the barbecue under other offerings, but appearances are deceiving. Since they smoke lots of different meats here, including salmon and turkey, they then use these as the basis for several different “original handheld” sandwiches.

Reminding diners that this place is Georgian and proud, they not only have an over-the-top eating challenge called the Buford T. Justice (it’s $29 and it has everything but the Rolaids), but they’ve also named one of their “handhelds” after Sheriff Justice’s beloved Diablo Sandwich. Here, it’s brisket chili covered in white queso sauce and jalapenos. Sadly, however, they cannot bring you a Dr. Pepper with your Diablo Sandwich, merely a Mr. Pibb. 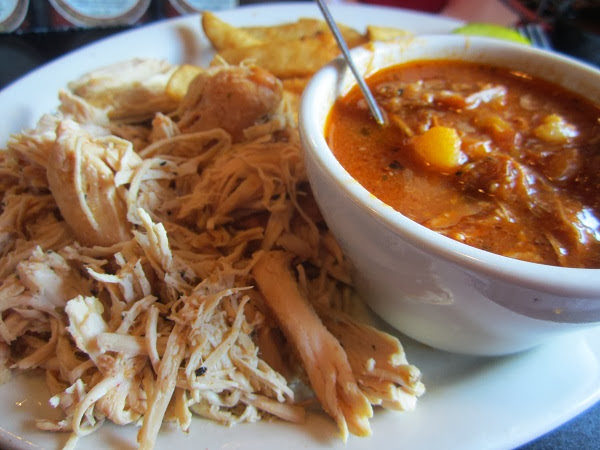 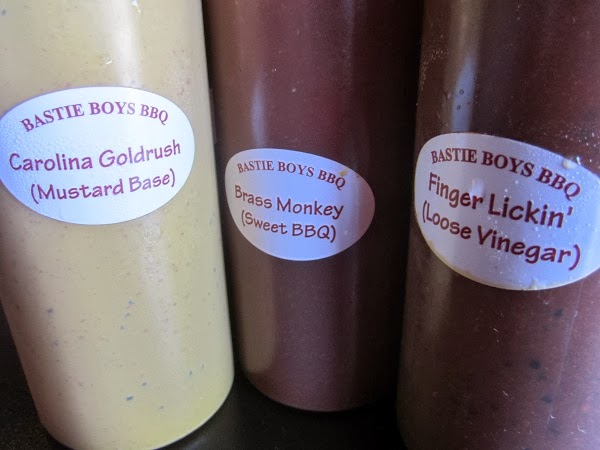 Anyway, Marie was working, so I gave David a ring to see whether he wanted to ride up there with me and the kids. Matt brought Kelley along and since everybody else was digging into the pulled pork, I gave the pulled chicken a try. Everybody was very pleased with the meat, which is smoked over hickory and oak behind the strip mall, and pleased with the selection of sauces. There are four in squeeze bottles on the table, a Texas-style sweet sauce called “Brass Monkey,” a mustard sauce called “Carolina Goldrush,” a sort-of hot sauce called “Sabotage,” and my favorite of the four, a traditionally Georgian dark vinegar-tomato sauce called “Finger Lickin’.” If you ask, they’ll bring out little cups of the more lethal sauces. The “Mango Habanero” was too sweet for my liking, but the “Intergalactic” extra hot is just fantastic. I really enjoyed that with my chicken and with the fried pickles.

We all felt that the sides were a little hit-and-miss. The Brunswick stew was the biggest disappointment. Nobody at the table who ordered it – four of five diners – finished their bowl. It just tasted sort of oily and sad. The mango vinegar slaw was an interesting experiment, but, again, I didn’t enjoy it enough to finish it. The fried pickles, on the other hand, were awesome. These were the proper kind of fried pickles that don’t fall right out of their breading when you bite into them. The toddler goes back and forth through a phase of getting tragically upset when anybody cuts up the wrong food for him to eat easier, and nobody knows until it’s too late what the wrong food is. Usually, you can chop up a hot dog for him with no problem. My daughter sliced one of these pickles in half and he carried on like the end of the world. Always a pleasure to dine with this boy. The other real winner among the sides is the bastie mac, which is mac and cheese served with a healthy mix of crumbled bacon and diced jalapenos. Atlanta’s Bone Lick BBQ serves a similar dish but this just blows the better-known Atlanta version out of the water.

Overall, it was a satisfactory meal if not completely transcendent. Once upon a time, Buford was home to a really great close-out book warehouse and a quite good comic shop. They’re both gone now, and I wish that I knew of something else to do there besides eat. Yes, I suppose that I could just have a day of gluttony and go by Rico’s World Kitchen and the two other barbecue joints nearby (Praise the Lard and Old McDonald’s) in one indulgent afternoon, but I sure would like to have something else to do in town as well. Any thoughts, readers?