If our statistics are any indication, the barbecue map that I built for the CommunityWalk site is one of the most popular features on our site. There’s a link to it at the bottom of just about every chapter about a barbecue restaurant that we’ve posted over the last couple of years and it gets a lot of traffic from barbecue lovers. I was looking at it a few months ago and decided that the eastern suburbs were underrepresented on it. I picked four to visit, stopped by one of them in October, and, one Saturday last month while Marie was working, I took the kids out for an indulgent day of three lunches.

The first stop on the Eastern Suburban BBQ Tour was Bradley’s. They opened this first location on Sigman Road about a mile east of I-20 in 1999. A second store opened on the downtown square of Covington about ten years later. Dustin at The Georgia Barbecue Hunt stopped by the Covington location about a year and a half ago and found that they use an indoor Southern Pride gas oven, but the teens working the counter at the Sigman Road store told me that they have a wood pit out behind the strip mall and smoke over hickory. I find this a little curious; surely one of the hallmarks of operating a chain is ensuring nearly identical tastes and flavors between stores. Even accounting for the reality that subtle changes will often be apparent when smoking over wood, using two entirely different methods simply must result in different flavors, right?

Well, I can’t say for sure about the Covington location, but the one in Conyers is quite good, and the kids and I enjoyed our meal a good deal. 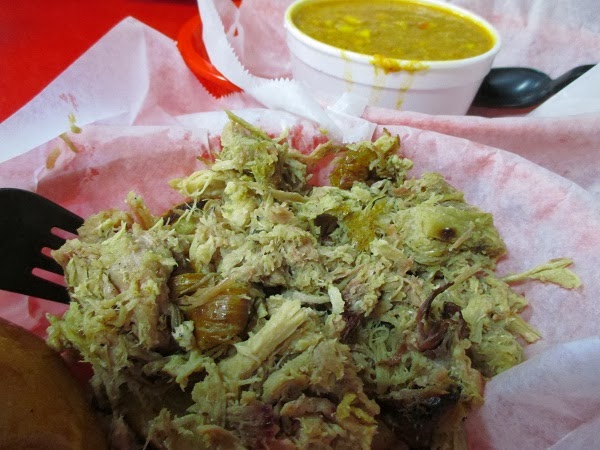 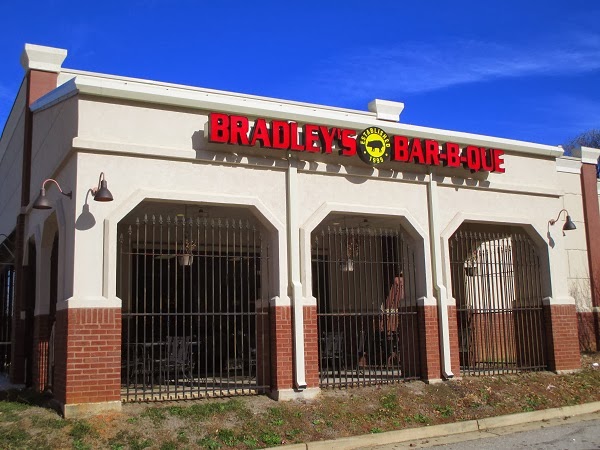 Since we had three meals on the agenda, we ate kind of small to start off. We ordered two pork sandwiches, a side of Brunswick stew, and fries. These are the basic frozen variety, given a good dusting of seasoning salt, and the toddler was quite satisfied with them. We thought that the meat was good, but not outstanding. It was moist and smoky, and needed a little sauce to kick it up a bit. The main sauce was a typical brown type that tasted of tomato, sugar, and pepper with a little vinegar. There was also a redder hot sauce that was a little disappointing; it just tasted like some Red Rooster had been mixed in with it.

The stew was also pretty good. It’s a good tomato base and very meaty. The kids both really enjoyed it, even more than I did. Overall, this is a perfectly fine little stop, good comfort barbecue for people in the area. It’s probably not demanding a trip across town except for those of us in the try-everyplace brigade, but for people in the region, it’s a perfectly reliable place to get a satisfying meal, and its close proximity to the interstate means that curious travelers passing through town have another good choice for what Atlantans think of as a standard barbecue staple. Not a bad beginning to our trip at all, but better things were ahead of us.