If y’all would bear with me for some shop talk before we get things started in today’s story, the explanation of how we learned about this really good bakery in Athens’ Five Points neighborhood crosses paths with a concern that I have.

Longtime readers may recall that I’ve grumbled when I’ve had to go back to edit old entries and remove dead links. It has become quite a pet peeve when people delete their blogs. Sometimes, I’m not too surprised. There are some names that I barely recognize – blogs that never gained many subscribers or, for that matter, many posts. I’ve certainly linked to somebody’s blogspot hobby page that only had maybe six posts and hasn’t been updated in years, but didn’t mind doing it because any account of somebody’s business is something that’s interesting to me, especially when it includes pictures. Old photos of old restaurants always get my attention. When somebody reports that a link is dead, going to a 404 page, I’m never really surprised when it’s one of those oddball, forgotten time-killer pages.

When I get a report that a much-loved blog with an audience has been deleted, that’s actually a bit of a shock. Take Thou Food, which I’m sure many of you remember was a simply terrific blog, lay dormant for quite some time before it vanished. I tried to reach Sean via Twitter and Urbanspoon, but he never replied. That was a shame. Sean’s was the number one Urbanspoon-tracked blog in Athens for ages and ages before we passed him. It’s a shame that a resource that documented so many good Athens eateries no longer exists.

Four years doesn’t seem like long at all for Marie and me. We have been having an absolute ball with this hobby and plan to continue full throttle for quite a long time to come. We have lots of goals and objectives ahead of us. But sadly, so many bloggers whose work I admire and respect reach burnout at about this time in their hobbies, if not sooner. The writers of, for example, Chow Down Atlanta, Eat Buford Highway, and Foodie Buddha are all still out there, often tweeting, but their blogs are rarely if ever updated anymore. I genuinely hope their blogs stick around for as long as there’s a server to host them. In the first two cases, they are terrific resources for the dining in the fascinating Chamblee and Doraville corridor, even if they are slowly becoming outdated and serve as more of a time capsule of how things were during a short period. I wish that there had been blogs forty years ago covering Buford Highway. We’d have access to first-hand documentation of that Shrimp Boats and that Oogleblook that I keep mentioning, for starters!

So if you’re reading this, and you blog, even if you stop, keep your blog around. What you have written is valuable. You’ve covered celebrity chefs and dining trends and signage and controversies and you’ve found old restaurants that nobody knew about until you mentioned them. Even if you’ve “retired,” your opinions mattered and your audience was much larger than you knew. Every day, people that Blogger and WordPress and Google Analytics have no idea how to track considered your thoughts and looked at your pictures. One day, people will want to do research. They’ll want to know what people thought of Peter Chang and Justin Keith and Ford Fry and all their peers. Your work has value and you can control whether it stays in print. Never let it go dark.

Unfortunately, with Sean’s blog gone, the Urbanspoon Athens leaderboard is a much quieter place. The only active, Athens-based blog on the chart at the end of last year was the fun My So-Called (Mommy) Life. The others you saw in the top ten were either inactive or based in other towns and occasionally visiting the Classic City. Like us!

I started looking around to find some bloggers, expecting there would be a few at UGA, who were talking about food and eating and just hadn’t hooked up with Urbanspoon yet. I found Caramel and Salt through the Southern Blog Society, a community of southern lifestyle bloggers, and, through her, another Athens blog, Cupcakes and Sunshine. I wrote them both and encouraged them to connect with Urbanspoon – hooray, they did! – and read that they’d met up and enjoyed the pastries at Independent Baking Company, which opened in the fall semester. 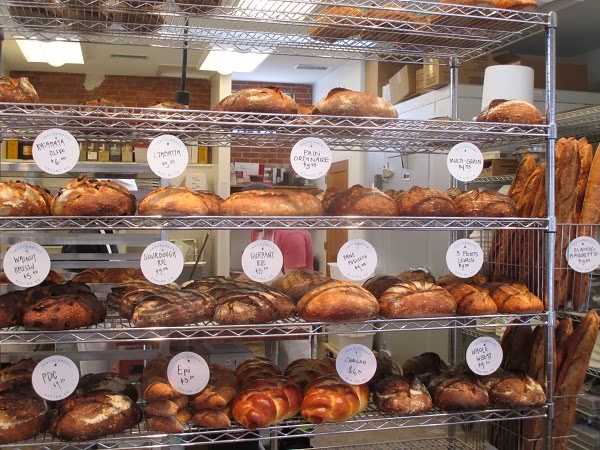 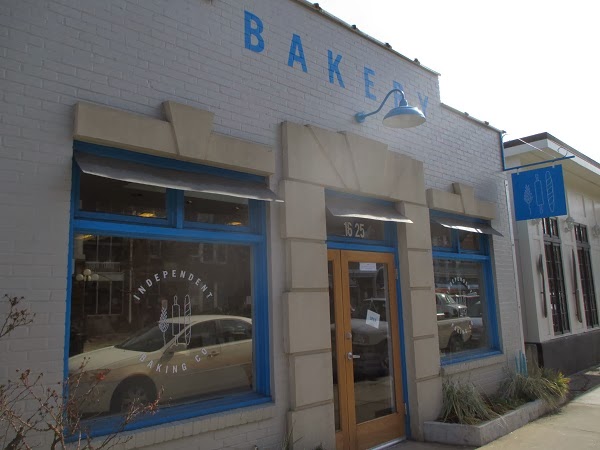 How cute is this place? After our lunch and long conversation at Weaver D’s, we’d gone to Bizarro Wuxtry to window-shop and visit friends, and took a detour to Five Points to pick up treats before heading to Whit Davis Road. They only have some counter seating along the front windows, as most of the interior space is given over to their baking facility. This actually more than makes up for the Jittery Joe’s that had been next door for so long being closed – how dare they shut that location, have they any idea how much of my senior paper on Ezra Pound had been written there?! – because the wonderful smell of fresh-baked bread is the most pleasant aroma. Well, right behind smoked pork, anyway.

It’s run by a fellow named Thom Leonard, who keeps things very simple and low-priced. It’s a great place to stop for anything from croissants to cookies to baquettes to ciabatta. Looking for some baked goods to take to Southeast Clarke Park, we were spoiled for choice. Marie settled on a small pain au chocolate, and the toddler asked for a chocolate chip cookie, and I got two huge, crusty rolls of French bread. It was maybe five dollars for the lot, an absolute steal considering the quality of the food. I’m so glad that I got so troubled by the lack of local blogs on Urbanspoon, so that I found these two bloggers and this great little place. However many more trips to Athens we have left in us, I’m thinking that Independent Baking Company could be a regular stop for a snack. 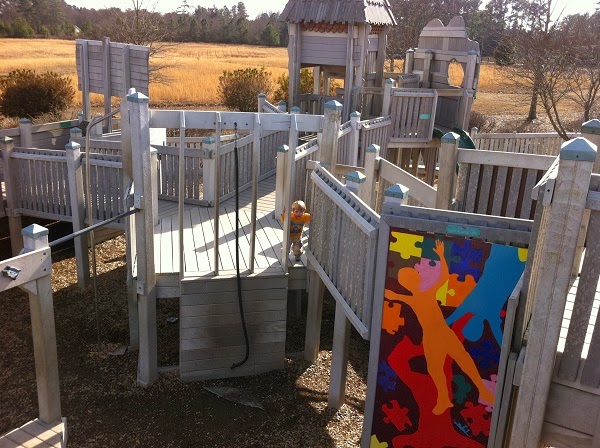 Now that our boy is old enough, whenever the weather is nice, we’ll probably be visiting Southeast Clarke Park to let the toddler run riot over their quite excellent play fort. We arrived around two, and had the place mostly to ourselves for a while. Nearer to three, quite a few other families joined us, including our friend Eleanor and her two boys. Of course, we have always strongly encouraged all our readers to visit Athens, one of the best small cities in America. If you have a kid aged between, say, two and ten, make time for this play fort. Give yourself a little bit of exercise, or possibly a nap, and your child will have a great time here. Then go buy some records and barbecue.