Allen & Son was the farthest east that I ate on this trip to North Carolina, and that’s still not east enough to actually be Eastern North Carolina barbecue. Like the restaurants in the Piedmont Triad, they smoke pork shoulders. However, the sauce is proving to be a little bone of contention.

I have been given to understand that Eastern-style sauce is generally clear, but you can see the bottle in the first picture below and the sauce in it is certainly not clear. It’s every bit as brown as the sauces I’d sampled earlier in the day, if not more so, and certainly had the same mild and gentle hint of either tomatoes or ketchup with the vinegar. So I was a bit surprised, as I rounded up a sampling of links about Allen & Son for further reading below, to see so many writers, both locals and tourists, call it an Eastern-style sauce over Piedmont-style meat. Compounding the confusion, I did have two clear sauces on my second day of the trip, miles and miles further west than this place.

I was pleased to see that Allen & Son makes Brunswick stew. I’m a Georgia boy and this is a very common side in my state, seen at almost every barbecue restaurant. I didn’t order it because the prices were really high here, by far the most expensive of any of the places that I visited on this trip. $12.15 for a que and stew plate is higher than most places in Atlanta, where one can make the argument that the rent can be pretty steep, too. So I settled for a sandwich and a side of house-cut fries. With my tip, this still came to eleven bucks.

That’s merely an observation, and not a complaint. Here’s the complaint: I asked my server to please leave the sandwich’s slaw on the side. She came back to me after a couple of minutes to apologize, but if they put the slaw on the side, they’d have to charge me for a side. I said to leave it off entirely and don’t charge me for it. I’ve never heard of such a thing before. Two bucks to drop the spoonful of slaw onto the plate instead of onto the pork? I made sure not to ask for a second napkin. 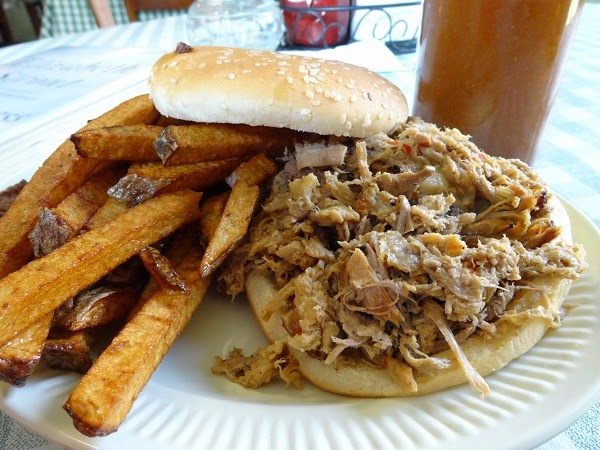 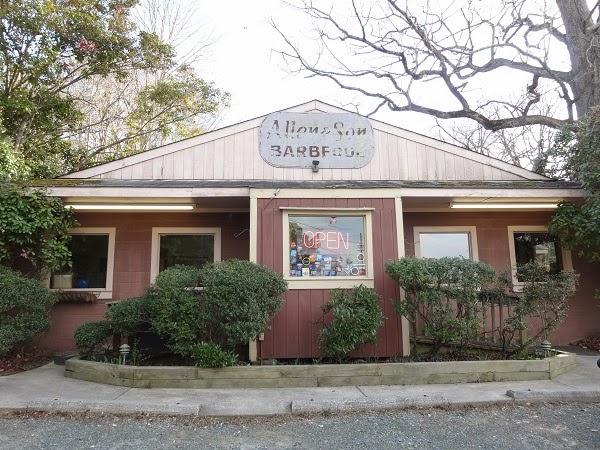 As you’ll see as this travelogue continues through April, I ate at a lot of places, and this was the only disagreeable house rule of the entire trip. Everywhere else, I had great experiences. That’s such a shame, because this restaurant has everything else to recommend. They have a great, secluded and quiet location, and serve up some really excellent food. Many restaurants in North Carolina are said to have quietly moved over to indoor smoking with gas while maintaining a wood pile for appearance’s sake. That definitely isn’t the case here. The owner, Keith Allen – he’s the “son” in the restaurant’s name – splits the hickory logs out back and you can absolutely taste the smoke.

Yes, this food was very good. One of my fellow writers used the expression “attention to detail” and that’s certainly correct. We’ve all eaten at places where the food is just shoveled out, but the people at Allen & Son take a lot of pride in their work. I would not object to a second visit at all. There has also been a second location in Pittsboro for several years, and, in October of last year, they bought the closed Jackson Brothers BBQ in Sanford. Some of the locals clarify that the Pittsboro experience is quite different from the Chapel Hill one (see this trip report from the Roadfood.com forums) and it’s the Pittsboro management that moved into Sanford, but if the food’s anything like what you get at the original, it seems worth a stop.

Other blog posts about Allen & Son: