One of the nicest parts of our hobby is stumbling across a place that we’ve never heard of and having a terrific meal. This doesn’t happen very frequently. Most of the great, destination-worthy restaurants that we visit have already been documented by somebody somewhere and end up on our to-do list. We often find good meals without hoopla, but when we find something great, we are left wondering why the heck nobody else is talking about it.

When we left the previous spot, Paradise Country, I was just about as full as a fellow could be, and we did not plan to stop again. So we moseyed north on 441, crossing Lake Sinclair and marveling at the gigantic smokestacks of Georgia Power’s Plant Branch, which was decommissioned and closed last year. Approaching Eatonton, we spotted a sign for Andy’s BBQ. Since it is very unlikely we’ll be back this way anytime soon, I made the command decision to make the stop. If I’ve made a better decision lately, I don’t remember it. 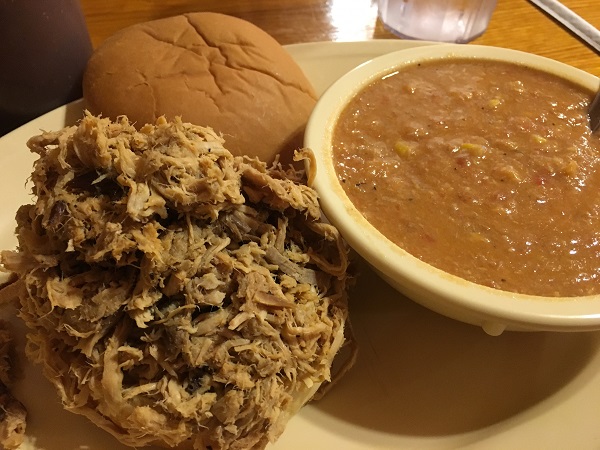 A couple of weeks after our visit, I phoned Andy Holder to find out more about his wonderful sauce and very, very tasty chopped pork. Andy told me that he opened this restaurant in 1999, but had previously sold barbecue from another site in 1991 and for a few years after. The sauce is a very old family recipe going back to his great grandfather’s time. Purely by chance, the vinegar-pepper sauce is astonishingly similar to the one used by Allen & Son Barbeque in Chapel Hill NC. I’m almost positive that Allen & Son uses pork shoulder in their barbecue, while Andy explained that he uses hams. (Shoulders are from the front legs and hams from the hind legs.) So the preparation at the two restaurants is not identical, but the taste is remarkably similar.

Allen & Son is a place that dozens of people have written about, and which is considered hundred-mile or more destination dining by many. To be blunt, Andy’s is every bit as good, and deserves to be written up by at least as many bloggers, hobbyists, roadfooders and smart-alecs. This is great barbecue, with a lot of history. 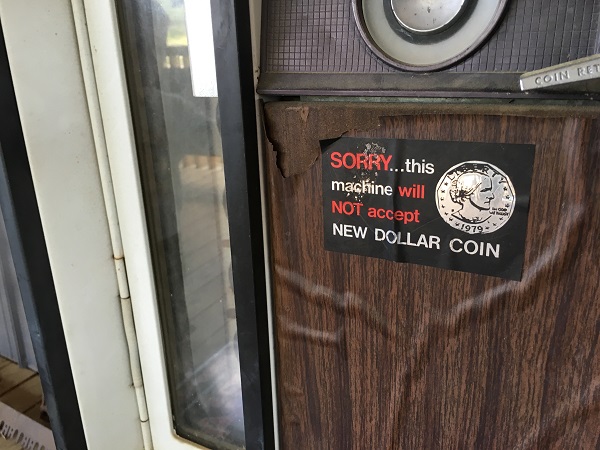 The stew is a very traditional Georgia recipe, with no cheap extenders and no unusual ingredients. It’s incredibly rich and very full of flavor, a real pleasure to sip. It’s a perfect way to accompany this terrific chopped pork sandwich. Go light on the sauce when you’re using a vinegar-pepper blend like this. Don’t drown the meat; shake the sauce and add a little at a time. It’s a great meal. My heart may belong to Old Clinton, which we had visited earlier in the afternoon, but if we hadn’t been there first, I’d honestly say this was the best barbecue meal I’d had since we went to the Butt Hutt in Athens in the middle of March. Not bad for a place that doesn’t yet have a listing on Google Maps.

Andy’s restaurant is a big barn of a place, full of Coca-Cola memorabilia and advertising, including a great old Coke machine on their front porch that doesn’t take Susan B. Anthony dollars. Perhaps some of our older readers might remember that omnipresent sticker from the late seventies. The place is really busy on Friday and Saturday evenings, and people pass the time on the large porch waiting for a table enjoying a rocking chair or playing a little cornhole. Whenever you go, don’t weigh yourself down with three barbecue meals and some fried chicken first.