Readers in the south “of a certain age” may recall some TV commercials way back when that advertised some big chain – Pizza Hut, probably – and their then-new “deep dish pizza.” For those of us outside Chicago, this was our introduction to the concept that in the Windy City, they have a very curious regional take on this food. The ads, as I recall them, had the voice of a Barry White impersonator dubbed over some little girls. I don’t believe that the product was a big hit, and I don’t believe that the good people of Chicago thought that it was in any way representative of one of their town’s specialties, but it probably did more than anything else to inform the general public that such a thing existed.

Since I’ve never been to Chicago, and since, with the exception of this one restaurant, there’s no place around these parts to obtain a Chicago-style pizza, I remained blissfully unaware of what deep dish pies even looked like until last November, when The Daily Show‘s Jon Stewart went to war with the Windy City over some local media potshots thrown at his beloved New York slices. (As you’ll recall from his earlier battles with Donald Trump, Stewart takes the subject very seriously.) If you missed this segment, in which Stewart describes deep dish pizza as “tomato soup in a bread bowl,” you really should go watch it.

Deep dish pies were first seen in Chicago in 1943 at a shop called Pizzeria Uno. They were surpassed in depth in 1971, when Rocco Palese, a recent immigrant from Turin who had recently opened a shop called Nancy’s that was named for his wife, improved on the traditional deep dish recipe with a two-and-a-half inch-deep “stuffed pizza.” In this version, the fresh dough is hand-pressed into a pan, filled with two layers of ingredients (“toppings” is not strictly accurate) separated by cheese, and then sealed by a final, thinner, layer of dough with a small hole in the center. It is then topped off with a tomato sauce. 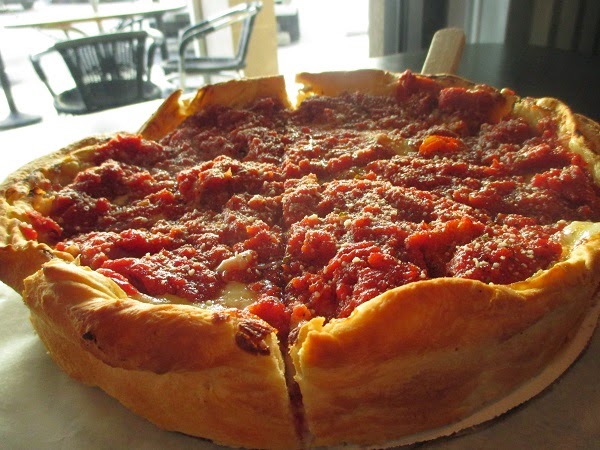 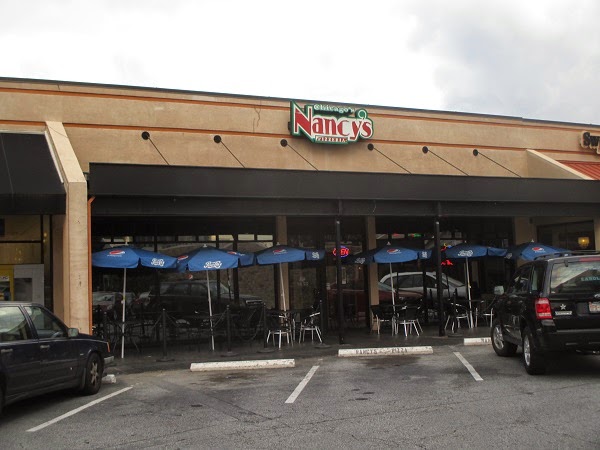 The Paleses sold the small chain to Chicago Franchise Systems, Inc. in 1990. They now operate three dozen Nancy’s locations in Illinois and two here in Atlanta which are the only places for more than a hundred miles where anybody can get a stuffed Chicago pie*. One is in the Old Fourth Ward and the other’s in Buckhead, where we stopped in for supper. Curious about deep dish after that Daily Show segment, it had actually been on my radar for a few months before the restaurant’s PR team reached out to us and asked if we’d like to have a meal on them. This seems to be part of a larger PR strategy that includes the employment of Chicago sports legend Mike Ditka as the new spokesperson for Nancy’s and for CFS’s sister restaurant, Al’s Beef. Bit of a shame that we won’t see those TV ads in this market, really.

So the four of us went down on a Thursday and ordered a few things from the menu. We anticipated the three year-old not being into anything as unusual as this, so we got a traditional thin-crust cheese slice for him, and my daughter selected a medium Vinni’s Special pizza for us to share, along with a meatball sandwich. This pizza comes with sausage, pepperoni, and roasted red peppers. Now, having said that, if I were not sharing with my picky daughter, then I definitely would have ordered the Spicy Pepino pizza. This comes with pepperoni, banana peppers, and some of that awesome Chicago hot Giardiniera relish that I love and rarely see. (Giardiniera was among the toppings at the wonderful and sadly missed America’s Top Dog, and can be found at E. 48th Street Market in Dunwoody.) Although, having said that, we spoke with this location’s owner, Greg Cole, who gave me a demonstration of how the pies are formed and baked, and he is very proud that they source all of their vegetables locally and that they arrive fresh regularly throughout the week.

Having finally tried this pie, I have to say that Stewart – and his writers! – were a little unfair, but that’s half the fun of that show anyway. Pizza – and I’ll touch on this again when we have a new story about Varasano’s next week – is similar to barbecue in that comparing one regional style to another misses the point. There is as much sense in comparing Texas brisket to eastern Carolina whole hog as there is deep dish to a New York cheese slice as there is a swing to a seesaw: none whatsoever. A Chicago-style deep dish pie is its own thing, and it should be judged by its own merits, not against what seems similar. I thought this was pretty good and had an interesting flavor and texture. I wouldn’t mind a return visit at all.

That said, one thing that we didn’t anticipate is that even a medium is too darn much for three people if you’re also ordering a sandwich to sample. One slice was enough to fill both Marie and my daughter, and I managed two. Deep dish means that you are getting a metric buttload of food. A small pie is more than enough for two diners, and they also sell extra-small personal pies for people arriving on their own. So any return will bear that in mind.

We would also make sure that we arrive earlier in the evening. One thing about the visit that really did grate was that they were staying open late on this evening for night five of a Beyonce-themed karaoke competition to win tickets to her concert, and, shortly after eight, they began the lengthy process of testing the speakers and everything at very family-unfriendly volume. Our friends Vincent and Helen told me of a Friday night when they arrived quite late from Alabama to pick up a pie to take to their place and found the lights dimmed, the music blistering, and the crowd dancing, so weekends can clearly get really fun if you’re in the market for that. When they turned up the volume and the three year-old started whining that his ears hurt, we beat a hasty retreat. I did wish that they had noted that a little one was still trying to eat before they cranked up the music so loud. So, lunch and early dinners only, if you’re in our boring old family demographic!

*Note: That is not correct. As explained by a commenter below, another Chicago-based chain, Aurelio’s, has a location in the Atlanta area, on Johnson Ferry Road in Marietta.

Other blog posts about Nancy’s Pizza in Atlanta: