I made a factual error in the summer when I wrote about Nancy’s Pizza, a large Illinois-based chain with two stores in Atlanta. I wrote then that these were “the only places for more than a hundred miles where anybody can get a stuffed Chicago pie,” and that’s not true. Another mid-sized Illinois chain, Aurelio’s, has a single outpost in Cobb County.

There are three family-owned Aurelio’s in the Chicago neighborhoods of Homewood, Richton Park and South Holland, and 37 franchised locations. Most are in Illinois and Indiana, with oddball little outposts in Nevada, Minnesota, Florida (Fort Myers and Naples) and the one in east Cobb, which is quietly tucked into the same little strip mall on Johnson Ferry as two places that we have written about before, Mediterranean Grill and Zeal.

Since we tend to overlook most of the many pizzerias in town unless we hear some buzz about it, it’s possible I might have never popped into Aurelio’s had we not received a comment from a writer who went by the name “Average Joe.” So I had a nice giggle when I visited one Friday night earlier this month and saw this little slogan on the menu: “Tell ’em ‘Joe sent me’.” He did! 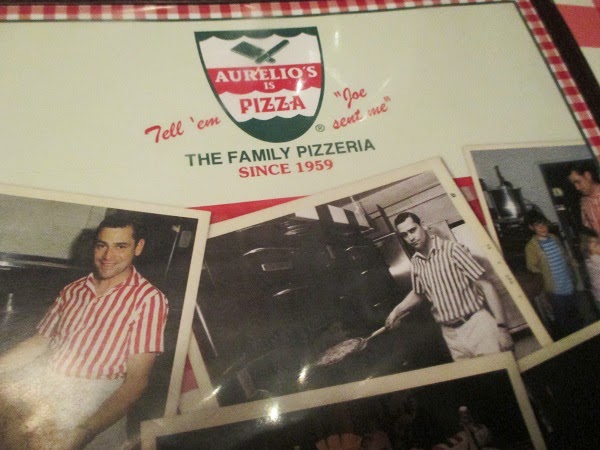 The original location, on Ridge Road in Homewood, is no longer there. Joe Aurelio Jr. opened the store in 1959, selling beef sandwiches and pizza, which was then still an unusual novelty, to guests in a tiny dining room. Through the 1960s, as Aurelio’s and a local rival, Rosati’s, grew more and more popular, Joe bought out the neighboring storefronts and expanded four separate times, doing little to quell the wait that guests endured. In 1977, he moved the business to what was, then, said to be the largest pizzeria in the world, a 12,000 square foot former warehouse on Harwood Avenue. Aurelio began offering franchises in the mid-1980s. 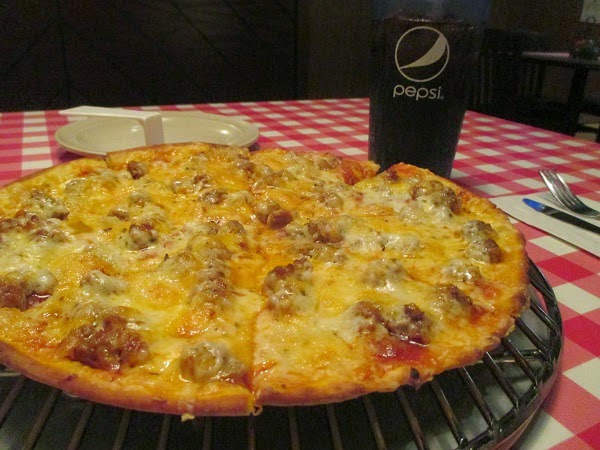 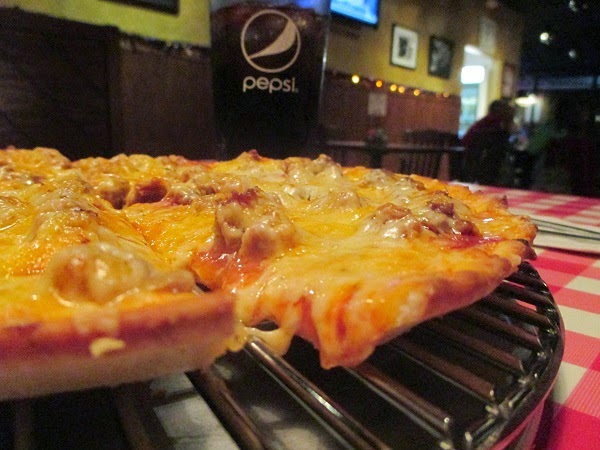 It was just me on this trip; Marie and our son were out of town, and my daughter bailed on me for a football game. So my book and I took a booth, and, following “Average Joe’s” advice, I ordered a small thin crust pizza with sausage and cheese. My “informant” told me that he’s not as keen on the stuffed pizza here as he is the thin crust.

I’ve had thin crust pies off and on for years, but this was the first time I have tried one in a restaurant that boasts actual Chicago connections. I think that the sauce really makes it. It’s a terrific, extra gooey and sweet tomato sauce that stayed thin and oozy as I ate. The crust and cheese and sausage were all pretty good, but the sauce elevated it. The service was very attentive, apart from a curious stinginess about napkins. Sauce like this is going to get all over your chin!

I had to drive past a couple of pizza joints that I prefer to get here, but this wasn’t a bad meal at all. I wouldn’t mind another visit someday, although next time I’ll probably get a stuffed pie with spinach and see how that tastes.