I was invited to visit the new Avalon development in Alpharetta, which opens to the public tomorrow and which is the absolute best mixed-use development in the metro area to be named after a Roxy Music album (yes, even better than “Stranded in Forest Park”), to check out the new Whole Foods Market on a little media tour. Touring grocery stores isn’t something that we normally do here, but Whole Foods is just so fun and over the top that we enjoy visiting from time to time. We also like that you can get lots of local and regional treats here, from produce from area farms to craft beers from Georgia breweries to the terrific Nello’s Sauce from Raleigh. 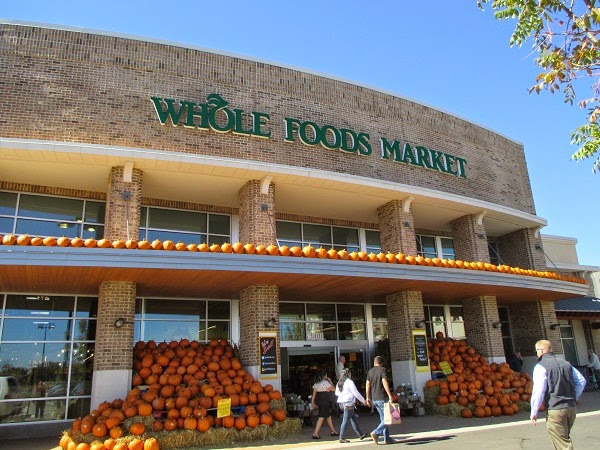 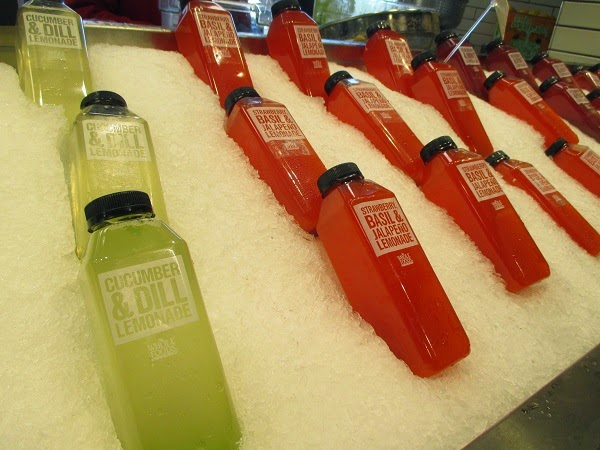 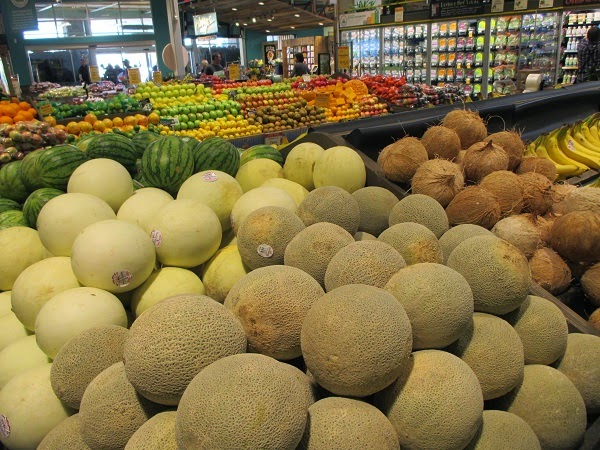 The only thing this Whole Foods doesn’t have is a parking lot that you’ll want to deal with. Whole Foods bought Harry’s Farmers Market, a locally-owned chain of four grocery stores, in 2001. They converted the interiors to more closely fit the national Whole Foods skeleton, but never changed the exterior signage on the stores. I mention this because we’re pretty familiar with the giant Harry’s/Whole Foods in Marietta; we tend to do a little shopping there every five or six weeks, and they have a super-gigantic parking lot all to themselves. The new Whole Foods has a much, much smaller lot which proved to be very frustrating. Hopefully, this will be handled when the rest of Avalon opens and the other lots and decks become available.

Inside, the produce department is every bit as impressive as we’ve come to expect, with selections from all sorts of nearby growers, and a newly rolled-out rating system (good, better, and best) to rank the sustainability practices of the farms. And they have a very neat little station in the lower left corner of the store which I loved: a juicing island. They’re making fresh juices and cleansers – between 25 and 50 flavors, depending on the season – and some of them are downright tasty. After only four days, the Green Lemonade, made with (errr) spinach and kale, is the local favorite. I didn’t care for it, but the Cucumber and Dill Lemonade was terrific. 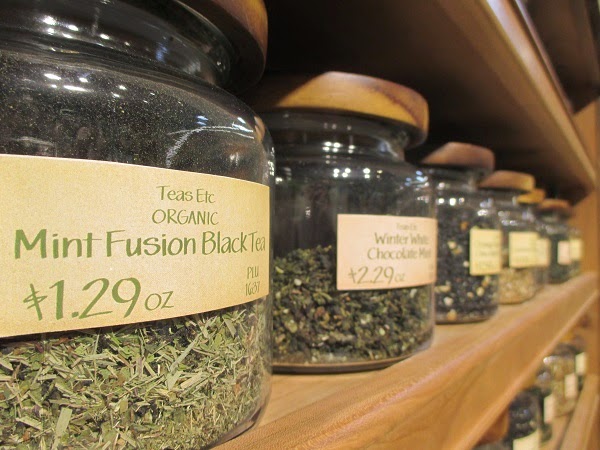 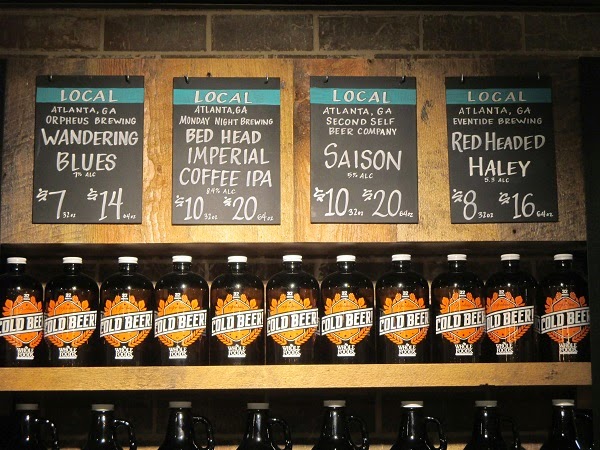 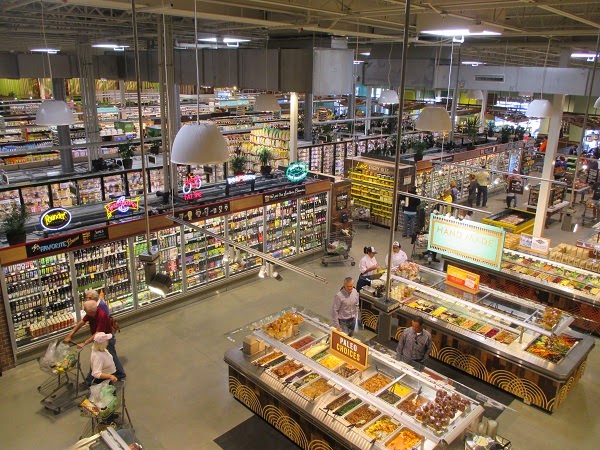 Some of the extras at this store were new to me, like the loose leaf teas and the growler station, while others, like the grind-your-own nut butters, regular cooking demonstrations and samples, and huge selections of small-market sodas, salsas, and sauces, were what I expected to find. The growler station was a very nice surprise. They only have four at any given time, and the prices are, unsurprisingly. a few dollars higher than at some of the craft beer stores in the area, but it’s very nice to go into a big store like this and see that they’re offering selections from Eventide, Monday Night, Orpheus, and Second Self.

As with any Whole Foods, they take the idea of a salad bar and ramp it up so that even the pickiest eater in your family will find something to enjoy. This one amused me with its “Paleo Choices” section and impressed me with its Ethiopian foods section. Meanwhile, there are made-to-order hot foods in a little “food court,” including flatbread pizza in a wood-burning oven, a build-your-own stir-fry similar to The Real Chow Baby / Big Chow Grill, and a little Indian restaurant-within-a-store that was offering samples of a very good chicken tikka masala over yellow rice. 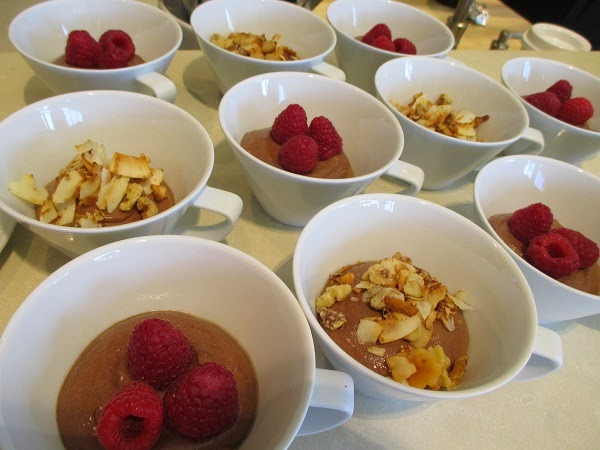 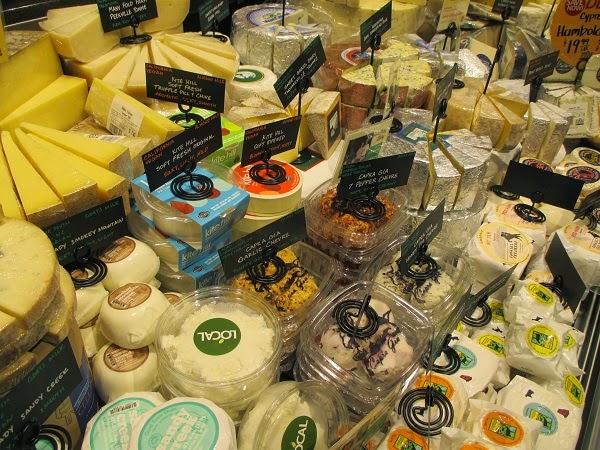 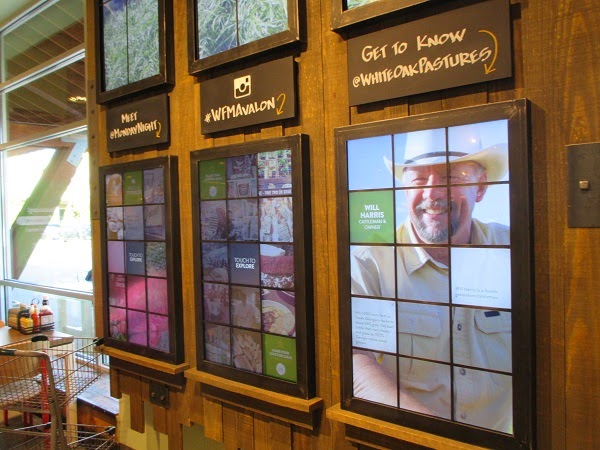 This location has a Salud! cooking school classroom, and we got to enjoy a short break from the tour with a mug of chocolate mousse. The school hosts everything from craft beer tastings to kids’ pasta cooking to guest appearances by area chefs. Dave Berry from Horseradish Grill gave a class on southern classics last week; Andreas Georgakopoulos from Villa Christina will be introducing students to Greek small plates on the 4th. Click that link to find out more about future classes; they have something new almost every day.

We also enjoyed little samples of gelato from a quite hilariously-designed “wheel” next to the cupcakes and other treats. The wheel spins around so that the server can access several flavors from a small space, but it also features a low handrail on the outside. I can imagine parents finding this rail quite frustrating as kids grab on for dear life to keep from being taken away from the sweets!

Throughout the store, there are various touch-screens to let guests interact on a level that you just wouldn’t have seen at a suburban Big Star once upon a time. You can sweep around to find facts and photos about the farms and breweries that are supplying the store, and also get live updates from people using Instagram and tagging #wfmavalon with their photos. Not a bad way to spend a couple of minutes while waiting for a scoop of High Road ice cream in a pint of Monday Night Drafty Kilt, really!

And yes, the olive bar and the cheese selection that we love at the Marietta Harry’s/Whole Foods is intact. That’s what it all boils down to, really. Can I get a bucket of olives? Can I get a half-pound of Georgia Gouda from Sweet Grass Dairy? Then all’s right in the world. Apart from the parking. I like this place, and next time we’re in Alpharetta, we might swing by so that Marie can compare the experience against our store. We might want to grab lunch somewhere first… after all, we always eat at Baldinos before we shop at the one near us.