From time to time, we have commented how it’s not entirely fair to form a first impression of a restaurant, or “judge” it in any public fashion, based on the experience that you get during a festival, when the staff can be completely overwhelmed. Call it grading on a curve, I suppose. With that in mind, Roxx Tavern had been on my mind for a revisit for quite a few weeks (here’s the original story). I made it over to their store on Cheshire Bridge – they’ve since opened a second location in Tucker – one Friday afternoon recently. It should have been the after-lunch lull, about 2:15, but they were still pretty busy, hosting several large parties and their patio was more than half-filled. Then I remembered: this was Pride Weekend, and Roxx has been a Pride destination, for locals and for tourists, for many years.

Roxx is a very gay-friendly restaurant, and quite a few of its patrons – and servers – skew a little older. The clientele also skewed almost exclusively male during my visit. There was only one lady on the patio at all during my lunch, perhaps in her mid-sixties and surrounded by a long table full of fellows wishing her a happy birthday and having an absolute ball.

I mentioned to my server that they must have had a crazy lunch, and he tut-tutted that I had no idea. I asked whether Roxx was going to get a break all weekend, and he said “Absolutely not. This is as slow as it will be, and the kitchen’s been a mess for two hours.” That didn’t bode well. Another server lamented that he has been with Roxx for four years and has not been to Pride in all this time; all of the staff works all of the weekend, nobody’s allowed a vacation or a sick day during the festival.

All that said, “grading on a curve” was absolutely unnecessary on this occasion. If I hadn’t read this was Pride weekend, I wouldn’t have known from this allegedly “messy” kitchen. I wanted to go back to Roxx because they serve extremely good comfort food, cooked to order and served by an excellent staff, and that’s what I got. Crazy lunch be darned, the servers might have been busier than usual, but that kitchen was on the ball. 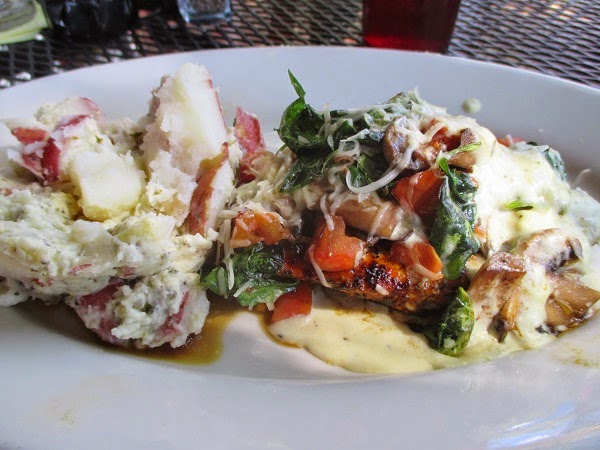 I ordered the Chicken Spinacio and it was completely delicious. The boneless chicken breast was juicy and flavorful. It’s topped with spinach, mushrooms, tomatoes and Parmesan cheese over what they describe as an “herb-cheese sauce.” I decided to have only one side and indulged with their amazing red potato salad. I suppose that I could have had a second side, but since the potato salad probably had as many calories as any two ordinary sides, I left it at that.

At any rate, this was probably my fifth or sixth visit to Roxx. I always get something different here, and I always leave pleased. They do terrific work. 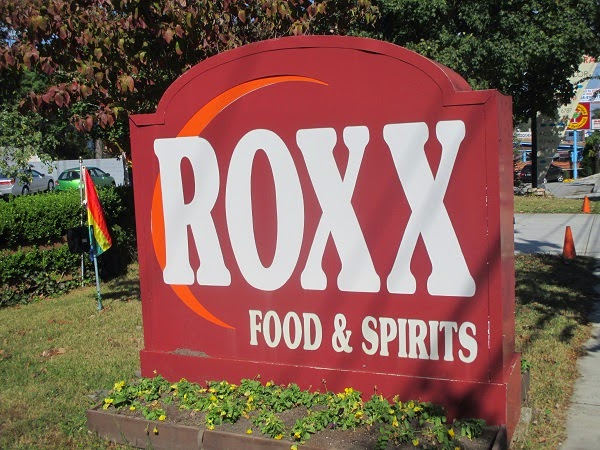 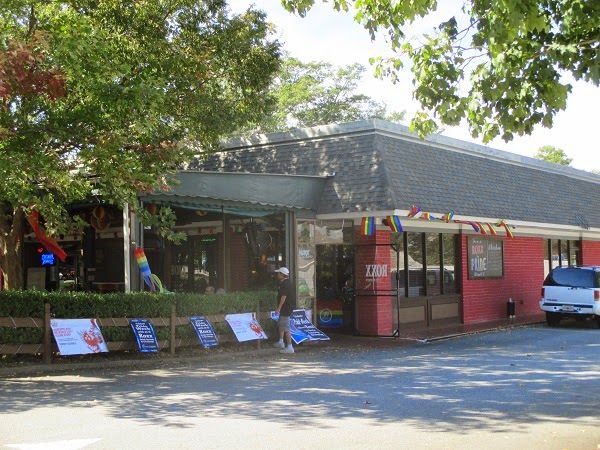 Incidentally, one completely silly reason that I wanted to return to Roxx with an eye for a story, rather than just a good meal, is that nobody, anywhere, has ever taken a good photograph of the building, and I thought I might have better luck this time around. I didn’t. Roxx moved into a vacant Burger King – one of the late sixties “Home of the Whopper” designs, which must have won an award for ugliness – and then camouflaged the building with a patio and several trees. The dark interior shows off nothing of its fast food ancestry; it looks more like a small Applebee’s or something. The patio is open and welcoming. Design nerds and lousy photographers like me will find the experience a challenging distraction. Fortunately, the meals are good enough to make the visit a success even if we don’t bring home pictures worth sharing!

Other blog posts about Roxx Tavern: