This is Marie, contributing an article about froyo. Actually, I brought along our froyo expert, the teenager. She likes froyo more than anybody else and makes “Ooooh, shiny” type noises every time we pass any froyo place. However, as our regular readers are aware, I am the serious dessert fiend of the family, but I have an abusive relationship with dairy. I am, regrettably, lactose intolerant. While of course (of COURSE!) I prefer the high-butterfat, extremely creamy, hard-as-a-brick-when-cold type of ice cream, the active cultures in frozen yogurt mean I can have a bowl without it hating me back. Nevertheless I took it easy.

Menchie’s was founded in 2007 by Danna & Adam Caldwell in Encina, California, who gave their store a smiling mascot – it reminds the teenager of “chibi”-style Japanese cartoons – and began franchising their concept the following year. Since 2008, they have exploded in popularity and growth, with more than 200 stores across the country. The first Atlanta store opened in 2010. Unfortunately, everybody else in the frozen yogurt world opened an Atlanta store in 2010 as well, leading to brand confusion and oversaturation.

Emphasizing smiles and cuteness, as well as the quality of their yogurt, has helped set Menchie’s apart from their competitors, but the reality is that too many competitors opened in Atlanta between 2010-2012, making all of these Atlanta-area stores regular visitors to the “deathwatch” columns at Tomorrow’s News Today. A few of the Menchie’s locations have shuttered, but there currently seem to be eleven Menchie’s stores around Atlanta and its suburbs, with others around Athens and Warner Robins, and one coming soon to Brunswick.

Menchie’s has a few interesting features on their web site for the allergen and food intolerance crowd – everything is labeled very clearly whether it is kosher (most of the options), has soy, is equipped with active cultures, lacks HFCS, and so on and so forth. I approve. Even if that does mean some folks will find that their very favoritest flavor in the whole wide world has something in it that they’re not supposed to have, there are plenty of options for alternates. Oh, and little things stand out like the tag on the strawberry cheesecake flavor indicating that actual strawberries are among the ingredients. 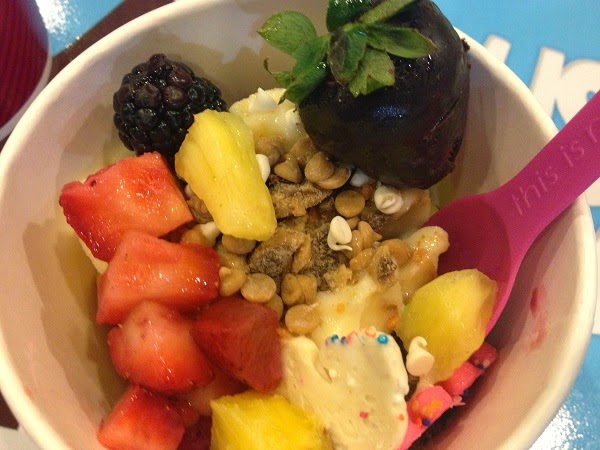 The stores have the usual selections for toppings – Oreo bits, gummy bears, sprinkles, fruit, and so forth, though most astonishingly the fruit option includes chocolate covered strawberries. That’s not something I’ve seen before.

The teenager said that she went with most of the available chocolate variant flavors as her flavor theme, and I rather lost track of the ones she mentioned as it was not a short list. I do recall that she said the mint chocolate was extremely minty, in a good way. Aside from that I was rather let down by my expert opinion holder, as she ate up her serving in about three seconds flat.

I had decided to get a swirl of the month’s special flavor, Oreo (it’s divided into “just the cookie” and “just the crème”) and sprinkle actual Oreo on top to see how it stacked up. The cream part was rather closer to the cookie inspiration than the chocolate part mainly because a good bit of the experience of an Oreo is the crunchiness, which is inevitably lacking in a soft creamy product. I’m not an Oreo milk dunker; I split the cookies and eat the “crème” and cookie separately. Anyway, if you would like to try the Oreo flavors, they leave at the end of the month so you have a time limit!

Since our first visit was slightly marred by the sudden onset of a headache on the way, we had to make a second visit to ensure that any impressions that may have been altered by the fiery laser beams shooting into my eyeballs were accounted for. We also brought along the toddler as an impartial third observer.

The teenager, released from any requirement to try the special flavors, made a (to me) hideous concoction of lemonade and coffee and who knows what else. The boy, although he was staunchly pro-vanilla on the entire way over, decided to flip and would only accept “cookie” flavor with chocolate sprinkles after having a taste of a few flavors from the test cups. I will spare you the photo of his bowl, as chocolate with chocolate sprinkles isn’t the most photogenic of items. I decided to make a better attempt to make an Oreo in a bowl than last time, and layered two bars of cookie flavor on the sides with a band of “crème” down the middle, then put on a light sprinkling of Oreo bits and white chocolate chips.

I have to say that the “crème” flavor isn’t easily distinguishable from vanilla, but it really benefits from white chocolate chips. They complement nicely. At least they did until the toddler decided the white chips were all his, and relieved me of them. Ah well.