I left my house before six in the morning, and finally arrived at Parker’s Barbecue in Wilson a little before 3:30. This is a long, long drive, but I was finally ready to dig into the celebrated eastern North Carolina style of barbecue. There is a long tradition of whole hog cooking east of I-95 and north of Fayetteville. Parker’s is one of several very old restaurants in this part of the country. It was opened in 1946 by brothers Graham and Ralph Parker, and their cousin Henry Parker Brewer. It is no longer in family hands, but it’s in good hands all the same. Donald Williams started working here in 1963; he bought the business from Graham and Ralph upon their retirement in 1987, cousin Henry having already passed. Donald brought on two partners, Kevin Lamm and Eric Lippard, in the late 1990s.

Eastern North Carolina barbecue is distinguished from Western – which I consider a pretty inaccurate way of saying “west of I-95,” and not “the western third of the state” as geography might suggest – by cooking the whole hog with a gentle spice rub and not just the shoulders, and using a sauce that is often nothing more than cider vinegar. Some places add a little pepper or cayenne, but will often make a separate hot sauce available rather than bespoil the simple perfection of the bottle of vinegar.

Parker’s is incredibly, beautifully old-fashioned. The owners have made few compromises to modernity; the servers wear spotless white shirts and paper hats, and are lined up to greet guests as they arrive. They pounce; the next server was walking to meet me as I opened the door. I half-expected him to offer a handshake as he said “Sit anywhere you like. Do you know what you’re eating today, or would you like to see a menu?”

I have only visited Raleigh once, in the spring of 2000, and my friends and I had lunch then at a decades-old joint called Don Murray’s Barbecue and Seafood. It has since closed, sadly, but the atmosphere at Parker’s reminded me of that. White paper hats, wood paneling, delicious hush puppies, attentive service, and, of course, good barbecue. 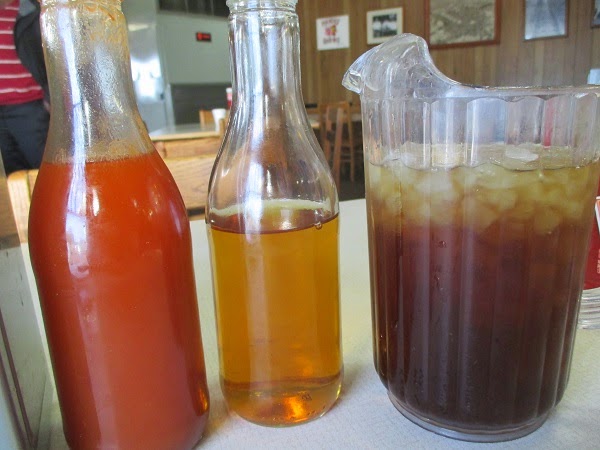 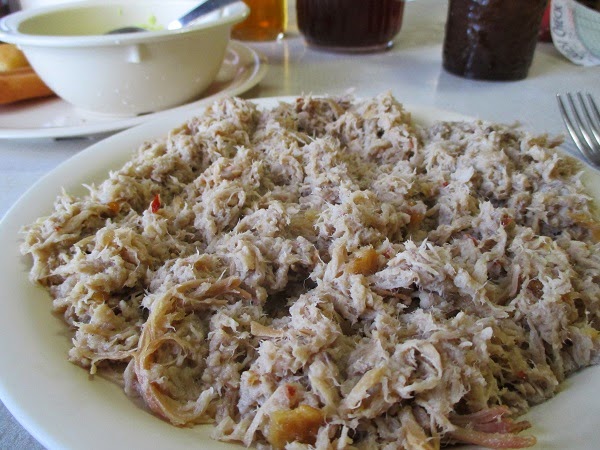 The meat is very tender and dry enough that I found that it needed a little vinegar. There’s a choice between a “dinner” and a “plate” here; the price is the same, but you can select either little more meat with one or more side options with the other. I had my pork with an order of completely awesome mustard slaw, which I love, and a mix of corn sticks and hushpuppies.

I didn’t order it here, but I was interested to see that Brunswick stew was on the menu here, and in several of the other places that I visited. Then I remembered that this region is only about an hour and change from southern Virginia, and that state has its own tradition of Brunswick stew, slightly unlike Georgia’s Brunswick stew. More on this in a couple of chapters. At any rate, take it as read that many of the eastern North Carolina barbecue restaurants will offer corn sticks, Brunswick stew, and boiled potatoes as sides, three things that you do not often find on the menu in barbecue places in the west. 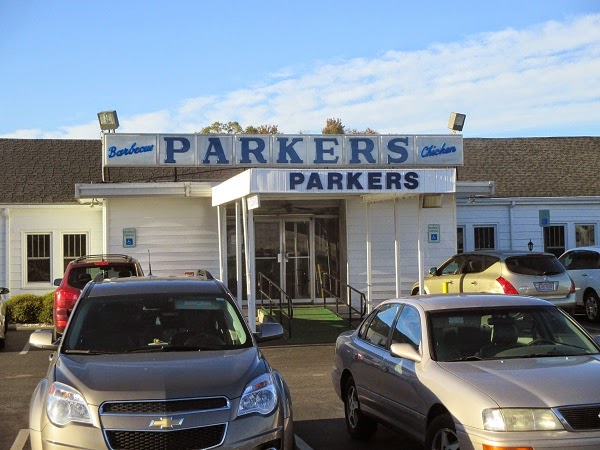 I was also very interested to learn that Parker’s no longer smokes their barbecue over wood. In fact, they served wood-smoked barbecue here for less than a decade, switching to gas at around the same time that they found their business booming from the arrival of a new Ralston-Purina plant that opened down the road in 1954. I couldn’t tell; I read the article in Our State on the wall after I finished my meal (it’s linked below) and scratched my head in some surprise.

Incidentally, there is a slightly different Parker’s Barbecue half an hour away in Greenville. It was opened by some of the Parkers’ relatives after Graham and Ralph sold the business in 1987, and it has two locations. The restaurant in Wilson is not affiliated with the two in Greenville, but they seem to maintain a cordial respect for each other. You never hear of any bad blood along the restaurant gossip line, anyway, which is nice. Barbecue’s too wonderful for anybody to be growling at each other.

So I thought this meal was very good, and I enjoyed it quite a bit, but there were even better meals to come. As related in the previous chapter, my spirits were low, but this barbecue and slaw elevated them completely and had me very optimistic about the next stop. This would prove to be an excellent trip.

Other blog posts about Parker’s Barbecue: