Cook Out has continued their slow and inexorable and honestly quite confusing expansion into Georgia. There’s no sense to be made in looking over their list of Georgia locations. I think that the presence of colleges must play a role, so that inebriated undergraduates can get a whole lot of greasy fast food at two in the morning and, what the heck, a milkshake while we’re here. That’s why we see restaurants in Athens (albeit nowhere sensible between the bars and the student housing, confounding that theory), Statesboro, Rome, and Milledgeville. But then there’s one in Pooler, and two stores in Augusta, and one in Atlanta off Moreland that serves the godawfulest barbecue ever. Two more Atlanta stores also opened last month, alongside this one, on Northside and in the former Zesto on Ponce.

The first “suburbs of Atlanta” store, which I think is the ninth of eleven, has opened alongside a World of Beer and a Marlow’s Tavern near KSU. Evening parking here has become nightmarish. We cut through one night recently to check out a report – we heard, correctly, that Chilito’s had closed – and found people parked on the medians and in the bank’s lot. Amid all this, Cook Out’s drive-through line looks like one of those half-remembered bad dreams of six dollar gas and every place to buy any shut down except for that one Exxon way out of the way where everybody else has gathered. The only sensible way in the world to visit this place is to do so at lunch. 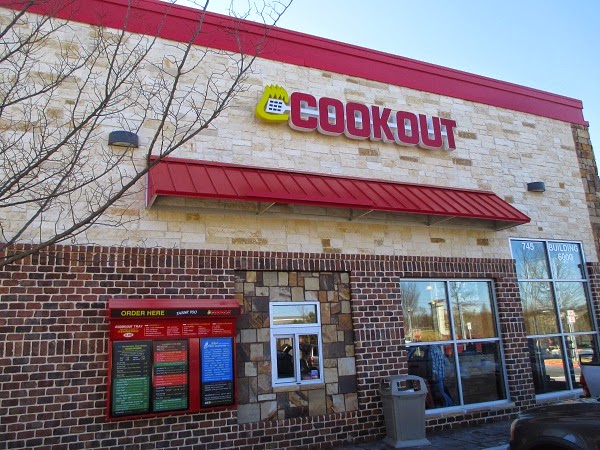 We had a meal at the one in Asheville many years ago and found it to be just low-priced fast food about on par with everybody else’s fast food. I took the kids to the new place for lunch one Saturday and we got a lot of food for under $20, and we all agreed that the fries were pretty good, although the burgers were, pleasantly, reminiscent of an old flavor. I remember being a kid in the late seventies and early eighties and really enjoying Wendy’s then; the burgers were far bigger and juicier than those awful dry things that they’ve served for decades, and I remember the ketchup and mayo oozing out over the tomatoes and onions. Cook Out burgers remind me of those. That’s part of their plan, I believe, to remind guests of the burgers of their childhood.

That said, the main reason to eat at a Cook Out is to get a milkshake. They have forty flavors and serve them far quicker than any of their corporate rivals. I enjoy many of their flavors, but there was one small fumble on this trip with us. The girlchild loves egg nog, and I thought that she’d like an egg nog shake, which they have as a special in December. She drank about a quarter of it and said “It’s too sweet, it gave me diabetes” and drank water after that.

I don’t think that we’ll order many more burgers here, as we just don’t eat fast food burgers very much, but milkshakes? Darn right. That orange push-up shake is worth skipping breakfast for. If the drive-through line isn’t too obnoxious, we’ll certainly visit again sometime soon for dessert.

4 thoughts on “Cook Out, Kennesaw GA”