As Atlanta-based burger chains start getting large enough to leave town, most of them head toward Nashville. Flip Burger Boutique, Yeah Burger, and Farm Burger have all put the Music City on their radars; in fact I believe that Flip just opened in Tennessee this week, or is about to. However, one of my favorites of that pack, Grindhouse Killer Burgers, is happily staying small and scrappy for the time being. Several months back, they chose to open their third location in nearby Athens, entering a very large space on Lumpkin near Five Points. I don’t recognize the building, and wonder whether it was built for this restaurant. It’s a two-story place with seating for a hundred downstairs and a hundred (21+) on the smoking-allowed patio upstairs. The three year-old complained mightily about not being allowed upstairs. Poor fellow.

Grindhouse’s shtick is fun design evoking terrible B-movies, and an endless loop of Japanese monsters and black-and-white mobsters committing violence and mayhem, projected on one of the walls. Somebody at the Athens location seemed to have misplaced the memo. What was playing when we stopped in? Short Circuit, a 1980s comedy starring Steve Guttenberg and a cute robot. When we took our table, I turned my back to it. 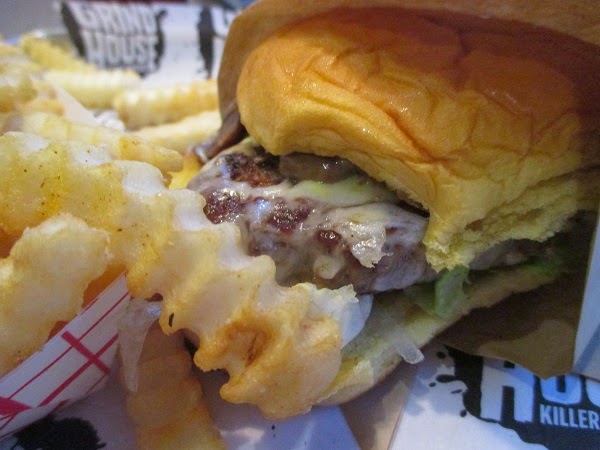 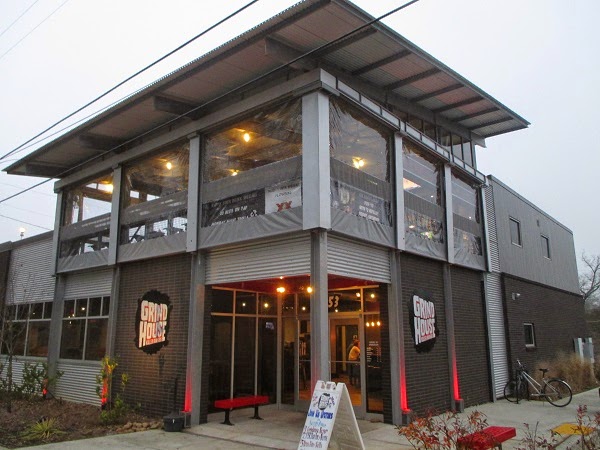 Marie had dinner earlier in the evening – we met a friend, again, at the Milledge Avenue Taco Stand, which we visited the last time we were in town – but I wanted to have something a little different, and had not enjoyed one of Grindhouse’s small and flavor-packed burgers in many months. I picked the Euro, which comes with Swiss cheese, mushrooms, lettuce, mustard, and mayo. The burgers are smaller than most of their competitors in the “better burger” market, but I also enjoy them more than most. The seasoning mix is very complex, and they taste just right. Grindhouse has often been praised for some of their slightly more offbeat creations, like the Hillbilly, with its oozing messes of pimento cheese and chili, and the Apache, with green chiles, but even when you order something comparatively straightforward like this, you’re guaranteed a good meal. 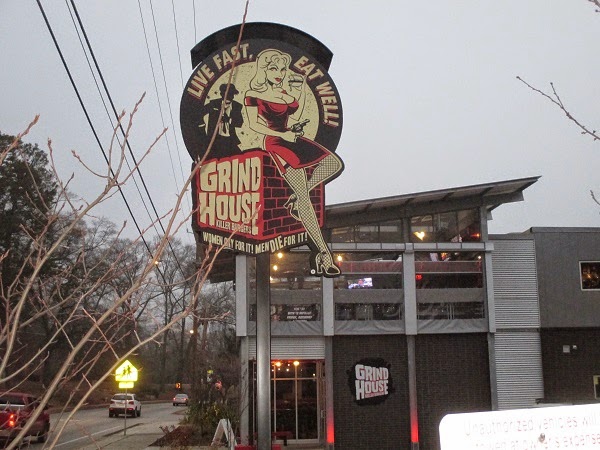 The other treat here would be the onion rings. They offer a huge half-and-half basket called “frings,” but seriously, unless you’re also giving a three year-old something to snack and he insists upon fries, you just need the onion rings. The batter is so tasty and greasy and awful for you, but you won’t want to stop eating these. A basket of these, a burger, and a tea will cost around twelve dollars, and for that kind of money I’d prefer not to have to look at Steve Guttenberg, but it’s a very fair price for such a great burger and rings. I am a little surprised that Grindhouse chose to open in always budget-conscious, coupon-mad Athens with their prices, but I suppose that their drink specials and patio keep the students happy. Maybe they even screen a better class of bad movie after the sun goes down.