For our final stop on this road trip, we visited one of the oldest restaurants in the southeast. Golden Rule Bar-B-Q is on at least its fourth set of owners, and the current home of its flagship store is, again, at least the fourth, but it traces its history back to 1891, when a family named Williams opened the original stop on the long Alabama to Birmingham highway. In the late 1930s, a gentleman named Jabo Stone, who had married into the Williams family, became the owner. He sold it in 1969 to Michael Matsos, and, in 2010, CM Foodservice, LLC took over Golden Rule as well as Matsos’s popular Michael’s Steakhouse. They run a few other small brands with locations dotted around the southeast, including La Paz, which, until recently, had a store within walking distance of my childhood home in Vinings GA.

Golden Rule has definitely had its ups and downs as it has tried to expand. For a couple of years in the early 2000s, there were two stores north up I-575, in Jasper and in Ellijay GA. Their website presently lists eight full-service locations in central Alabama along with a couple of conference center stops in Birmingham. There’s a notation for a Corinth MS store that’s “coming soon,” but I also found a real estate listing for a former Golden Rule in Corinth, asking price a million four.

A Golden Rule opened in Oxford MS in September 2013, around the same time as an Ezell’s Fish Camp. Both have since closed; at the time, Ezell’s was listed as another CM brand. It’s no longer listed on their company’s page. The only Ezell’s that I can find that are definitely still open are now called Ezell’s Catfish Cabin, with locations in Columbus GA and Bessemer AL. Anyway, it looks as though Golden Rule has expanded a few times and contracted again to its core area around Birmingham.

There was even a short-lived attachment to Mrs. Winner’s at one point. Now that’s how you dilute a brand’s power right there. 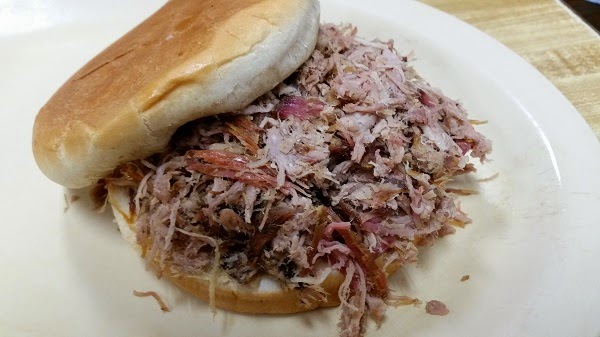 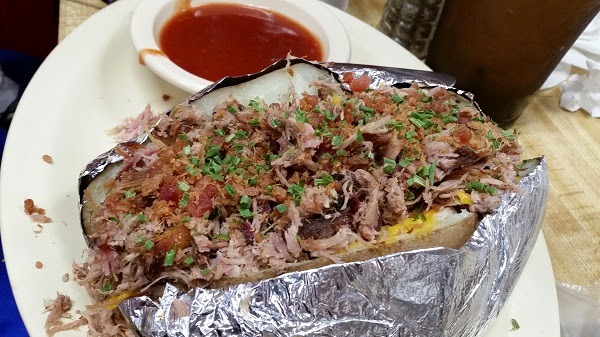 At the Irondale store, things seem to be caught in the 1960s, far from all this talk of brands and franchising companies. It has that distinct feel of a very old restaurant that invested in all the red-glazed brick that still lines the floor and the walls, and which was popular for a few years before becoming lost in time. After decades, there’s an indefinable aura about this place, the same vibe that I get at The Beacon in Spartanburg SC. Apologies, that’s very nebulous, but there’s something that hangs in both restaurants’ atmosphere, probably trapped in the glazed brick, and gives me a pleasant smile.

Marie and our son shared a gigantic slice of pie, since they were satisfied with their lunch at Gus’s Hot Dogs earlier. The girlchild, who skipped lunch there, enjoyed a baked potato topped with chopped pork, and I had a chopped pork sandwich. The meat was smoky and dry, and kind of needed a little sauce. The house sauce is tomato-based with a little vinegar, but they also offer a white sauce as well. I split my meat down the middle and went half and half with each sauce. To me, it tastes about average for chopped pork in Alabama. I’ve visited several places here and there that I’ve enjoyed more, but this was a perfectly fine little stop. 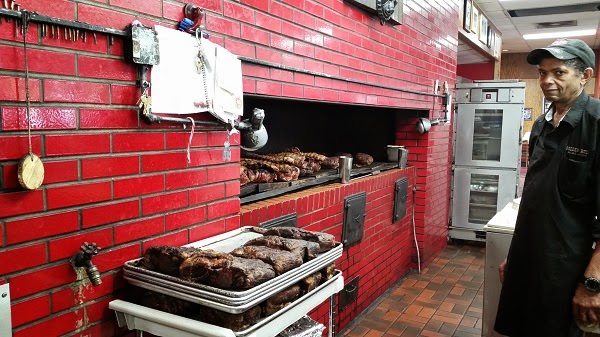 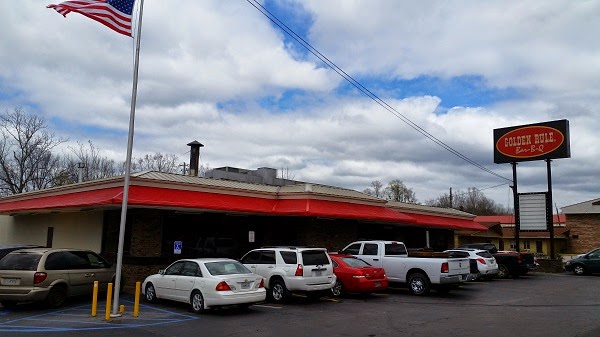 I love the huge indoor fire pit. You just don’t see this often enough around Atlanta, but lots of places around Alabama have them. Golden Rule has a nice, big one. It smells terrific in here, and tastes pretty good, too.

We were pleased with the food and the service and the prices, and think it’s a shame that they’ve had so many stumbles trying to grow. So perhaps they should quit, rather than fumbling around with franchises in Ellijay and Oxford and Mrs. Winner’s. The very best barbecue places – all of them – have a single location where the quality can be scrutinized at all hours. This place is good enough, and old enough, to warrant a visit.