I love it whenever I get to visit a restaurant and have a preconceived notion dropped on its head. A few weeks ago, I was invited to sample a lunch at Kabob Land, which is in Atlanta’s Buckhead neighborhood, on Piedmont just below its intersection with Peachtree. I looked forward to visiting, but I think that the colorful, Saturday-morning-cartoon logo that the restaurant employs actually hides just how good the food is. I always try to visit every restaurant that we try with an open mind and a kind heart, but wacky lettering sort of gets in the way of seriously good food. 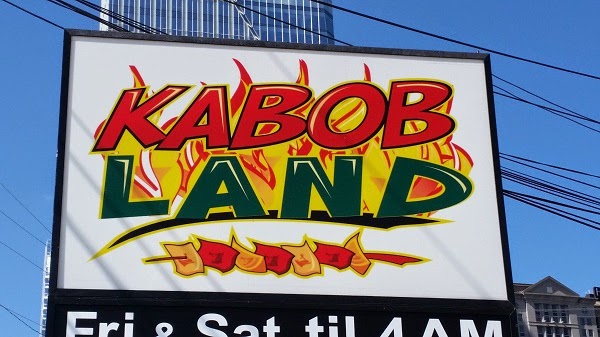 Marie was not able to get away to join me, but since a guest was also invited, I asked my old friend David, who works not many miles away, to join us. David probably enjoys Mediterranean food even more than I do, and has visited quite a few more restaurants that serve food from that region than I have, and we left incredibly impressed, believing this is among the very best in the city.

Kabob Land, which opened last year, occupies one-quarter of a deep red and yellow building next to the venerable old Wolf Camera on Piedmont. The other three-quarters of the building, and the patio, is taken by the second location of Red Pepper Taqueria, which gets a pretty huge Friday crowd.

Last month, I wrote about Ameer’s Mediterranean Grill, and mentioned that someone once suggested that an appetizer sampler is a good way to get an idea of what the kitchen can do. It was in fact my friend David who had suggested that, and so I was doubly pleased when Chef Matt Iyibas, originally from Turkey and with several years’ experience in restaurants in the US, including the wonderful Rumi’s Kitchen in Sandy Springs, told us that he’d bring us a mezze platter to share. 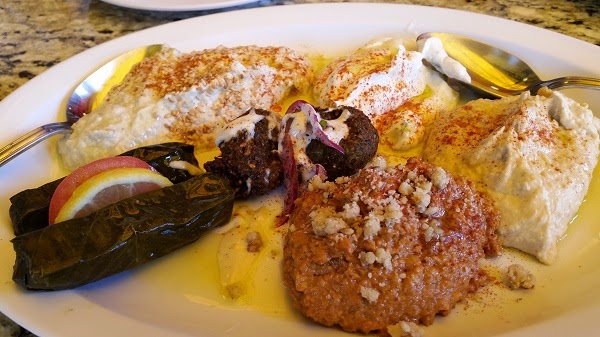 With apologies for the lighting under the patio’s tarp changing the color of everything, this included hummus, a yogurt called maast-o khiar, baba ghanoush, grape leaves, falafel, and a downright amazing find. That dark red dip that you see above is called muhammara, and it is wonderful. It’s made with walnuts and aleppo peppers, with pomegranate paste and breadcrumbs. The dish is said to hail from the old Syrian town of Aleppo, and why I have never had this before, I don’t know. It’s maddening. Have I ever seen this on a menu and just not investigated it? I love it enormously. I want to have this again, soon. 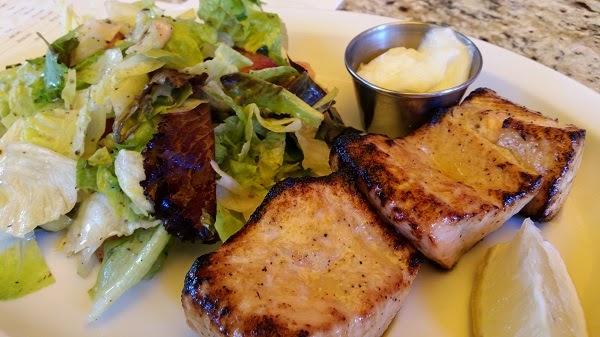 Chef Matt recommended the salmon kabob and the lamb kabob, so we went with those. The salmon was simply delicious, cooked perfectly with just a hint of blackening. It was tender, flaky and seasoned really well. 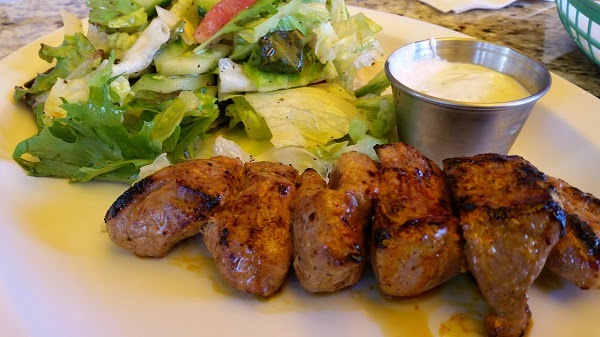 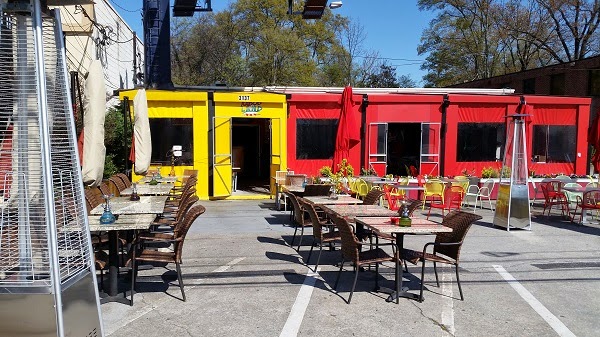 The lamb was every bit as good, too. We enjoyed all of the food. There’s a complexity to the seasoning and the prep that belies the fast casual nature of the restaurant. Going back to what I said about preconceived notions, I expected one level of quality, and was sure this would be pretty good, but I wasn’t expecting one of the very best Mediterranean restaurants in town to be hiding behind the silly logo and the long ordering line. The prices are pretty reasonable, with plates ranging from $8-14, and that that lovely muhammara going for $7 a bowl. We’ll definitely get back over here again, and soon.