I was very happy to visit Dave’s Philly in, heh, “Dorawoodyville” last month and enjoy a really terrific cheesesteak, because honestly, the quality of these sandwiches in Atlanta has slipped. It was great to have a sandwich that was every bit as good as the best that I’ve had previously.

Six years ago, Roy’s in Smyrna briefly became the standard-bearer. It was started by Roy Brostrand, who, back in 1984, founded The Philly Connection chain. After twenty-plus years with the company, he moved on and opened Roy’s, and, in late 2011, also started a food truck called Champion Cheesesteaks. Eventually, his former team at Philly Connection concluded that they needed him back, and fast, and so they made him an offer he couldn’t refuse to return. Champion trucks got rewrapped with the Philly banner, and he sold Roy’s.

Roy’s is still pretty good, but what used to be a standout meal has tapered off. We ate there probably a dozen times between 2009 and 2013 before we got out of the habit. This led to a funny conversation with my daughter about six months ago when we had business in the area. We drove past the storefront and she said “We never go to Roy’s anymore. Can we have lunch here sometime?” I shrugged and said “I dunno, this is kind of a long drive for lunch…” She immediately bellowed “WE GO TO OTHER STATES FOR LUNCH!” We were back in ten days, and their soda fountain was out of Fanta Birch Beer.

Fanta Birch Beer, incidentally, is the very best soda that the Coca-Cola Company makes. By miles. If you own a restaurant, tell your soda jerk that you want it, and not Coke Zero.

Then there’s the Mad Italian, and holy anna, has that place’s cheesesteak fallen apart. I don’t believe that anybody who names it one of the Atlanta area’s best has actually ordered one in at least six years. Earlier in the summer, we met a couple of our blogging friends Leslie (from The Food and Me) and Marilyn (from Atlanta etc.) for dinner here, and they served me this all-bread thing that had about as much meat as a vegan’s willing to consume, and what little there was tasted like one of those frozen “Steak-Ummms” from the 1980s. I thought about writing a “take two” post about our dinner, but when an old restaurant gets coasting down that long hill to extinction, it’s best not to look too closely at the carnage. At least Marilyn enjoyed her meatball parm that night.

So when Brad Kaplan at Creative Loafing said that he’d followed a tip out to the northeastern ‘burbs and found the real deal, I said that I sure hoped so and, the next Saturday that Marie had to work, the boychild and I picked her up and we drove over here. 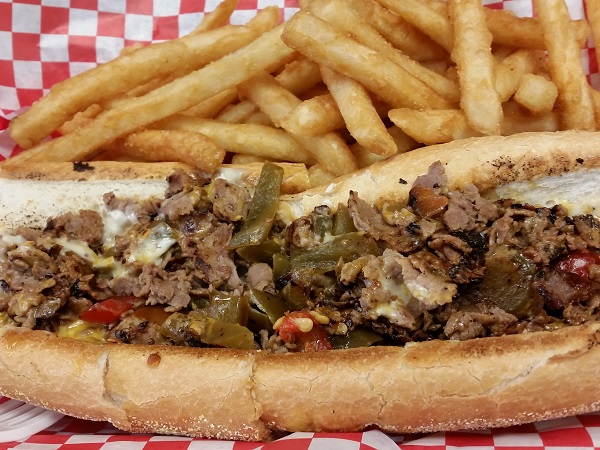 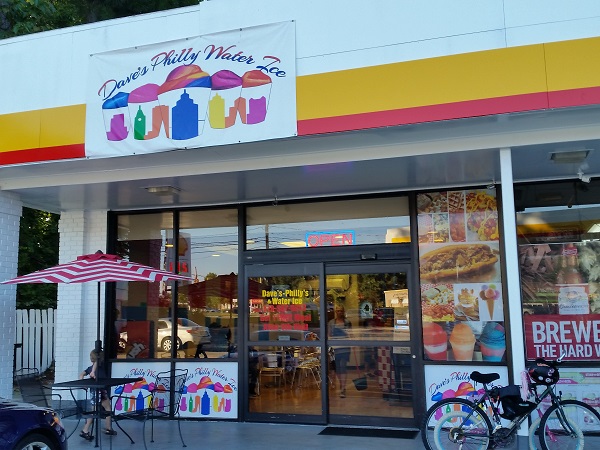 We met our friends Helen and Vincent at the tiny little place. There’s seating for maybe a dozen people inside and a couple of tables outside. It’s in the space next to a Shell gas station on Winter Chapel Road. The owner, Derrick Hayes, named the restaurant in honor of his late father. Hayes grew up in Philadelphia and makes his sandwiches the traditional way, on Amoroso rolls, with a blend of cheese whiz, white American, and Provolone.

The result is an incredibly good cheesesteak, every bit as good as Roy’s at his old best, and better than the Mad Italian ever was. All four of us were really impressed by our sandwiches. They’re huge, and incredibly filling. You can really taste the quality. Marie said this was the best cheesesteak she’d had in years.

Plus. we came at the right time, because Derrick was experimenting with a brisket Philly and asked for our opinions. Helen and I suggested that the brisket could stand to be cut a little thinner, but it was nevertheless very flavorful. He’s onto something very, very promising here. I have a tendency to fear for the worst with restaurants attached to gas stations, having seen so many collapse and close pretty quickly, but this place deserves attention and I hope it sticks around and grows.