We have a crowded schedule at the best of times, and November and December are just about the worst of times, so we made sure to get over to the Brickery Grill and Bar for what will probably be our last supper there a few weeks ago. After a quarter of a century, the Sandy Springs institution will be shutting its doors in a few weeks. Developers have bought the dying strip mall where the restaurant currently resides and will soon be erecting some gigantic thing or other, apparently because the traffic at Roswell Road, Hildebrandt, Hammond, Mount Vernon and Johnson Ferry isn’t terrible enough already.

I don’t have many regrets in life, but I do wish that I learned about this place a whole lot earlier than I did. Marie joined a group of bloggers for a media event here last spring, came home raving about the shrimp and the onion rings, and we’ve made several other trips here since, often in the company of some other hobbyists. The Caesar Burger is a top 5 burger if ever there was one, a great spectacular mess of dressing and cheese, requiring either a knife and fork, or ten to twelve napkins. If you haven’t had the pleasure, and especially if you think you already know the best burgers in the Atlanta area, you need to get over here before the doors close. You’ve got about four weeks.

News of the Brickery’s closing broke in late July. Bruce Alterman, who opened the place with his wife Sally, told me then that there was only about a 50% chance that they’d be able to make the deal on a relocation. Perhaps one day the Brickery will reopen, but that’s not presently in the cards, which is a downright shame. 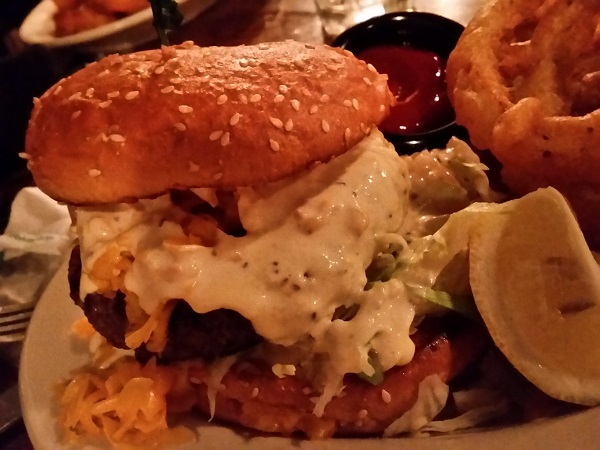 I dropped our friend Marilyn, who writes Atlanta etc. (link below) a line and asked her to join us. Marilyn passed on the Caesar Burger in favor of the brisket and the kugel, but she enjoyed the heck out of those, so it was all good. She also ordered the big ol’ plate of homemade chips with blue cheese for the table. I only had a couple of those; my schedule forced me into a later-than-ideal lunch and I didn’t want to stuff myself too full before digging into the Caesar Burger. Her son enjoyed the fried chicken. When this place closes, not only are we going to lose one of the best burgers in town, but also some of the best chicken. There’s a whole lot that’s not right about this.

Bruce and Sally have not announced their closing date yet, but it is coming up soon. If you’ve visited their restaurant before, you’re going to want to get in there one more time (at least) for a farewell meal, and if you’ve not had the pleasure, do not let them close before having a Caesar Burger. You will regret having lived in Atlanta and missed this iconic place the same way that I regret never having visited Frijolero’s. Heck, I wish I’d known about this place sooner!!

Other blog posts about The Brickery: