I’d been hoping for several weeks to get a chance to visit Tin Can Fish House and Oyster Bar, as several of the region’s food writers have been raving about it. This past Saturday, Marie wanted to visit a maternity consignment shop in Buckhead. It was a really gorgeous and warm day – far too warm for it to really be February! – and so the two of us left the children to their own devices and drove over to Sandy Springs for an early lunch. We arrived a little too early, as it turned out – they do not open until 11.30 – and so that gave us twenty minutes to walk around the curious strip mall where the restaurant is located. The development is centered around a Kroger, but rather than a conventional strip, it’s four or five short two-story buildings, all hidden above and behind Roswell Road and Hammond. It’s really not that easy to find; basically, if you are standing at the entrance to Kroger, then Tin Can is ahead of you and to the right, next door to their older sister restaurant, Teela Taquiera.

Interestingly, it appears that the spot was previously taken by the same brother and sister ownership team’s Italian restaurant, but back in September, they elected to convert it to a seafood place. They had previously run a seafood restaurant called Fishmonger in the same area of town. I never tried it, but it was said to be pretty good. I read an article over at the Atlanta Business Chronicle where co-owner Arte Antoniades said that our area was lacking in casual, relaxed places to get good seafood. I’d agree with that. It’s all big-roomed family places full of long waits and screaming kids or high-end joints.

The closest that I can recall of a simple, no-wait place for great, reasonably-priced seafood was Blue Ocean in Alpharetta. Unfortunately, they chose to build on Windward Parkway and were part of that gigantic and regular restaurant turnover that I mentioned in this blog earlier in the month. 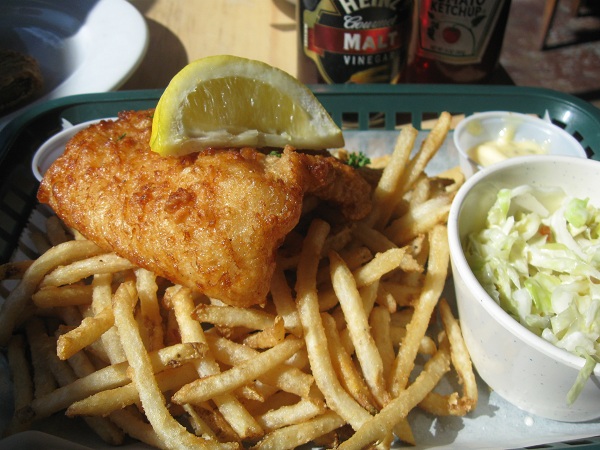 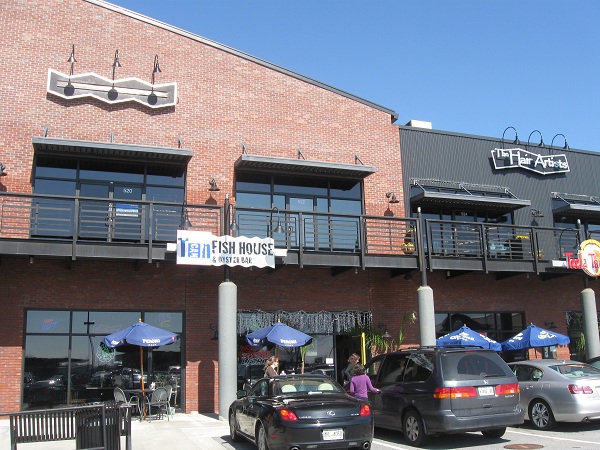 Tin Can certainly has the casual and relaxed part down pat. Despite the trappings of the very nice strip mall, this is a really laid-back and friendly place. Marie picked a table by the window – we missed a trick not going outside, but then again it was awfully bright – with a wobbly bit on the floor that no chair would evenly sit. She ordered grilled grouper with a salad and saffron rice. The salad was excellent – mixed greens with tomatoes, figs and walnuts in a light balsamic dressing, although the rice was a little saltier than she liked.

The grouper itself was really tasty, but I preferred my selection. I had the standard cod and fries with slaw, and if there’s a better seafood meal around town for nine bucks, I never heard of it. The cod was flaky and delicate and just wonderful. The shoestring fries were almost just right; they could have used a hair of the salt from Marie’s rice. The slaw was really good, with just the right blend of vinegar and thin mayo. I also ordered a side of fried green tomatoes, unsurprisingly. A side order comes with three slices and a small cup of spicy remoulade.

Honestly, the cod and grouper were as good as any I’ve had, and for a little bit less than I’m used to spending. It’s a hair more of a drive from our neighborhood than would be ideal, but it’s certainly worth another visit the next time we are in the area. And relaxing with some good food like this put me in a much better mood than I had been, just in time to spend the next hour or so thumbing through baby clothes. See, told you I’d be diverting some of our disposable income and dining money on clothes for the kid. I’m not a complete beast.

Other blog posts about Tin Can:

One thought on “Tin Can Fish House and Oyster Bar, Sandy Springs GA”