This is Marie, contributing an entry about Jot Em Down, a BBQ place I have a particular fondness for more for sentimental reasons than anything else. My most recent visit to Athens was a mom’s day out with friends, and the baby and I made a trip without Grant. I decided to eat at a place that used to be fairly frequently in rotation when Grant used to come up to Athens on the weekends. I had meant to go with him when I collected the place for the blog, but we have so many new places to try out and I am the one who likes to revisit old haunts, so this trip seemed the most sensible opportunity.

Jot Em Down, when I first encountered them on a dinner date with Grant, was called Jot Em Down Country Store and Bar-B-Q, and it was a peculiar mix of restaurant, junk collection, and convenience store, all housed in a very old and small building on Whitehall that used to be a house. The building was put up somewhere around 1924 when electrification was still a new-fangled thing. The business actually started as a country grocery store, and when we first went there it still had shelves of Sunbeam bread and canned sausages, along with a selection of home-canned pickles and such in glass jars. For a place that had only been a restaurant for a couple of years when I first encountered it, it sure did manage to have that look of a “been here forever” sort of spot. The barbecue place started when the store was purchased from the family that used to run the old store, and they kept up the tradition until the move to the new location. They took over the restaurant on the Macon Highway that had been Parsons Restaurant for many years, and kept Parsons’ neon sign on the building’s front.

When they were on Whitehall, it used to be a challenge to find a parking spot on a rainy day because the gravel was a rather scanty truckload spread over a large collection of wheel-eating potholes, but inside the building there was an amusing collection of stuff spread over the walls and shelves. Yes, most barbeque places have old license plates and rusty advertising placards and way too many ancient soda bottles and oddities like dolls in a birdcage, but this was my first one and I was still going to yard sales on weekends at the time, so my eye didn’t pass over the decorations as they tend to do now. It does make a difference if the signs are for defunct local businesses rather than whatever came in the delivery box. 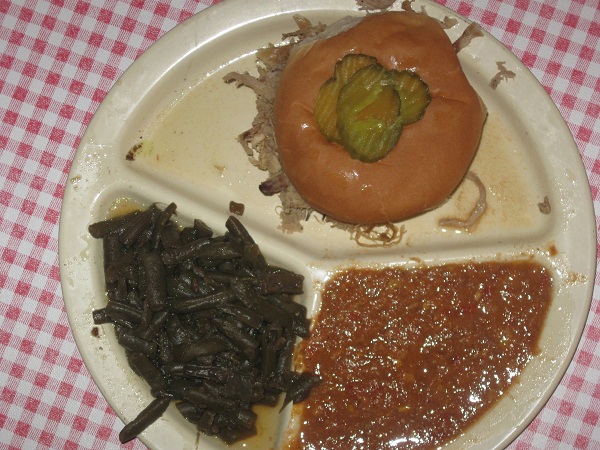 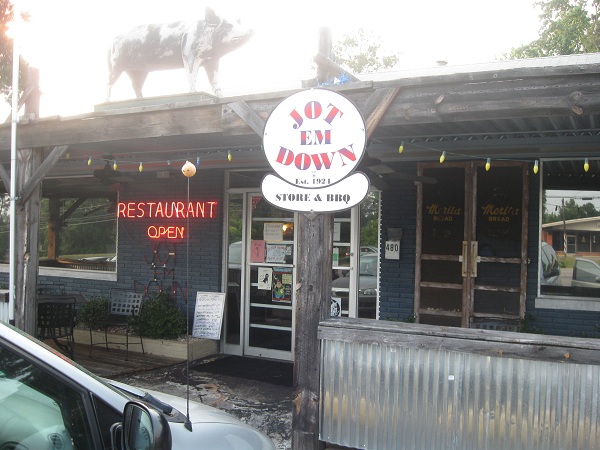 Despite the abysmal parking situation and the fact that the interior could only hold about four tables, Jot Em Down just had a good feel to it. It was a place just odd enough to make you step out of your flow, while not actually being creepy or anything. Due to an unfortunate lack of battery power on the camera, only the less charming new location is in the photos. Interestingly enough, though I didn’t know it at the time, the store used to carry preserves from Hillside Orchard Farms, which was written up earlier in this blog.

The food in the new location is the same, except that I have not seen the smoked quail that used to be available (in season) at the old Whitehall location. Even some of the old decorations were repurposed, though they are spread a whole lot thinner as the new location has a proper parking lot that will allow people to fill in the much more generous collection of tables. Honestly the new location still has a degree of charm to it, but in comparison it’s rather tame. They still have a small remnant of the old convenience store vibe as they have used the old candy/snack cake rack as their dessert options, and they still carry sodas in glass bottles. Small-market ones, to boot; who wouldn’t want a Cheerwine or RC Cola with their meal?

They have seven different sauces including vinegar, mustard, several varieties of red sauce, and a scary green hot sauce I haven’t tried. Grant has been grumbling about these sauces for years, saying that they really should invest in some laminated labels for the squeeze bottles instead of just writing the names with a black marker. The meat is nicely smoky and just dry enough to soak up sauce without being too dry. The sides are OK; I am generally happy enough getting just a sandwich.

Other blog posts about Jot Em Down: