A few Fridays back, Marie and I found ourselves with just the baby. Our daughter had found a jawdropping sale on clothes at Plato’s Closet and I had made her an offer that she couldn’t refuse. If I forwarded her the next month’s clothing allowance so she could fill a bag and save something ridiculous like – no joke – 75%, then she could fend for herself for supper and Marie and I could enjoy some grownup time. The baby just sleeps at restaurants – long may that continue – so we could mostly get a break from kids.

Marie was in the mood for a sandwich, so I suggested that we give Papi’s a try. I had only been to this location once, right when it opened, and figured it was due a second glance. I did not know it at the time, but this is actually a small group of four restaurants, with one in midtown and three in the suburbs. They have daily specials and interesting entrees, but where they are said to excel the most is in their sandwiches. 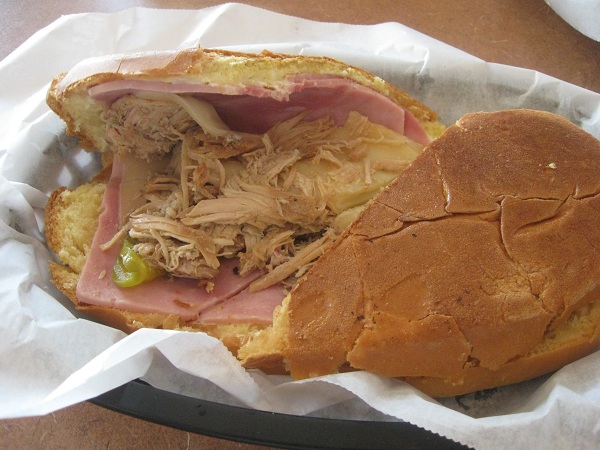 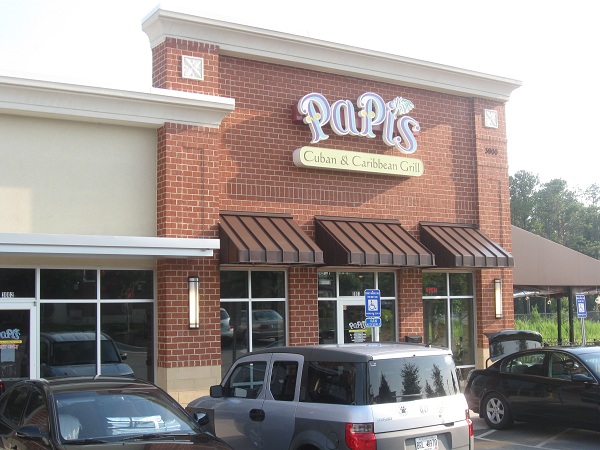 We got to Papi’s just as the dinner rush was about to get heavy, and this apparently coincides with their closing a few tables to make space for a band in the second dining room. We did not have to wait, but quite a few other people arriving after us did. This is a very popular place on Friday evenings!

My readers who enjoy unusual sodas should certainly swing by one of Papi’s locations and check out the drinks on offer. They had quite a few cans of things that you very rarely see, including my beloved Ironbeer. A Cuban soft drink goes extremely well with a good Cuban sandwich.

In my mind, a Cuban sandwich is defined by its very good, slightly sweet bread, meats, lots of mayo and pickles. Marie had the medianoche sandwich with smoked pork and ham, and I had jerk chicken, and we both really enjoyed them. We were a little let down by the fries, which tasted rather too much like institutional mass-produced fries, and fried in the same grease used for the fish. Next time, we’ll have a different side. There certainly will be a next time. While perhaps not quite as tasty as the relocated-to-Birmingham Kool Korner, the sandwiches are still very good, and the atmosphere is fun and upbeat. I’d like to go again one day and enjoy the live music, and an Ironbeer.

Other blog posts about Papi’s: