Growing up, I remember a restaurant on the Marietta Square called Jimmy the Greek. At the time, I was aware that CBS Sports had a commentator who went by that name. It’s not like ten or eleven year-olds pay that much attention to who provides commentary and picks before the games or the fights, but Jimmy “The Greek” Snyder (born, according to Wikipedia, Dimetrios Georgios Synodinos in Steubenville, Ohio in 1918) was so well-known that, like his peer at ABC, Howard Cosell, he was parodied on many of the sitcoms, variety shows and Saturday morning programs that I watched as a kid. And, as a kid, using child-logic, I concluded that the real Jimmy the Greek must have not only owned the restaurant by that name in Marietta, but also greeted guests and cooked all the food. I vaguely recall being disappointed to learn that was not the case. I really wanted to meet another celebrity. By the age of eleven, I think the only celebrities that I had ever met were behind tables at car shows.

No, the real Jimmy the Greek restaurant was run by Jimmy Duvlaris, who still owns the building on Roswell Street. That restaurant closed a long time ago, but for the last two years, the space has been taken by the Starlight Cafe, a breakfast and burger joint that pays tribute to Mr. Duvlaris by naming its signature burger after him. The Starlight Cafe’s owner, Jody Wilson, dropped me a line in March and encouraged me to stop by. I did not actually try the Juicy Jimmy on my first visit, a decision that prompted no end of kicking myself, but instead had a different and terrific burger, the Cowboy Melt. This is sort of an amped-up patty melt, with barbecue sauce and onion rings on Texas toast, and it is really great. 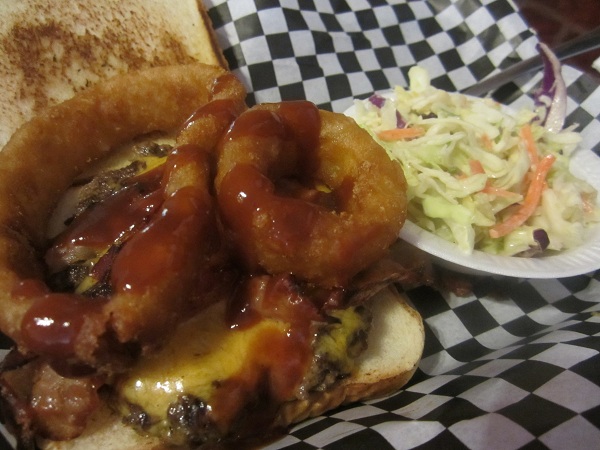 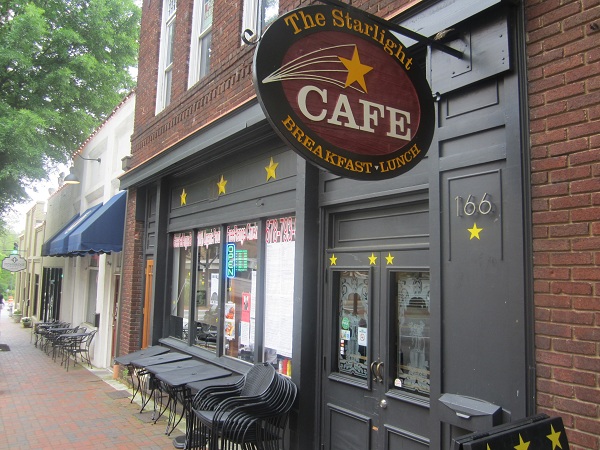 It wasn’t until I had ordered and sat down that I remembered that I might have really enjoyed the Juicy Jimmy, had I given it the chance. I read an article about Wilson and his restaurant on the wall before my burger was ready – you can read it as well – and suddenly remembered a chapter in John T. Edge’s Hamburger & Fries about Juicy Lucys. If you don’t own this book and you like burgers, you need to go buy a copy. It’s a very lighthearted and fun look at many of the regional varieties of hamburgers around the country. Juicy Lucys are occasionally found in Minnesota and Wisconsin, and have their two patties stuffed with cheese as they’re grilled, the patties sealed around the melting goo in a real-world example of what Edge, sensibly, terms “fluid dynamics.” They’re spelled “Jucy Lucys” at Matt’s, the Minneapolis barroom where they were first concocted in the 1950s. The cute, regional style is mostly unknown outside of the upper midwest, although I have heard that a newly-opened restaurant up the road in Athens started doing them as their specialty last year.

So, with Marie and the baby in tow, I made a return trip to the Starlight a week later to try one. Inconveniently, it is only open for breakfast and for lunch, making it difficult to get here along with her, but we really enjoyed our burgers. Marie said that her basic cheeseburger was among the better ones that she’s had in a while, and the Juicy Jimmy was every bit as fun and sloppy as I hoped. There was a little more meat than I was prepared to dig into – I know that it may seem like Marie and I are constantly eating, but we often share meals and rarely finish them – and a half-pound of beef was just a little too much for me.

Whether guests want their burgers stuffed with volcanic eruptions of hot, cheesy goo or something more traditional, they’re assured of something quite good. Like all of the intown joints that get all the press and attention, the Starlight uses grass-fed beef from a local source. I agree with Marie, and honestly find these to be on par with the offerings at Farm Burger; that is to say, these are really good and worth showing off to your foodie friends.

One final note before moving on: since I recently, unwittingly, angered the proprietor of a Kennesaw pizza place by daring to point out that, rather than using actual artifacts from the 1960s and 1970s to decorate his hippie-themed joint, he just bought a few dorm room-quality posters of Hendrix from the FYE at the mall when he opened, it would be churlish to not put Mr. Wilson through the same wringer. Toward the back of the dining room, there is a quite awesome Frank Sinatra tribute, with several news clippings and articles from papers and magazines. I don’t know how to describe how neat this is. The simple brick interior is brightened by a few dozen celebrity glossies from the 1950s, and Rat Pack music playing overhead, but the time it took to assemble that Sinatra tribute is impressive, and I was pleased to see it. Hopefully, Mr. Wilson is lighthearted like us and has the sense of humor necessary to enjoy my silly and entirely unserious banter when I write this blog, and won’t have a small internet meltdown and commit online seppuku like his peer in Kennesaw did when I point out, however, that the photograph of Barbara Eden is ten years out of period with the rest of the decor. I mean, anachronisms like that just send folk to the fainting couch.

After finishing my lunch at Starlight, I walked up a few storefronts to Miss Mamie’s. This shop got some nationwide fame a short time ago when it won a season of Cupcake Wars, one of many deeply silly programs on the Food Network, but, hey, “silly” doesn’t enter into it when you’ve got the chance to shine in front of several hundred thousand cable TV viewers. Mamie Jo Doyle is only in her twenties, but she bakes up a pretty good cake. She graduated from Le Cordon Bleu Atlanta in 2009, interned at the bakery that was previously in this spot, and bought it shortly afterward. 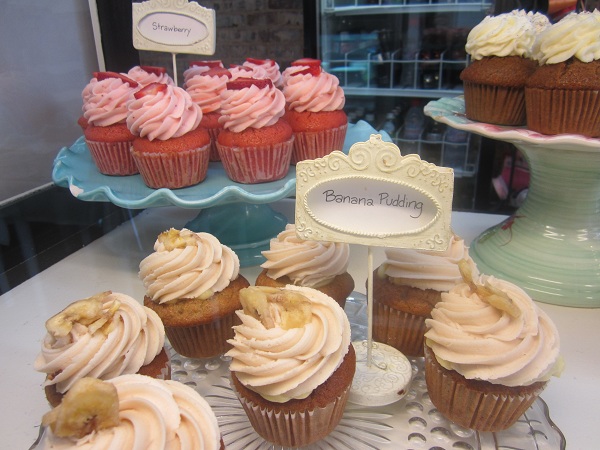 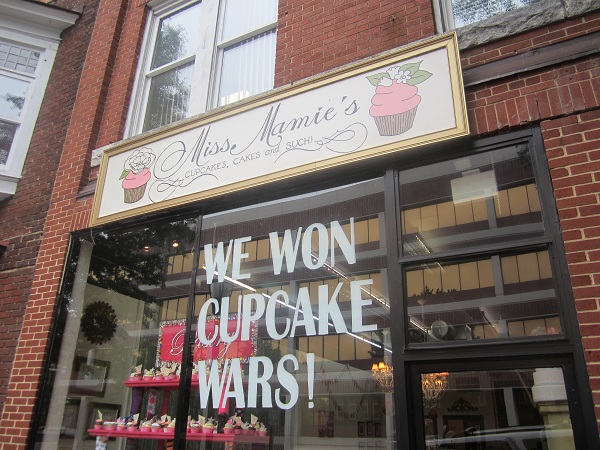 If Marie and I were actually doing formal restaurant reviews, rather than sharing bits of happiness and fun, then I would have ordered more than just one cupcake. But as this was just a whim that I enjoyed and wished to share, I just want to let you all know that I had a single banana pudding cake and that it was completely delicious. I mean, I like Gigi’s okay, but their flavors are so fleeting. This really lingered in the most welcome and pleasant way. I only got the briefest exchange of hellos with Ms. Doyle, but the other two staffers were upbeat and helpful to the point of effervescence. It’s totally fair to call this place completely charming, and providing a fine dessert to a good burger from Starlight.

Other blog posts about Miss Mamie’s: