I’m starting to think that we’ve exhausted the possibilities of good eating in Acworth, the not-at-all cosmopolitan neighbor to the north of Kennesaw. There doesn’t seem to be a lot left that sounds interesting, and what we do see are places like the Acworth Fish Camp, which means well, and provides very good service to a very large crowd, but otherwise disappoints me. As we usually encourage local businesses, and applaud the ones like, in the previous chapter, Leon’s Full Service, who get so much of their food and drink from local farmers and breweries, the Fish Camp is an ugly and unfashionable throwback, with an archaic business model. It needs retiring.

Marie and I agreed to let the teenage girlchild “hang out” with a cute boy of her acquaintance at a library roughly between our place and his for a little time, while she and I discreetly chaperoned. The Fish Camp was not far, and, after we left US-41, the road took us through a meandering series of narrow streets with old houses and mobile homes before ending in a small marina. The Acworth Fish Camp is apparently the latest in a series of restaurants to set up in this space, overlooking Allatoona Lake and its boat ramps, and opened three years ago. There is some indoor seating, but most of the large crowd sets up on the back patio, enjoying the view of the lake and large boats speeding through.

It’s a very pretty location for a very old and industrial building. The lake, a reservoir, was constructed in the late 1940s by the US Army Corps of Engineers, flooding the former town of Allatoona forever underwater. It is visited by more people every year than any other Corps of Engineers project or park. Lacking any other dinner options after a day on the lake, dozens of boaters make their way up the hill to the Fish Camp. If they’ve spent the day with a rod and reel themselves, they might have caught, according to the military, bass (largemouth, hybrid, stripped, spotted, and white), crappie, bream (bluegill, redbreast and redear sunfish), gar and catfish. Admittedly, I don’t think that anybody on the planet wants to eat gar if anything, anywhere, is available instead.

Not found in Allatoona: swai, tilapia, mahi-mahi. And yet they are all on the menu here. Bass, catfish and bream are not. 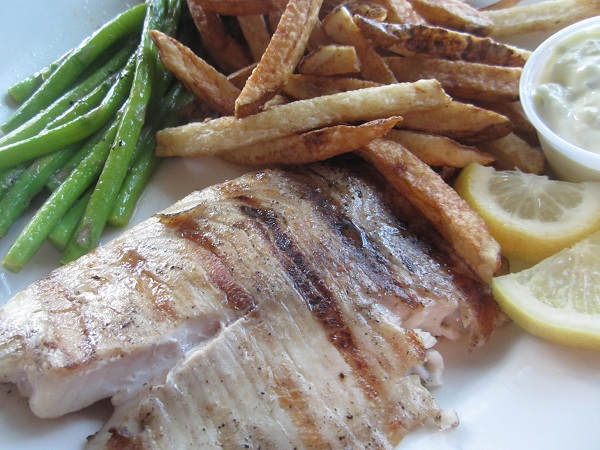 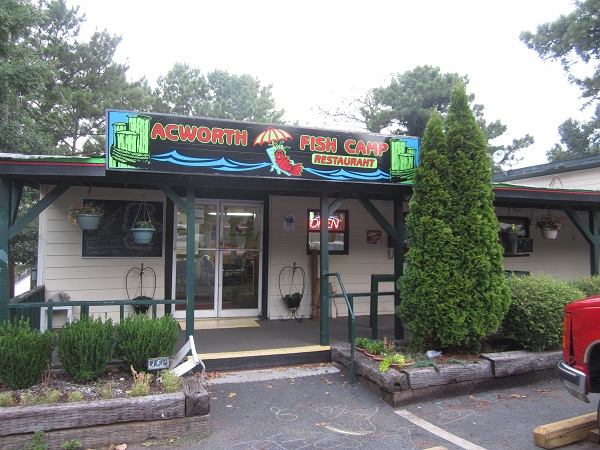 Some years ago, I spoke up and sounded like an apologist for the thunderously popular Original Oyster House in Mobile, Alabama. In the early 2000s, one of their suppliers had been busted selling a Vietnamese catfish-thing called sutchi after telling its restaurants for months and months that it was grouper. The problem was that the Oyster House’s customers – including me – really loved the taste of the turned-out-not-to-be-grouper, and so the restaurant did the right thing and kept it on the menu, correctly identified as sutchi. It turns out that this really is a wide-ranging issue in the business. A 2010 Congressional Research Service paper, Seafood Marketing: Combating Fraud and Deception (PDF), by Eugene H. Buck, looks into this problem.

It’s probably thanks to increased knowledge about this issue that we see swai on the menu. Since people have a right to know what they are paying for and putting in their bodies, suppliers and restaurants have been much more vigilant over the last few years in making sure these things are correctly identified. Since the differences in flavors between fish species are often very subtle, people who, like us, don’t eat it regularly could very easily be fooled into thinking the fried filet that I ordered was cod or whitefish or something. Swai is a very close cousin of sutchi, only without any detectable flavor whatever. Doing a little research, I see that swai is marketed as being “mild.” That’s the understatement of the year right there. I ordered a basket of that with some homemade chips. The chips were excellent.

Marie ordered the grilled tilapia and the baby ate about half of hers. Similarly, she was impressed with the sides, including some very good hand-cut fries and very tasty asparagus served with a light drizzle of a lemon pepper sauce. Her tilapia was pretty good, and my swai was certainly not bad, it was just so inoffensive that, dipped in tartar sauce, it tasted exactly like tartar sauce.

But I am bothered by all these foreign fishes on the menu with the lake right there. I believe that we should be striving for at least the ideal of sustainability. I understand that a restaurant may not be able to bank on sales from local fishermen for the regular menu, but I also know that there are fish camps on Georgia’s coast that do exactly that. I would love it if they would line up some local sales for specials in the evening. For my money, a filet of freshly-caught largemouth from down in the pond below me sounds much more invigorating than a blackened freshwater shark all the way from the Mekong.

I guess that’s my problem with the Acworth Fish Camp. It could, and should, be something unique and exciting, which works with local fishermen – observing the strict rules about how much one may land in an afternoon, of course – in arranging its daily specials. Instead, quality-wise, it’s not all that different from Bay Breeze or any other everything-is-fried seafood barn. It is what it is, no better and no worse than any other seafood place for miles around. It’s just that the view is better. But then the view gets you thinking about what you’re not eating.