This is Marie, contributing an article about Bay Breeze, a locally-owned restaurant with two branches. We went to the one in Marietta on a lunch date with some of our neighbors. There were quite a few tween and teen girls in the party plus the baby, so as you can imagine the party was a bit on the loud side, but the restaurant has their floor space divided up into a few sections so hopefully there was at least a bit of a sound barrier. Regular readers may remember that I prefer to write about desserts, and have no fear, there was a rather magnificent dessert involved in this trip – but more on that later.

Bay Breeze is a seafood restaurant that is in head-to-head competition with another locally-owned small chain restaurant, the Marietta Fish Market. They are within a mile of each other, and there is a billboard advertising the other restaurant looming over the parking lot of Bay Breeze! Also, if you look at the reviews you will see a rather interesting number of positive and negative reviews that just happen to mention the other restaurant. I don’t know the whole story, but there is definitely some history between these two places. I have it on rumor that their owners used to be friends, and that a squabble over who would be planting a seafood restaurant on Canton Road caused the present impasse. 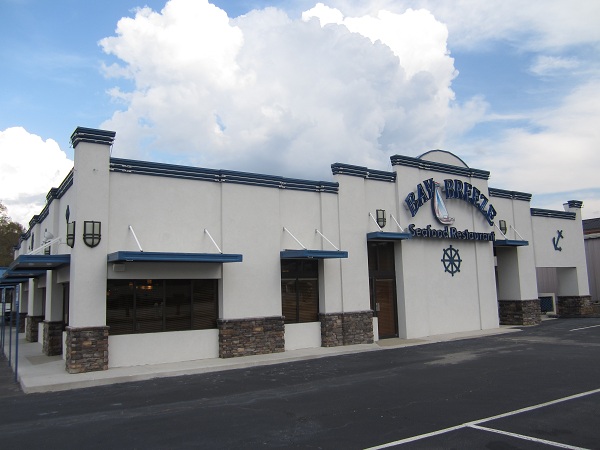 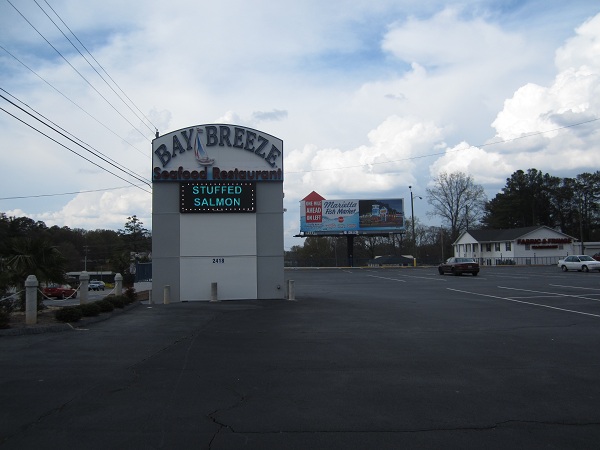 That billboard’s been there since the restaurant opened.

Bay Breeze is a family style restaurant with a great big fish tank and lots of floor space. There is a good deal of ticky-tacky nautical style decoration, including a fountain coming out of a boat, but the set up is comfortable otherwise. The portions are generous but not big enough to choke a horse, and the prices are reasonable. While this is not really the place to go if you want health food, the meals I’ve had here so far have been tasty.

This time I was in the mood for something to clog my arteries and got the fried shrimp. It came out hot, crispy, and just hit the spot. The fries and cole slaw sides were OK. However, the more impressive lunch was on the girlchild’s plate – due to some exceptional behavior the previous day, she was allowed a slice of chocolate cake for lunch. It came with ice cream drizzled in chocolate sauce, and was far too much for her to handle, although quite delicious. We wound up taking more than half of it home.

Overall this is a good place to take families, with reasonable prices and convenient parking and tables. It’s also generally got good coupons floating around, doubtless because of the rivalry keeping competition going.