Since our visit to Buford Highway last month to sample pho and bánh mì sandwiches, I’ve been looking forward to returning to Lee’s Bakery for another, but I’ve also wanted to have one from another restaurant. Chow Down Atlanta’s guide (link dead) suggested that there could be as many as four more places that assemble a better bánh mì than Lee’s. So I decided to visit the restaurant that is number one on her list, a small place in the Asian Square strip mall called Quốc Húóng. It is closed on Thursdays, which is the usual day that I go out and play for lunch by myself, but two weeks ago, Marie and the kids went down to Saint Simons Island while I stayed in town to work some extra hours. This gave me the chance to go visit on a Friday. 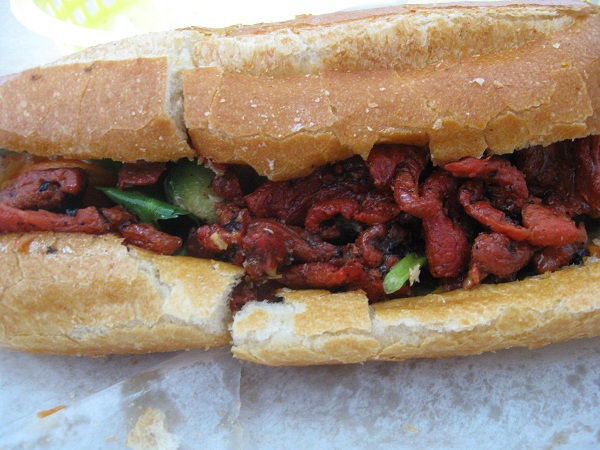 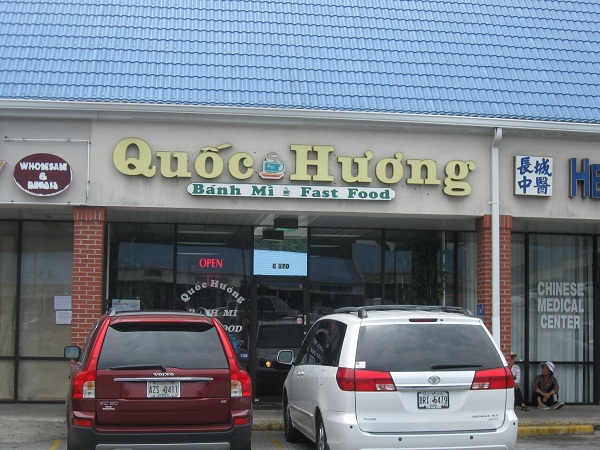 These didn’t quite live up to the hype, but they came mighty close. The prices here are just amazingly good. Most bánh mì sandwiches here are priced at just two bucks each, with a few, like the celebrated bánh mì thit nuong, at $2.50. This comes with deep red sliced roasted pork and a metric ton of vegetables inside an incredibly crumbly and wonderful baquette. I highly recommend getting two sandwiches for under five dollars, eating what you like here, say, half of each, and wrapping the rest up to go, and snack on them later.

The other sandwich that I tried was a bánh mì pate, and it was all right, but really, not even close to as flavorful as the other. I think that the house special at Lee’s has several slices of ham and pork to complement, and perhaps even mask the taste of the pate a little. Left on its own here, the pate was distinctive, but not entirely satisfying. I like the way that the smoky and juicy thit nuong-style sliced pork balances the tartness of the vegetables a lot more, but for only two dollars, it was worth it to try.

I’ll go back to Lee’s the next time I want one of these sandwiches, but I would also like to try Quốc Húóng again. There is plenty more from which I may choose, and the prices are low enough to encourage sampling.

Other blog posts about Quốc Húóng: