We have not featured very many Indian restaurants on this blog overall, and certainly not recently. There are two reasons for this. Indian is about the only cultural cuisine that Marie sternly and firmly resists, finding no pleasure in it, and, last year, I just plain got spoiled by a wonderful place in Asheville called Chai Pani. I enjoyed it tremendously and, discouraged by many years of pre-blogging searching for really good Indian food, I guess that I just drew the line there. I simply have not been in the mood to search for anything new in Atlanta for many, many months.

When Marie’s brother was in town earlier in August, he and Marie talked about Buford Highway, and all the interesting and fun places to eat there. Marie mentioned how she pretty much enjoys any food from any place in Asia that she has tried, with the exception of Indian food, which she doesn’t enjoy at all, while I prefer Indian to anything thought of as traditional Thai, Malaysian, Chinese, Korean or Japanese. I argue that there are superficial similarities between some south Indian dishes and a few Thai entrees that Marie enjoys, but they’re not deep enough for her to be interested in digging further. Their brief exchange got me hungry and I decided to go try a different Indian place for lunch a few days later.

Bhojanic is in the same strip mall as Community Q BBQ, on Clairmont behind Wuxtry Records. The restaurant opened in 2003, but the family’s catering business, Anic, started in 1991. The owner, Archna Becker, is currently hard at work getting ready to open a second location in a murderously tough space in The Shops Around Lenox. Hopefully, this quite good food will find an audience with the Buckhead lunch crowd. 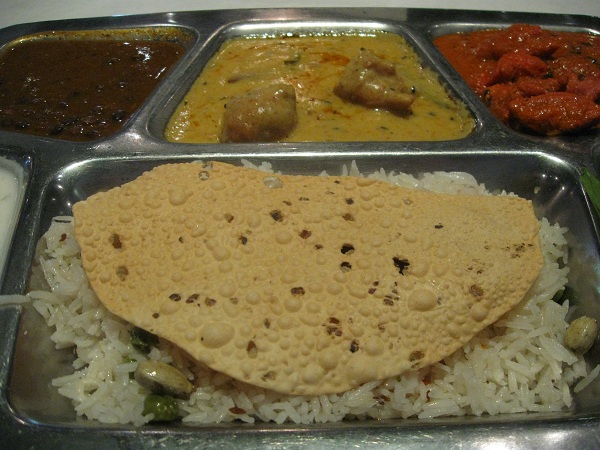 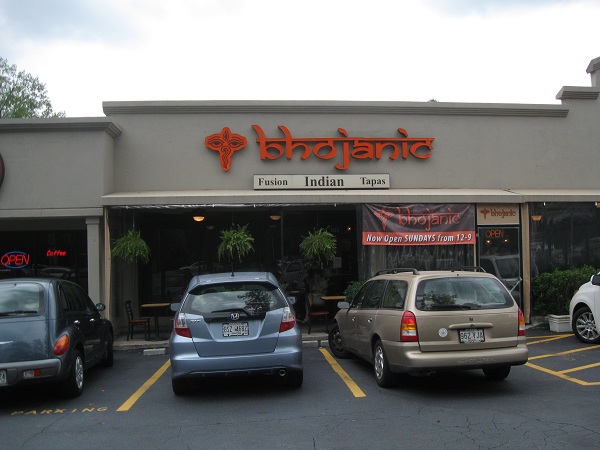 The restaurant focuses on north Indian-style “street food,” with small plates that are ordered like tapas, chat, which is crispy flatbread buried under toppings, or thali, which, here, is sort of like an Indian meat-and-three. My previous experience ordering a thali had been at Vatica in Marietta, and there, the vegetarian-only selections came in a number of small dishes on a large platter. Here, the thali comes out on what’s more like a stainless steel lunchroom tray.

Each thali comes with jasmine rice, chapati (a soft and fluffy “tortilla” of whole wheat flat bread), a papadam, raita yogurt and a small salad. You can then choose from three veggies, one meat and two veggies, or two meats and one veggie. The selection changes daily. I had chicken tikka masala, which was very spicy with flavor but not uncomfortably hot at all, along with a dark chickpea side which was a little uninspired but serviceable, and onion dumplings in a deep, rich, and interesting yellow sauce.

I enjoyed everything tremendously and left quite full. Lunchtime meals are easier on the wallet at Bhojanic than at supper, and so this is a place that I could certainly visit many times without guilt. That said, I think that we’ve done our city’s Indian restaurants a disservice by paying them no attention for so long, and so I think that I should visit a few others . I’ll make an effort to try out another two or three before the year’s out.

Now, I don’t need staff wearing tuxedos, or buffets, or 1970s hardbound menus with plastic laminate peeling everywhere, none of which are present at Bhojanic. I want good, honest food and flavors that I am not expecting, from little hole-in-the-wall joints. I am looking forward to visiting NaanStop, which I understand has just opened, but wonder whether any of our readers have any other good recommendations for me. Leave a comment below, or find us on Facebook!

Other blog posts about Bhojanic: