You know how some restaurants just hide in plain sight? There used to be this mediocre Mexican place down the road from us, back toward the interstate. They had karaoke and refried beans, and not much else. I think that they closed in early 2006 and a Korean place called Tofu Village eventually moved in, and I never noticed, because I never paid attention to Korean food before.

A couple of weeks ago, we were planning to go back over to Buford Highway and try a couple of the Korean places in Doraville, north of the perimeter. I wrote Leslie of The Food and Me for a couple of recommendations, but then Saturday came and we didn’t really feel like going that far. Marie’s brother was coming to town and we were not sure when he was going to arrive, and the DOT’s doing some new construction on the eastbound lanes of 285, and it just seemed like an awful long way to go, and we didn’t feel like it. It didn’t help that I remembered that the last time Karl was in town, he suggested going out for a burger, and we made him ride with us better than half an hour through back roads and neighborhoods to try a new-to-our-blog place in Roswell instead of just going somewhere nearby. That wasn’t the most generous thing I’ve ever done.

So Saturday evening, we stayed in Cobb County instead, although the drive to Las Tortas Locas was still a lengthy one. But as we sat at the light at Sandy Plains, I looked up to that ugly old strip mall and it finally registered with me. “You know,” I told Marie, “there’s a Korean restaurant right there. I wonder whether it’s any good.”

It is not true to say that Atlanta is a culinary wasteland, although there is a great deal about our city that disappoints. Nor is it true to say that the suburbs can be trusted for little more than mediocrity, particularly where food from other nations and cultures is concerned. It’s certainly not at all true to suggest that all of the Atlanta area’s best Korean or Vietnamese or Chinese cooking can be found, exclusively, in the Buford Highway corridor. But stereotypes are awfully hard to break, and it’s natural, albeit unfortunate and unfair, to assume, with at least seven completely crummy American-Chinese Golden-This Happy-That joints within five miles of this strip mall, and at least as many mediocre El-This-Los-That quasi-Mexican places, that Tofu Village was nothing special. But I wondered whether it was any good, and did a little reading. The number of good reviews was very impressive. Just five months ago, the Atlanta Journal-Consitution named it one of Atlanta’s fifty best restaurants.

So Sunday evening, we came back by for supper and were quite impressed. Well, mostly. I wouldn’t put it on my personal top fifty, but it is certainly a very good place indeed. I honestly would never have guessed that we had a place this interesting so close to us, surrounded, as we are, by chains and disappointments. 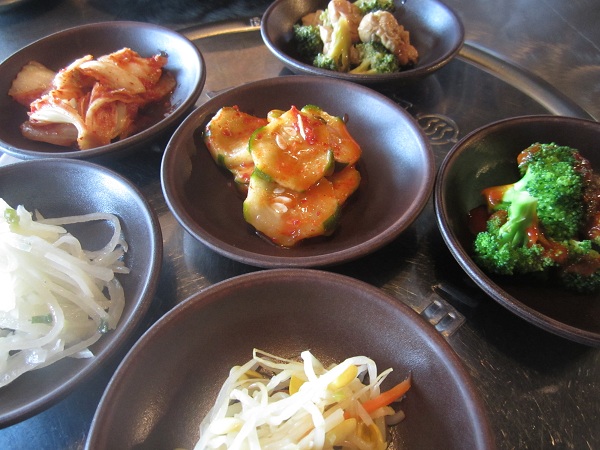 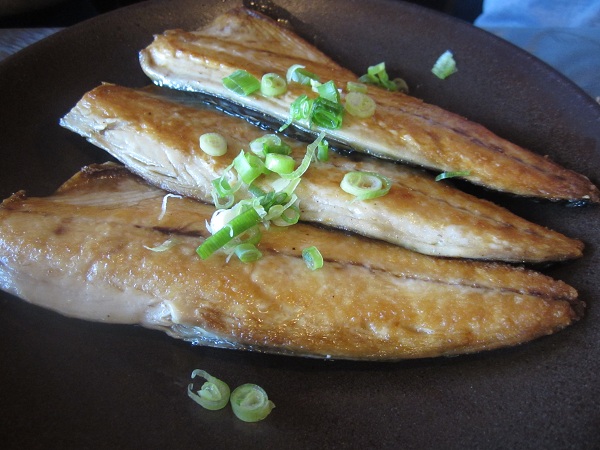 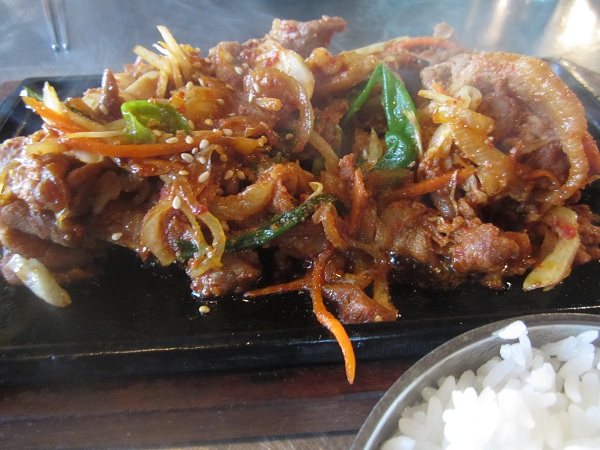 Our meal started with banchan, an array of little side dishes in small bowls. The presentation reminded me of an Indian thali, as you might find a few exits south at Vatica. These dishes included bean sprouts, cucumbers, broccoli, and cold chicken.

My daughter had the only meal of the evening that proved a miss. Lately, she has been testing her limits of spicy food, and so she ordered the spicy myeon noodles. Frankly, neither she nor I were very impressed here. The noodles are served cold, which we found unpleasant, and nothing in the bowl convinced us that we weren’t just eating a bucket of chilled spaghetti with shaved carrots and sriracha sauce.

Our other meals were much more interesting. Marie and I shared an order of jae yuek bok eum, which is very flavorful pork that is served sizzling on a hot plate. We both enjoyed this a great deal. The meat was neither too tough nor especially spicy, but had a deep, lingering and very satisfying taste. Karl ordered the sang sun guh ee, which is Spanish mackerel. This was also very flavorful and rich. 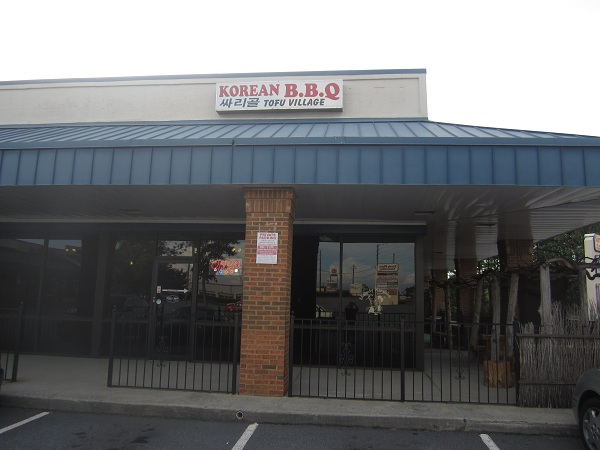 We’re still planning to try some places in Doraville before too long – after all, Leslie gave us some recommendations that sounded very promising – but I’m glad that we were able to start at someplace so pleasing, and so close to home, too. We might even come back this way soon and try their take on barbecue.

Other blog posts about Tofu Village: