Marie and I had been thinking about visiting Crepe Revolution for a really, really long time, and finally stopped by earlier this month. In a previous chapter, I wrote about how our Friday evenings are often spent at home, but we decided to meet halfway this time out and be a little social without fighting the traffic too much. Since my mother lives just a mile or so from Crepe Revolution, which is located in a quite nice mixed-use development in Smyrna that borders I-285 and Atlanta Road, we planned to meet there after work. Then Marie had an attack of Mommy Brain, and drove home instead. We figured it out eventually.

The restaurant was opened by Neel Sengupta, who moved to Atlanta from Toronto in 1996. He met Rob Morneweck in the restaurant business, and they opened Crepe Revolution in 2009. Atlanta has been lacking a place to get crepes for a really long time – the Magic Pan chain had a few stores here, but they all closed ages ago – and, despite the duo’s interest, it is safe to say the concept has not caught on. There was, briefly, a similar concept called Izba that opened on the north side of Smyrna next door to Barker’s Red Hots, but it shuttered after only a couple of months, and there are one or two places that do good business with breakfast crepes, but this joint really stands alone as far as offering a dinner menu of lots of very different savory crepes. 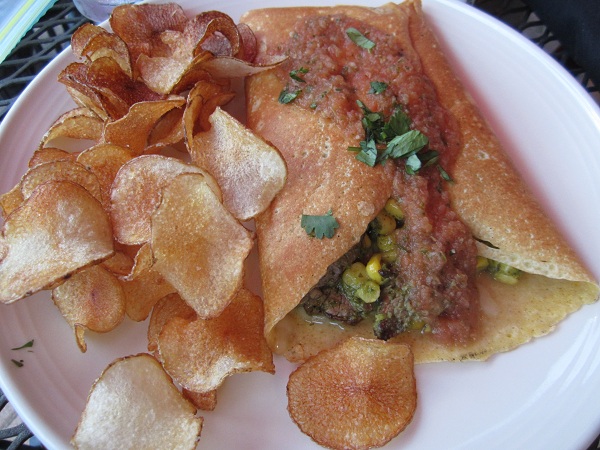 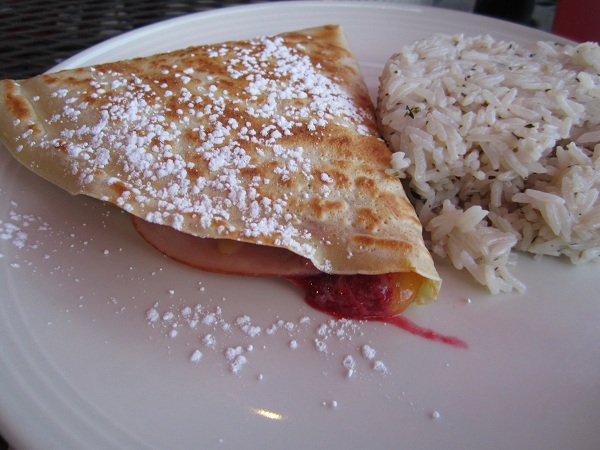 Marie and I were very pleased with the service. Our toddler was having one of his occasional restless evenings and we relocated outside to the patio before he turned everybody’s meal into a spectacle. The food was very good, too. I tried the Carne Asada, with steak, monterey jack cheese and corn with two salsas on a cornmeal crepe. Marie enjoyed the Monte Cristo, with ham, chicken, cheddar cheese, raspberry sauce and powdered sugar. They were both really delicious and I also really liked the house-cut potato chips. These are on the menu currently, but the restaurant rotates their offerings quite frequently and offers a number of interesting specials. 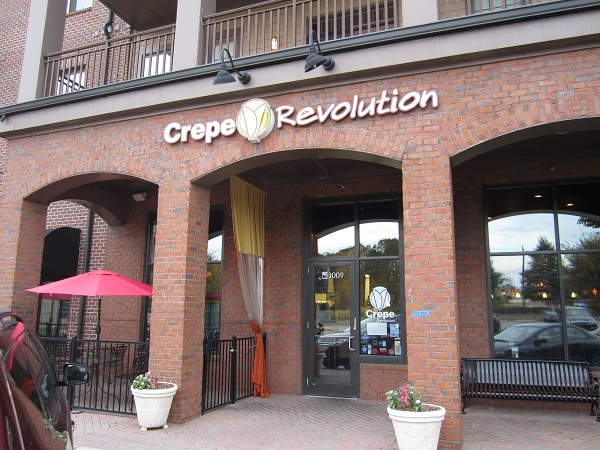 The whole West Village complex is very nice and most of the restaurants seem to bring in a good crowd on weekend nights. Crepe Revolution got filled in as the evening went on, and more couples and families joined us on the patio. The dark-walled interior is very nice for date nights or spending the evening enjoying some bottles of wine, and the patio just fantastic for noisy kids. Once in a while, we get to indulge on a Friday night.

In early 2013, this restaurant changed its name to Table 33, with an accompanying change of menu. They still did crepes, but lots of other things as well. About 18 months later, they closed for good.

Other blog posts about Crepe Revolution:

*ARB’s Malika also presented a quite wonderful video from Crepe Revolution, showing off this place quite well while talking about her blog. You can watch it on YouTube.