Marie and I took the baby over to Doraville on the Saturday before Christmas. Along the way to lunch, I pointed out White Windmill to her, telling her that’s the mean old place whose mean old hot tea hurted my poor little helpless tongue. Marie nodded and agreed that she’d have to try that tea sometime. Sometimes, dames just don’t listen.

Woo Nam Jeong has been on a shortlist of Korean places on Buford Highway that we have wanted to visit, based on lots of reports and recommendations. The report from ATL Food Snob – linked below – had us most interested. It was obvious that this was a place that we needed to try for their specialty, something called bibimbap. It’s a sizzling rice-and-proteins dish served up in a stone bowl, and accompanied by the traditional “banchan” dishes of sides.

Apparently, each Korean restaurant will have its own ideas about what to send to the table as banchan. This is only the third time that we’ve enjoyed a meal with several of these sides, and I think that I enjoyed these even more than what we were served at either Tofu Village or Hae Woon Dae. Here, our sides included some cucumber with excellent spicy sauce, and a wonderfully tasty little dish with slices of apples, radishes, and onions in a very light mayonnaise-based sauce. 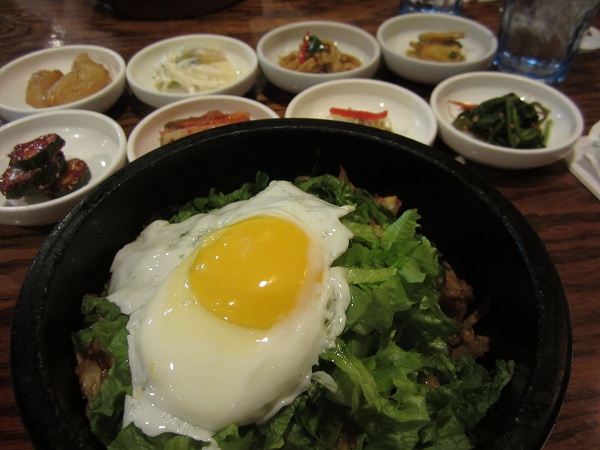 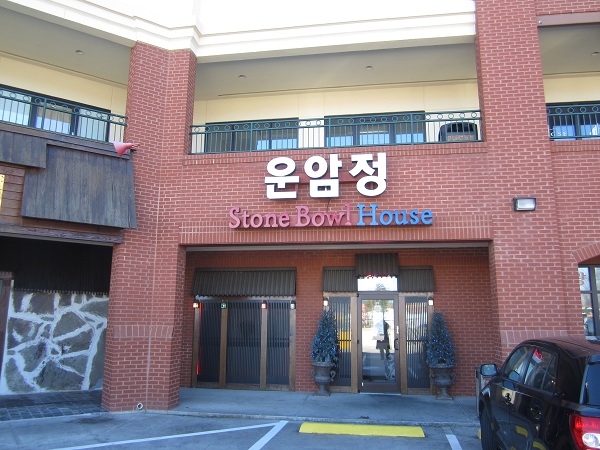 Woo Nam Jeong opened in early 2009 under the aegis of an incredibly sweet lady who goes by the name “Grandma.” She came out to check on us, and make sure that our server had done an acceptable job mixing up our bibimbaps. Grandma doesn’t look like she wants to retire anytime this century; she is having too much fun at her job, although she did agree that she needed one day a week to relax and not cook, so the restaurant is closed on Wednesdays. When she is cooking, everything gets hands-on preparation in her deceptively small kitchen.

As for the bibimbaps, I thought they were just fine without being remarkable. I confess to a little confusion about what makes the dish’s fans so enthusiastic; it is, effectively, a big bowl of fried rice served in the style of Tex-Mex fajitas. After our server mixed our bowls up into a big, amorphous glob of food, we agreed that this was solid but not amazing. Frankly, I would have been just thrilled to have a giant bowl of those completely fantastic cucumbers. Since they nail the banchan so well and serve up a pretty good entree, this is certainly a restaurant worth visiting if you’re in the area and curious about Korean cooking.